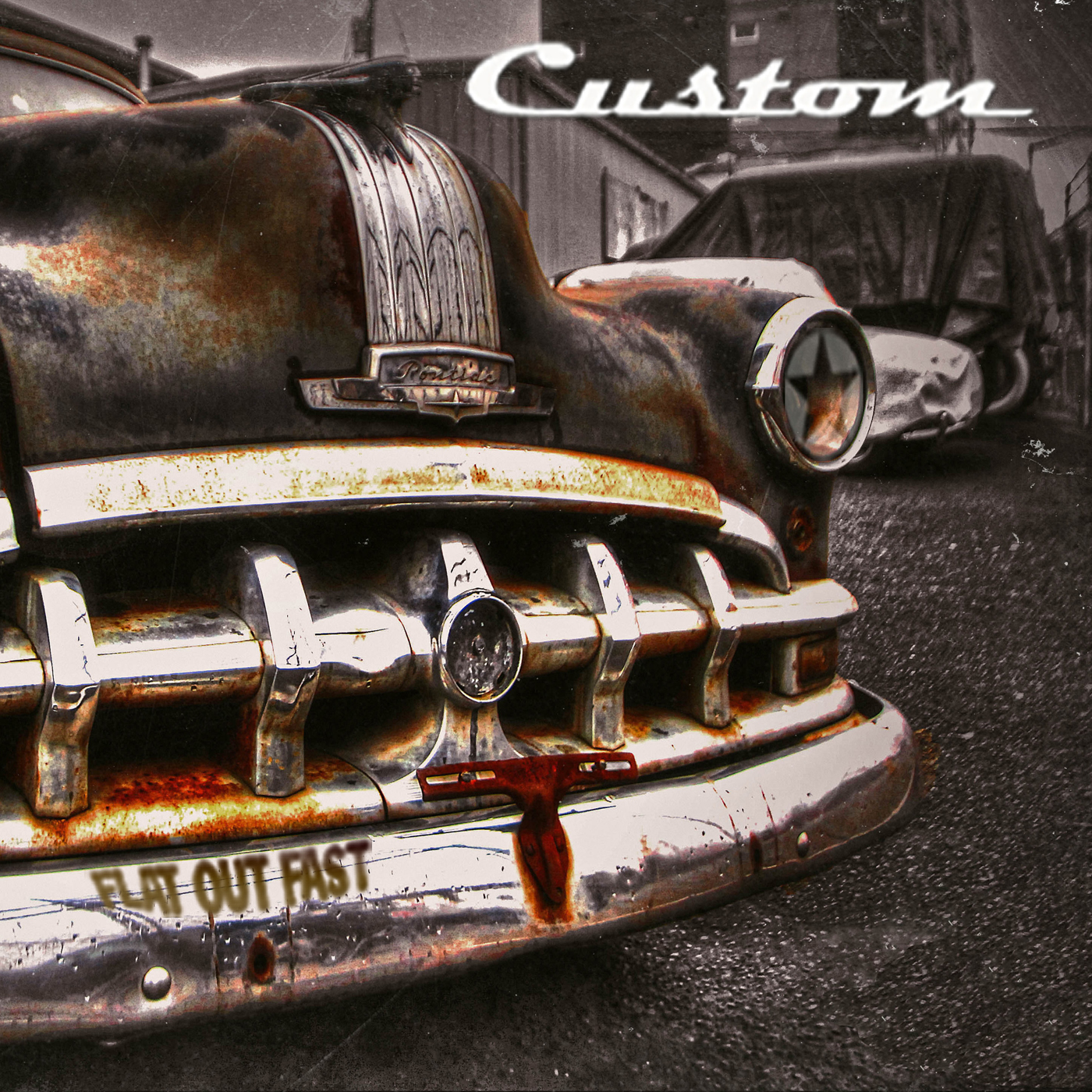 For those of you hoping that this was the mid-90’s laid-back band known as Custom…move yourselves along please…laid-back is definitely not the case on Flat Out Fast, the new album from Seattle’s version of Custom, born over a decade ago in the middle of 2002.

Keep in mind…2002 is long after the music-scene in Seattle imploded…but the influence still remains. It does however show itself fairly rarely on this latest album from Custom. For the most part, you’ll find variations of hard-rock, rarely dipping into the alternative or grunge sounds. The first hint of Seattle doesn’t reveal itself until the third track “Because Of You,” which sounds like it might have had a secure place in the Alice In Chains catalogue during their early years.

Hard-rock, as many of you know…is one of the genres I can be particularly tough on. Many of those reasons find their way onto the Flat Out Fast album here; riff-rock, party-music, and any comparison to Kiss, Van Halen or Extreme that you could possibly make. Just because those things might not be for me…certainly doesn’t mean they wouldn’t be for you. For what it’s worth, this is a pretty tight band that really manages to rock hard and Flat Out Fast as the title promises.

Instantly pounding away – I gotta say, the opening guitar line, drum and bass-crunch had me interested right away. Jacque Hartless, vocals…again…he does his thing well…but if anything had me wondering about me clicking with the music of Custom, it was him. With extreme dynamics, theatrics, dramatics…you can literally hear the ‘flair’ of rock flamboyance in his vocals; a sound that either resonates strongly with you, or flat-out doesn’t. The chorus is anthem huge and stadium wide…you can literally picture the fists pumping away in support.

“Buzz Zone,” again shows some pretty rad moves from the guitar section led by Corey Petro & John Norton…these guys not only play fast & furiously, but they come up with some pretty incredible parts. Hartless fits this track in a slightly more modern-style, but for the most part still manages to make the track throwback to the old-days of stadium-rock. The guitar-solo near the two-minute mark is seriously impressive and overall, I dig the structure and lyrics of this tune as well.

Switching up the style and tone…they pile in loosely to the bluesy “Because Of You.” Here you almost get a King’s X-ish performance from the band and certainly lead-singer Hartless. He’s dialled back and settled into a much more melodically dark line here, but still reaches up to the highest of heights alongside the music. It all fits much better here in the bass-led track; Paul Yarnold is keeping a simple but completely effect groove rolling along on this track until they explode into the chorus. This is an incredibly tough song to sing and Hartless pulls it off admirably.

“Flat Out Fast,” is exactly as they say. This is Van Halen on a large mountain-sized amount of cocaine-fueled energy. It’s an interesting track for the simple fact that the music is moving incredibly faster than Hartless vocal-flow; it’s like he’s moving in slow motion by comparison as drummer Brandon Wilsey puts on an intense display of precision drums in an extremely ripping beat.

Diving back into a dark-riff and EXCELLENT vocal sound here, this track might borrow a little from the Staley/Cantrell sound in their harmonies but man are they doing it well here on “Trust And Tolerance.” Absolutely stellar performance from the entire band here, including another truly shredding solo as this track builds toward the ceiling. It’s a rough, rumbly, dirty-grunger of a track with slight cracks of light thrown in for decoration…great track.

More classic-rock riffs played at a feverish pace in “Callate Su Boca,” and in “Killing Time.” Both of these lightening quick guitar-soaked monsters tick along like perfect machinery. “Killing Time” stretches vocalist Hartlett right to the edge of a whine…it’s a tough part once again…he writes himself just slightly out of reach at times.

Backward a step to “Punching Sand,” and you’ve found this band at their slaughtering-best once again. This is another excellent riff-based track that has the space to really let it all shine through. Challenging and complex in the beat and performance, these guys display some excellent talent here. It’s ‘fight-music’ – which should have been on my list of hard-rock clichés and don’ts, but aside from the lyrical aspect, they’ve put together another killer here.

Smooth bass-tones open the beginning of the final cut “Say Goodbye Again,” which has some purely excellent tone in the guitars as well. Like a slow-version of a Tool song, this track grooves slowly with a dark and steady groove. Hartless nails it here in this track, guitar tones are just perfect in this song, I can’t stress that enough. “Say Goodbye Again,” is the track I think I had been looking for from Custom…and now that it’s here in this excellent final cut…I find myself instantly wanting to say hello to them all over again.

Find out more about Custom at their Facebook page: https://www.facebook.com/CustomSeattle/