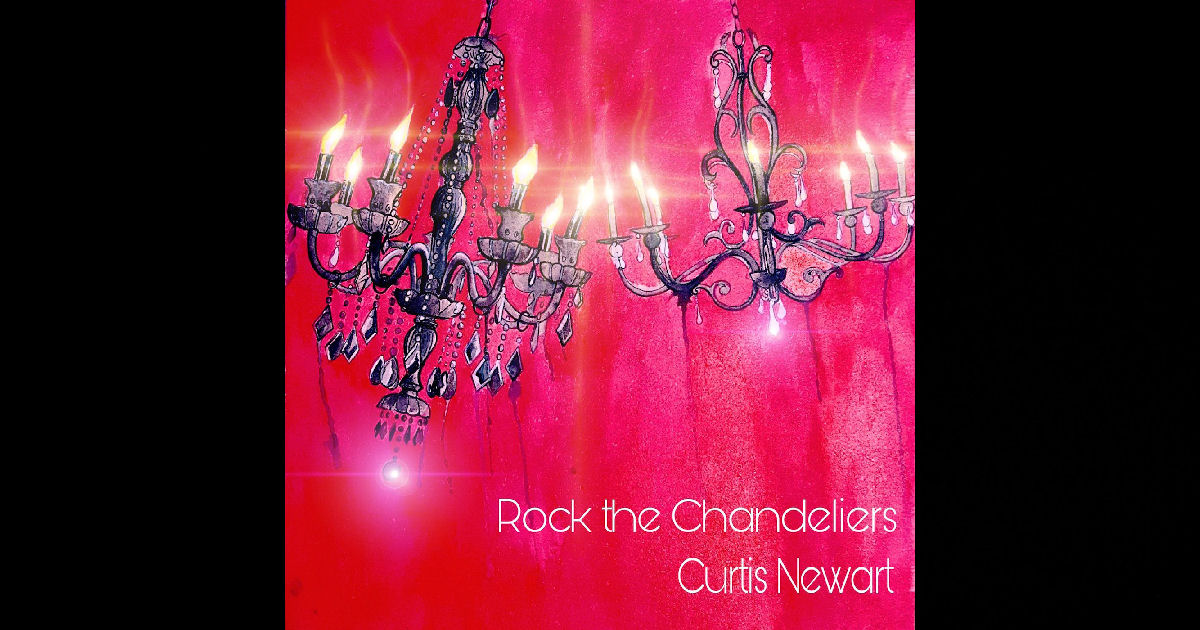 There are definitely multiple redeeming aspects of what Curtis Newart has come up with on his single “Superhuman” that highlight the fact that he certainly knows what he’s doing.  He’s obviously innovative, creative, and wildly expressive when it comes to his sound & style…and there’s a lot of good in that.  Still ain’t gonna lie to ya – this is a bizarre little ditty right here.

I think what weirded me out the most was that…I mean…alright, so there are several layers to that taco.  I loved that you immediately get a great mix of hyperactive-but-chilled-out Electro-infused sound and a real brightness in that energy that instantly makes an appeal for your attention.  As far as the beat goes, no problems there either – maybe a bit of contrast between the piano & strings; I dunno…sometimes that worked well for me, sometimes it sounded like an odd fit.  And then there are Curtis’ vocals…which were perhaps the most confusing part for me personally when I was listening…but let me explain…

At times, it was like hearing my favorite singer.  Not just saying that generally – I’m talking about THE specific dude I adore above all others – Michael Stipe.  So…there’s a couple things that come with that, the first of which is of course to point out that, no, he was far from perfection when it came to tones & all-that.  Might be perfect to my ears and what I personally want to hear more than anything else in the world, but I can still recognize that sometimes he was a perfect fit, and sometimes he just wasn’t in spots.  Definitely not a song I can recall that doesn’t have multiple points of redemption in his own vocal performance, despite whatever the overall outcome of the opinion on the final song may/may-not be.  There was always a reason, or several reasons, to listen to an R.E.M. tune.  The question became, was this an honest influence…was this a sound Curtis was born with or that he wanted to have – or both?  After I learned about more about his latest album called Rock The Chandeliers, and realized that there was a cover of R.E.M.’s “Man On The Moon” on there as well – I felt it was safe to conclude that it is both; they’re certainly an influence on him if he’s covering them – but MAN does he SOUND like Stipe at times as well.  Uncanny really.  I mean, if I had to hazard a guess, I’d be willing to bet that Curtis and I probably share this supreme love of all-things-Stipe & R.E.M. – it’s not just the sweet tone of Michael’s voice that he’s got going for him, but Newart really embraces a similar frantic energy when he sings.

So really – how could I object to this?  I can’t!  In many ways that would be like rejecting the creativity, art, sound, and spirit of one of my own heroes…and how could I possibly do that?  That’s how much Stipe that Newart has in him…not guilty via the sheer love of the influence and his commitment to really following through on a path that Michael was starting to carve out & never quite finished.  I say that because, if you listen to just about any of the solo endeavors that Stipe journeyed into while both in & out of R.E.M. later on – you’ll know that a song like “Superhuman” is much more akin to that sound.  A bit more of what you’d consider to be experimental than standard Rock-fare, a little more self-expressive & artistic, and a lot more of a foray into the electronic side, which could never have been explored within the confines of the R.E.M. world without potentially souring their long legacy in music.

You can observe more similarities between Stipe and Newart as well in the writing & lyricism for sure.  Keep in mind…again…I’ve said it here a million times before and I’ll say it again here for the record – R.E.M. is, was, has been, and likely always will be my favorite band.  If you were to pin me down and ask me WHY that is, I don’t even know that I’d always be able to answer…it’s a combination of many things – but for the most part, I suppose it was just because I found multiple ways to connect to everything from the lyrics to the music & an expression of emotions & melody in music I hadn’t heard from others.  Did Stipe have moments where he’d try and rock that boat & shake our confidence in his music & band?  Of course he did.  In fact, if you look at many of his lyrics, you’ll find a fantastic mix of insightful wisdom, heartfelt observations, and quite honestly – brutal clichés that often felt like he could have avoided them or perhaps made more interesting choices.  But there was also an innocence in selecting those certain phrases we’d heard before like say, “you want the greatest thing since bread came sliced” on “Imitation Of Life” that would show just how human he was at times…almost proof that he could have created something more challenging from all his surrounding words, yet bringing it down to a more common level that each and every one of us could identify, without sounding like he was dumbing it down so much as just allowing his honest perspective and thoughts to grab the vibe & fill the song.  I get a bit of that here in Newark’s lyrics as well…we’ve heard lines like “you’re able to move mountains” or “not all heroes wear capes” before…but these again represent those more earnest & humble ways of describing what he’s trying to say on “Superhuman.”  There’s ultimately big moments of redemption as well, through clever lines that become the hook, much again in that Stipe-esque style, like when Newark sings “you deserve a crest on your chest,” which has that indie uniqueness & sincerity that resonates.

And then of course, you could also draw a line from the fact that R.E.M. wrote a song called “Superman” in their early days on Life’s Rich Pageant in the 80’s to “Superhuman” here now and its similar themes.  Chances are, there’s another link between Stipe’s ideas and Newark right there on display for us all to discover.  Don’t get me wrong, ultimately we’re still talking worlds apart between the Newark sound & that of R.E.M. – but again, really not too far from Stipe’s few solo cuts or what you’ll find on his many collaborative efforts.  You’ll hear that similarity between the drama in the vocals of both singers and the way they phrase their words poetically, as well as the tones they both choose to sing with too.  And just like many of those tunes that were once at first harder to accept or enjoy due to just how different they were from his main band when Stipe would duck out on a solo adventure or collaboration – I think that’s a lot of the magic at work here now on “Superhuman” by Newark today; you might not even get this at first – you might find the whole construction of this tune as perplexing as I initially did too…but if you let this cut spin, believe me, it will sink in.  Within a couple repetitions, I can pretty much guarantee that if you dig the same music that I do, you’ll notice that this “Superhuman” tune from Curtis Newark goes from good to great pretty damn quickly.  The more you listen, the more you understand the structure & sound coming at you, leading to the endearing sound at the heart of this sentiment & sweetness in “Superhuman” working its magic through repetition…and probably more fast than you’d assume at first, soon, you’ll like, NEED this tune.

I know he’s certainly got me interested in hearing more.  The more I checked out “Superhuman,” the more I really felt that attachment to this wild display of melody…and by the time I was done writing this, felt like it more than justified to give this single a strong nod of approval; Curtis Newark is cool with me.

Find out more about him from his official website at:  https://www.curtisnewart.com