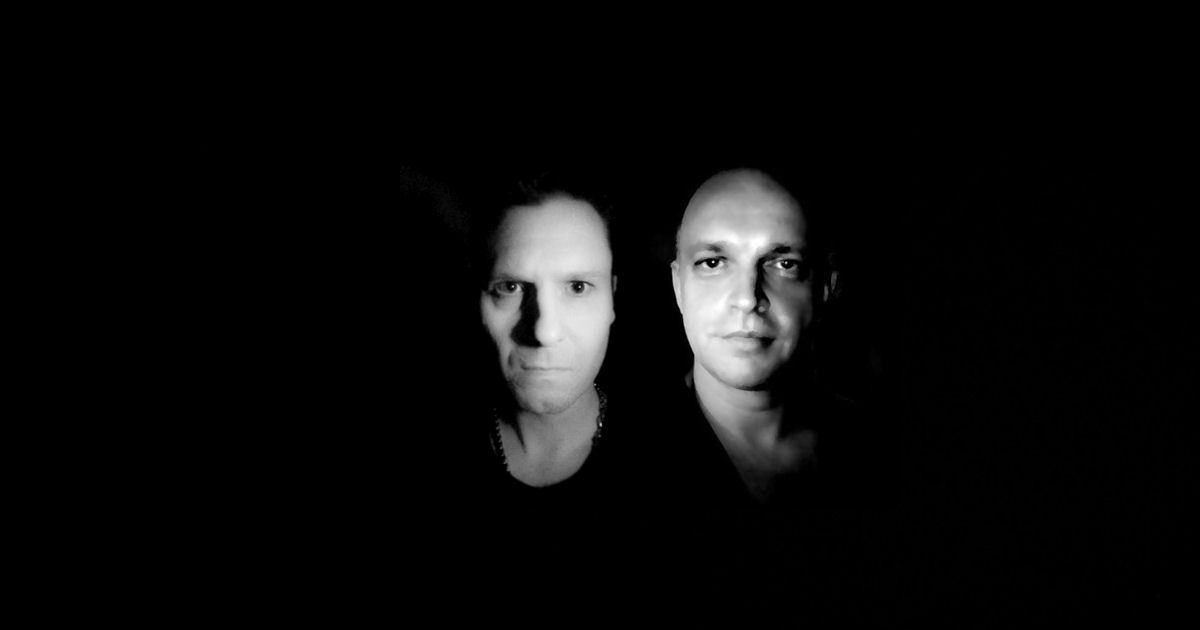 Two dudes create the core duo in Cosmic Orphans, one English, one Slovenian – Brandon Kirkham & Tomaž Goršič by name – I’ll let you guess which one’s which…

They’ve got three new singles here in review today – all of which have videos online to support them, all of which seem to have come out month after month in a steady stream in 2019…I’ll post one up for ya later on down below somewhere…keep an eye out for that.  I’ll also be spinning one of these tunes from the Cosmic Orphans on the upcoming episode of the SBS Podcast as well…so keep an ear open for that too!  I’m always inspired by bands & artists that make a decisive push to get their music out there, and clearly with the consistency, quality, and frequency of the Cosmic Orphans releasing their songs, videos, and singles onto the internet already this year, it’s obviously ‘go time’ for this duo.  When you’re this invested in your music & the moves you’re making – I like to think we’re right there with you in lockstep, just as interested as the artists/bands themselves are.  Or at the very least, that’s how excited I become.

No matter what the genre, the artist, the band – the whatever it is when it comes to music – you know I’m realistic about what I hear, but the ultimate satisfaction always comes through visually seeing just how much a band is engaged in their own career…what their OWN excitement level is – not just mine.  Genuine passion is always something you can hear & it’s the best incentive to listen further; when it comes to the music of the Cosmic Orphans, you’ll hear plenty of it on display from song to song.  They might have a gentle sound & a fairly laidback easy-listening folk-style goin’ on, but make no mistake, you can hear from the quality of the songwriting and their focused performances that they’re clearly putting their hearts & souls into their music – and that always makes a huge difference for me.  In my humble opinion, as listeners, that should matter to YOU every bit as much…and hopefully, that’s the case.

Have I said numerous times here at these pages that it can be way, way tougher to get the people excited and amped-up about the mellower side of music?  Yes, yes I certainly have.  Do I ultimately think that the Cosmic Orphans have an uphill battle ahead of them to get these singles out there to the masses?  Yes, yes I certainly do.  Does that mean it’s impossible?  Nope!  Are there numerous reasons as to WHY they’ve got a shot at a spot on your playlists and making an impact out there?  Absolutely.  So many questions, I know, I know…let’s see if I can get ya some answers by pushing play & having a listen.

What first jumped out at me in listening to “Goodbye Michelle” was…wait…an Englishman & a Slovenian making music together…and there’s a Reggae twist on the whole sound of this first single?  Like, I’ll put it to you this way…I’m on record about a million times by now as not being the world’s biggest Reggae fan by any stretch of the imagination – but when you’re telling me that’s the first sound I’m gonna hear from two dudes, half a world apart, from Ljubljana & Manchester respectively…and REGGAE is somehow the first thing they’ve got for my speakers…well…what can I say?  You’ve got me interested!  That seems like it…almost defies logic somehow, yet also proves exactly what I believe and what I know for a certain fact that the Cosmic Orphans believe as well – which is that music is our most universal language.  They’ve written about it on their social media pages, they’ve proved it through the music they’ve made together already as well – especially when you hear them adapt into a cultural style of sound that would have originated far, far outside of either of their homelands.  Truly…if that’s not proof of that universal strength in sound, I don’t know what would be…Reggae traveled the world of course, but the fact that it landed on both their shores & became one of the instant go-to styles, is actually really interesting to me.  All this being said…it’s TINGED with Reggae…I’m not saying it’s such a dominant trait that I couldn’t get into it…Cosmic Orphans lean into folk, indie, pop, worldbeat…you can hear there’s a genuine crossover sound at work here.  What I really like about “Goodbye Michelle” is how incredibly natural it sounds; it’s got an organic sweetness to it that feels like an authentic reflection of the humble creators behind the music & vocals we hear – and I dig that.  It’s a love song of sorts at the end of the day, but with its own unique, imaginative, and colorful descriptions along the way, with a mix of emotions on display that really shows how well they can craft a song.  Moments like when they sing “I can make it up to you/oranges and lemons to brighten up your day” has a real magic to it…there’s a perspective there…an ability to communicate sincerity in their own identifiably sweet way…and I believe people will connect to that for sure.  I mean, it helps that the hook of the chorus those words are in feature an uplifting vibe that runs beautifully through the way they sing & play it…Cosmic Orphans might be singing “Goodbye Michelle,” but for many listeners out there, it’ll be “Hello & Welcome” to a new tune on their playlists.  For me, I’m a melody guy through & through…they’ve got plenty of it here right on the surface for all to enjoy…whether Reggae is your thing or not, it’s tunes like this one that borrow just enough without threatening to alienate pretty much anyone listening…that’s how you know the crossover appeal is real.  It might be tender, it might be mild – but “Goodbye Michelle” does include a lot of warm, inviting sound.

I think as far as where I’m at personally with the music of Cosmic Orphans, I got the most out of their March single, called “The Ballad Of Sgt. Gray.”  A lot of that has to do with the amount of stunning details in the lyrical imagery…again, songwriting-wise, I don’t think many people out there could take many points away from this duo in how they craft a song.  We ARE talking about that songwriter-y style though…your Cohens, your Bowies, your Simons & Garfunkels…that kind of mix in sound & approach you’ll find on this tune from Cosmic Orphans.  And like I’ve been saying, whether or not it’s a ‘mainstream’ vibe or not, doesn’t really matter – tons of people out there love this kind of involved stuff.  The emotion runs heavy in the atmosphere of the verse, and when it comes to the chorus, the sound brightens-up, even if the lyricism remain set in their melancholy ways.  They’ve got an official video to go with this one too, which definitely helps bring the themes of this song to a more vivid clarity for all to understand onscreen in a different medium.  I’m certainly not a guy that ever dwells on the numbers-side of things when it comes to music & art…I barely even acknowledge their existence for the most part, because I don’t want to let that ever interfere with my own craft; but perhaps there’s something to the fact that of the three singles here, this cut seemed to generate the most interest so far with the people out there.  In my opinion, that’s a fairly accurate reflection of how I’d say I feel as well when it comes to “The Ballad Of Sgt. Gray” – I really get into songs like this that tell an authentic story.  This particular single really has the advantage of a video that connects right to the core of the themes and fills in the story we’re listening to in the song spot-on…or at the very least, that’s how I felt about it.  Great job on the harmonies…I love how the synth sounds really add to the melody of the vocals as well; the contrasting Pop-style pep in this song’s step when the chorus kicks-in might be a bit of an odd choice ultimately, but I also feel like the Cosmic Orphans have an energy and hook there that can’t be denied.  Though for myself personally, I think it’s the engaging tone of voice in the vocals and the compelling story found throughout the verse that seemed to draw me in the most…I dig this kind of writing for sure.

“The One” might be the tune that flexes the largest range of diversity in sound, believe it or not, even after all the hybrid & fusion-inspired tunes we’ve already talked about!  But somewhere in between the worlds of music by David Bowie and ABBA, you’ll find this single by Cosmic Orphans nestled comfortably in the middle waiting to be discovered.  I know, I know – it’s not your typical description or comparison that’s for sure, but I’m tellin’ ya, you’ll hear it when you check it out…and somehow, it works fairly well in their favor.  I think that there’s definitely an uplifting thread that runs tightly through the vibe & aura throughout the atmosphere of “The One” – that’s the major plus; it’s also a love-song that packs in a lot of sweetness, enhanced even more onscreen by the video they’ve got supporting it as well…all this stuff leads to positive results on this final tune in review here.  Where this song faces a bit of a battle is in the pace & tempo of it all…Cosmic Orphans play it & sing it spot-on, that’s all well & good – but the reality of mid-tempo tunes us that they always have a tougher climb up the charts than most & they’re generally just as hard to pull off live.  Essentially, “The One” is too pepped-up to be a ballad or an Easy-Listening tune, and too laidback to become a verifiable Dance or full-on Pop single…so in terms of placement out there, you’re likely to find a track like this both everywhere and nowhere at the same time, you feel me?  That’s neither here nor there though…and hopefully, that’s not what’s driving these two music-makers – ultimately, I get the sense they’re much more in it for the true love of the game & testing out what they’re capable of, willing to take the time to craft songs & music into artistic designs that have their own unique beauty & stamp of identity in sound.  They’re definitely going about everything the right way, that’s for sure…they’ve already given you a variety of songs & sounds, all with their own videos to go with’em, and they’re all coming out in a steady stream online for you all to enjoy so far in 2019.  You kinda have to assume that Cosmic Orphans are gonna keep this momentum rolling along…I’d say it’s safe to bet we’ll be hearing a lot more music from this duo over this year to follow & long beyond that.

Find out more about Cosmic Orphans at their official page at Facebook here:  https://www.facebook.com/Cosmic-Orphans-2311347889111186