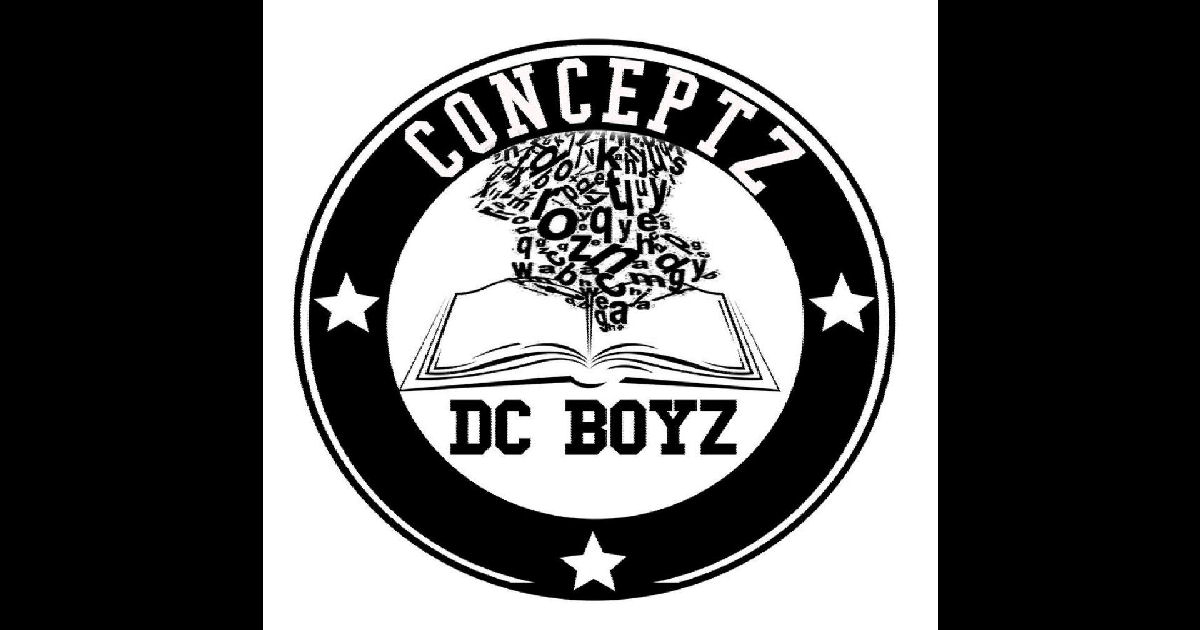 Just gimme a second…I’m almost ready to start this review.  I’m just doing some quick math here and I’ll be ready to let these words rip…

…alright…yep…I’ve double-checked all these calculations I’ve done…everything seems to add up to success when it comes to the music of Conceptz.

Timeline-wise, there’s a few discrepancies when it comes to the numbers…we’ve got three singles from what looks like last year and one brand-new one for their single “Grind Mode.”  Not like a year is old by any stretch of the imagination – that’s still plenty fresh; checking out the supreme video they put together to support the track posted-up at the end of 2016, called “The Band,” I felt like everyone out there would definitely feel the same as I did, all based on what I was seeing and hearing.  The concepts driving the video sold me – I loved the wigs & the jerry curls, the jokes about activator, the idea that there was one of the four that was really the ‘star’ of the show – all of this was executed perfectly onscreen and you can understand immediately that Conceptz have both humor and skill in their arsenal without a doubt.  The verses…the rapped-out bars…I mean, I don’t need to sell Conceptz, just have a listen for yourself, this music sells itself!  There is a TON of personality and charm, skill and execution in this crew.  Crisp beat, complex rhymes spit with confidence…perfection in the cadence and flow, those ‘octaves are beautiful,’ as they’re quick to point out.  The main hook in the chorus…probably needs a bit more something-something…I’m not even sure I know what…just seemed a little bit bright in its tone by comparison to the slick roll in the verse or maybe a little too simplified by comparison to the rest.

But here’s the thing…here’s what had me double-checking the math out there right now…because something didn’t add up.  I’m not going to argue that “The Band” is the ultimate single of all-time – but I am going to go down swinging as I attest to the fact it’s a damn good song.  I might not love the chorus, but it still fit, you feel me?  Nothing was that out of place…and what was impressive, I felt, was extremely impressive and worth a shout out or two for their efforts from the corner of musical approval.  I don’t usually dwell on numbers too much, but something is clearly askew in the universe of the Conceptz if a video/song like “The Band” has got 49 thumbs-up and 30 thumbs-down (at time of publication) – that makes zero sense to me.  I might not know much about the internet, but I know it has usually got better taste than this – I think the effort from Conceptz was put in, the results were there on “The Band,” they made a highly entertaining video and great song with an old-school hip-hop approach…makes no sense to me that anyone would feel strongly enough about it in the negative sense to give it a thumbs-down.  When you look at the comments on the video…and you realize that EVERY single person that took the time to say something, said something POSITIVE – like I’ve been saying, there’s some fishy math on this particular cut…because this don’t add up.  I think they did a great job on both the video AND the song for “The Band,” and as far as first impressions go, this was memorable.

Essentially, if it was all based on that one experience alone, believe me, I’m on the side of Conceptz – those thirty haters out there need to get their eyes & ears checked, cause they ain’t makin’ no sense.

As we go back in time a little to just earlier-on in that same year, they didn’t run into that problem at all.  The inventive and creative video for “Break It Down!” was entirely well received overall and deservedly so…arguably, it’s probably a slightly better, more accessible song than “The Band” might have been – but we’re not talking about something so different from the other that it should have made that much of a difference in the support you see from the fans or the hate from the haters out there.  I feel like you get a solid dose of their verbal skills as they flow with perfect metering and rhythm for miles; they keep it light both onscreen and in the music, adding in scattered jokes because you can’t help but take these guys seriously when it comes to how talented they are.  Love the music on “Break It Down!” – they’re hardly using any at all and relying on the crisp snare to set the guidelines with little else around it – but somehow, it all seems to be the best atmosphere they can be in & they lyrically thrive.  Emcee after emcee, mic-handoff to mic-handoff, they all take turns slaying their bars and keep “Break It Down!” completely entertaining.  Amazing descriptions and imagery in their words to begin with, their videos take Conceptz even further by cleverly matching what we see onscreen to the what the words are suggesting, all edited to the nines and looking extremely sharp.  Fans of real hip-hop will dig this.

“Complete strangers support us more than our friends do.”  I want everyone out there to think about that line for a moment…and then you best get your asses up out them seats and into the club to support your own homies – because what they’re rhyming about on “Backwards,” well…this is the reality of the independent music-scene for all-too-many out there.  I’m a huge fan of making music personal – the more of ‘you’ I can hear is put into the music & words, the better chance you’ve got in securing me as a fan…so “Backwards” became a real highlight in this set for me as I was listening.  There’s no doubt that Conceptz gets more personal here…some of these realities are grim and they perfectly describe how many of the odds are stacked against them, but also display verbally that they’ve far from given up hope.  After everything I’ve heard, I firmly believe that Conceptz have every reason to continue on – the depth of talent between this crew seems to be audibly limitless, they’ve got great ideas, they put the work into their music and clearly into their videos as well…in my opinion, they’re doing everything RIGHT – and people should be tuning in to turn these guys up.  “Backwards” details the struggle, details the amount of self-doubt that comes along with pursuing your dreams, details the reasons as to why they’re not giving up and why they keep on rappin’ for y’all.  I’ll say this much…the mainstream doesn’t deserve these guys…independents out there unite, support and encourage the Conceptz with their art & music…because it’s on us to keep them on the right-side of the fence where they’re truly appreciated before they get snapped up by the suits’n’ties that don’t care half as much about their creative freedom.  Right now, they’re clearly in full-control…and even though the descriptions of their journey forward are freakin’ TOUGH to listen to in the sense that it’s like the world is fighting against their true destiny…right now, they still get to present and relate that reality to us exactly as THEY want to, without interference.  Talent like this should always be left alone to its own devices…but the music should always be enjoyed by everyone universally…that’s how they design their material, music & videos; true art always needs that extra support for some reason…so do the right thing and go out there and give these guys the thumbs-UP on a couple of their vids because they’re doing a downright amazing job with every move they’ve made – on their OWN.  Well…not totally I suppose…they’ve got a credit for Hydra Management on each of these videos, so shout-out to those guys for sure…that’s obviously a place with people that can recognize sincere dedication and true talent like you’ll find in the Conceptz crew.  But you get what I mean…and if you don’t, “Backwards” will fill you in on the details – as talented as they are, nothing in life comes easy and it’s still been extraordinarily tough to get their name out there as far as it should be going to reach the people.  No reason Conceptz should be going “Backwards” at all – these guys are dope, straight-up.  Track after track and bar after bar, they continually impress lyrically, samples are on-point, flow of the rap is always top-shelf material…maybe a hook or two where the harmonies could be a slight bit tighter, but overall, these guys are a progressive example of what the old-school sound is or SHOULD be today.  They’re true professionals – you can see that onscreen and you can hear it in the music they make.  Songs like “Backwards” do a lot to provide levity in the situation…it’s a seriously real track that’s loaded with plenty of insight on what it’s like out there in the world today as a career musician, performer, entertainer, rapper…artist.  You get the idea – none of this gig comes easy, even when you’re at what seems to be the top of your game, it’s still an intense battle to the top of the charts from there, which is ultimately a lot of what “Backwards” is really all about, trying to make that mark.

And with that, they bring is into the current with “Grind Mode,” a track that shows the crew is fully intact and still firing on all cylinders.  My previous issues with the hooks seems to have worked itself out on their latest cut – this all sounds tight and right where they need to be.  Enlisting the assistance of their homeboy Styles P with an inspired performance on the m-i-c was a solid choice – so was the content of the lyrics they’ve put in here.  If there’s ever been a response to the emotion and hard-times indicated in “Backwards,” then “Grind Mode” is it – they’ve come back here ferociously with added punch in the low-end, amping-up the energy even further and sounding more dedicated to their pursuit than ever before.  And if you’re like myself and you’ve been paying attention to the numbers and the math along the way – you’ll notice that the people are starting to figure these guys out too…thumbs-up are flying around the internet to support this cut, as they should be.  I love what I hear in “Grind Mode” – you can clearly hear in the tone of their voices that it is time to DO WORK, and that these guys plan to be around for a long time to come.  Respect to that…I hear every reason as to why this crew should continue, they’re incredibly talented and entirely entertaining; it’s comforting to see that these guys are starting to see that shift in support, they deserve it.  They’re in “Grind Mode” and clearly hungry to reach that next-level – and it’s that dedication to the art beyond all things that keeps the Conceptz crew one of the most worthy of your time out there in the hip-hop scene right now, without question.

Find out more about Conceptz at their official page at:  https://www.conceptzmusic.net/