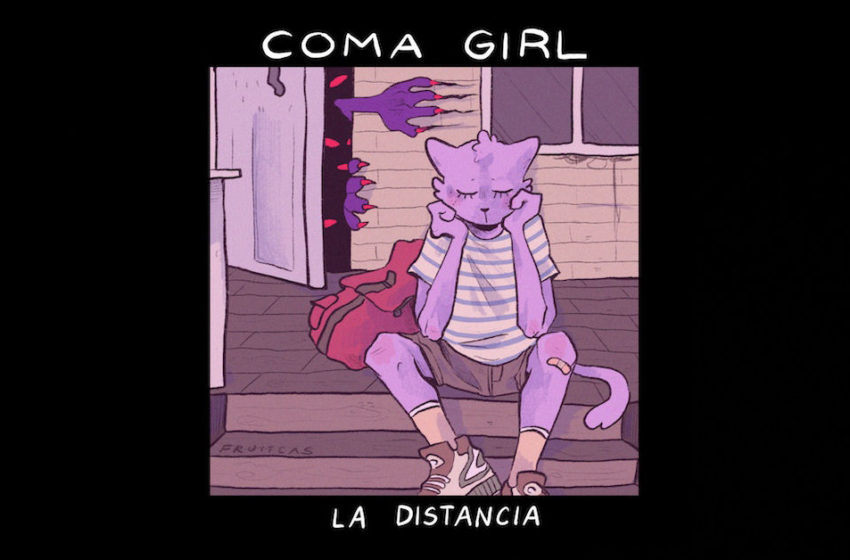 …it’d be pretty tough to have grown up in the 90s & savaging CD stores throughout the 2000s and not come out with a highly favorable opinion of Coma Girl’s single “La Distancia” – I’m all over this cut!

If I had to pick some sort of wild combination of bands that you could compare this to…let’s see…I’d go with something like…Blink 182-meets-The Virgins-meets-The Doughboys…and that’s certainly all good with me.  I think the Blink comparison is likely to be the one that most people out there will pick up on, though I gotta say, it’s not overly leaned on either…you’ll pick it up, but it’s not actually the dominating trait of “La Distancia” – more like it’s a similar energy in the vibe is all.  The Virgins…well…ahem…*cough *cough *pause for the applause for such a relatively unknown but unbelievably cool indie reference* – I think you’ll find that comparison is apt for the slickness in the hooks & sound you’ll hear.  As for The Doughboys…I’ll admit, that’s a pretty Canadian reference and still a fairly obscure one…BUT…where I come from back in Vancouver, BC…Portland, Oregon where Coma Girl is based was only a short drive away…so maybe, just maybe, Coma Girl was lucky enough to get a dose or two of records like Crush and Turn Me On from back in the day.  Probably not, despite the close proximity to Canada…The Doughboys were largely passed over by all, and that’ll always go down as one of the biggest tragedies of the Canadian 90s scene…they wrote albums that were full of wicked energy and wild Pop-inclinations, much like this cut from Coma Girl.  Anyhow.  I suppose the ultimate point is that no one aspect of any of these comparisons would quite cover it all – what Quin Saunders is rockin’ on “La Distancia” contains multiple dimensions in a short sonic burst of relentless dynamics that connect like a surge of electricity from your speakers to your brain-stem.  Sounds good right?  I know.  If I read that somewhere else I’d be like, sign me up for THIS!

Facts are facts though, Quin is great at what she does and she’s slayin’ it on “La Distancia.”  Just enough of a hint of Emo attitude, but nestled firmly within a solid Alt/Pop sound that accomplishes a hell of a lot for a song that’s all of two-minutes & eleven-seconds in length.  I mean…I’ll just say it outright…there really aren’t that many songs around this timeframe that feel like they’re fully complete and not just an intro tune or filler on a record…this one does.  And of course we’re talking outside of Punk/Electro…those two genres being the main exceptions to the short-song realities I just explained.  The point is, by the time you’ve reached the end of Coma Girl’s “La Distancia” your ears feel like they’ve just eaten the full meal they deserve, WITH dessert…you feel me?  What I’m tellin’ ya is to not let the short length deceive ya…you’ll be more than satisfied with just how much happens in so little time.  Again, credit to Quin – she pulls no punches and goes after this whole song with the energy, melody, and frantic power the words & music are calling out for…it’d be hard to complain about a performance like the one she’s put in here and I’m not about to be the person starting that trend anytime soon.  Obviously it’s not gonna be the happiest song you’ll hear this year when you absorb the lyrics in-full, but your ears could very well be deceived on those first couple listens with the frenetic spark of live-wire energy you’ll find runs throughout “La Distancia.”  As wild as it can be, the instrumentation is bang-on, the vocals are right on the money as well – and more importantly than perhaps anything else, you can hear the professionalism even in the midst of such a storm of swirling emotions.  That might very well be the most alluring aspect of the entire song here…the fact that Quin is so clearly in control while she sings about basically falling apart completely and ripping it up musically.  ”La Distancia” is a seriously tight track that has trimmed every ounce of fat off it, to ensure you’re bound to dig into this cut from the moment it starts to the moment it ends.  The songwriting is impressive, the execution is essentially flawless, and the results are mad entertaining…like I said, you won’t find me complaining about what I’ve heard here from Coma Girl on “La Distancia” – this hits the mark & delivers on single-worthy sound.

Find out more about Coma Girl at the official page at Instagram here:  https://www.instagram.com/notcomagirl