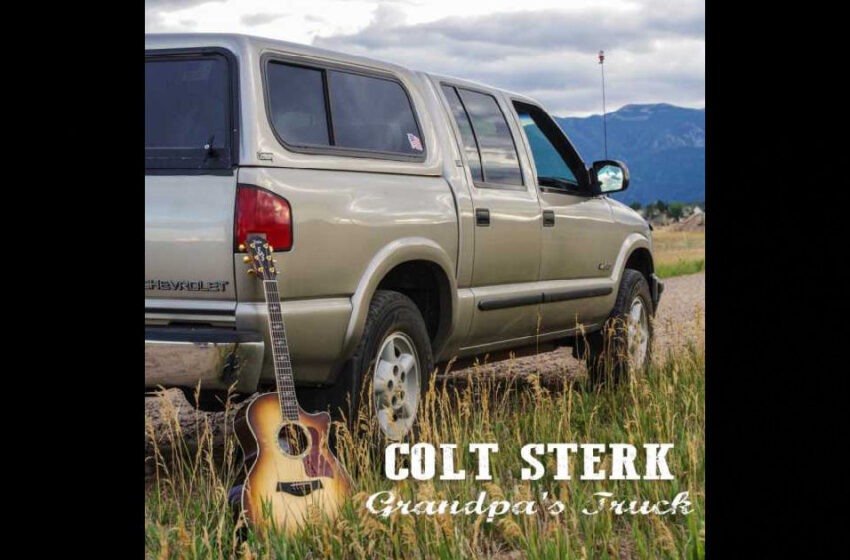 Colt.  Sterk.  If that doesn’t sound like both the quintessential American hero AND a potential Country star all rolled into one, what else could?  As it turns out – at the moment, both are equally true parts of his tale as well – he is CURRENTLY serving in the army as a Blackhawk pilot, which is righteously cool & deserves an official shout-out of respect & thanks for his service – and in addition to that, somewhere in the time he doesn’t spend flying around, he’s got a few spare minutes to be a singer/songwriter in the ol’ Country genre.  As it turns out, the response to that has been earning him plenty of accolades; his debut single “Grandpa’s Truck” has been crushin’ streams online & creatin’ dreams over there in Sterk’s world…it’s fully apparent that the people out there are listening, and they’re digging what they hear too.

While I might go a different route in the case I’ll make for supporting Colt – make no mistake, that’s what this will be…support.  At the end of the day, I can hear the guy’s got a gift for songwriting & I 100% believe you can tell he’s a passionate artist with a genuine interest in the world outside of his Blackhawk as well; you’ll hear the sincerity in his singing and he’s got charm that makes you wanna root for the guy.  And if I’m being completely honest with ya, he’s written himself a really great Country song here with “Grandpa’s Truck” that has all the essential ingredients to please any fan of the genre right there in the design.  I even had my moments too…where I’d hear for just a second, somewhere say like, around the 1:45 mark…and I’d think to myself…yep…he does in fact sound like he’s got a place in this genre for sure.

At the risk of being incredibly unpopular, but as real as I always am with ya…that was the sticking point – it wasn’t every moment that I felt like this man…this guy named COLT STERK…fully belonged to the Country genre when I was listening to “Grandpa’s Truck.”  Calm.  Down.  This isn’t an insult – this is just me being honest – he’s got talents that are far better suited to the strengths of other styles of music.  Truthfully, it could likely be anything from Pop to Soul to R&B, maybe even a little Rock here & there, but not the main diet…Colt’s actually got quite a gentle demeanor when it comes to his vocals that would likely shock most people given how freakin’ BOLD his name alone sounds when you say it out loud.  Y’all can love me or hate me for the things I say here…I just try to do right by the artists & bands I listen to – and when it comes to the case of Sterk here, I’d be looking long & hard at what the real strengths are in a song like “Grandpa’s Truck” and where that could potentially lead him.  Because what I’m not saying is that he doesn’t belong making music…and I’m not saying he couldn’t verifiably be a star by many definitions as well…all I’m saying is he could choose to battle it out hard in Country music-scene, or find a new path in a different style that’ll lead him to a quicker victory in establishing his name out there, and quite likely the longevity he’s seeking in a career outside of the army one day.

That’s kinda up to him all-around really…these are the choices we all make as artists and in the bands we join throughout our careers…it’s the whole ‘what do you want to be when you grow up’ all over again, just a different point in time…but never before has this happened to a dude named Colt Sterk.  I hear a really well-written song, I hear tight execution – heck, I even hear a performance from Sterk himself that he should be nothing less than proud of on “Grandpa’s Truck” – y’all getting me here?  I’ve got nothing bad to say about this song – I’m simply saying, he’s got a brighter future outside of Country.  You can believe that, or not; I’m never here to steer anyone’s path or say I’d know anything any better than they would themselves – and sometimes it doesn’t even matter anyway!  If Colt Sterk wants to write Colt Sterk Country tunes for the rest of Colt Sterk’s life – I am not gonna be the guy to tell him no – live your best life my friend, and have at’er hoss, as they say.  Would I have known “Grandpa’s Truck” was a Country tune simply by listening?  Yes.  But I ain’t gonna lie to ya, being familiar with the way that genre does its thing & those tunes are written tends to reveal a whole bunch of tricks of the trade that would clue me in…if I was judging by sound alone, I might actually make an argument for it being something closer to the Pop/Rock realm.  Somewhere in those bands akin to like, Toad The Wet Sprocket, Hootie And The Blowfish, or Better Than Ezra even a little bit…to me, that’s where Colt’s voice would really stand out & shine…and it might even give him a crack at standing out as much as his writing does.  As it stands…when it comes to “Grandpa’s Truck,” it really is just that much harder to say whether or not this will connect with its rowdy fan-base of fun lovin’ workin’ folks; it’s that grit & rawness so typically associated with the sound of the genre that Sterk seems to trade for a much smoother & gentle approach – doesn’t make it a bad song in the slightest – it just has me hearing the potential for where he could go from here.  I know what I’d do…I’d ditch the labels altogether and let the people sort it out for themselves when they listen, as opposed to potentially pigeonholing where listeners like me will try to assume they know where artists like Colt do or don’t fit in this world.  But I’d do away with the Country tag first…and then I’d probably break up the singer and songwriter part of the label as well – because those are two things that Sterk does extremely well, but now he’s gotta find a way to make’em both ride together in tandem.  Songwriting he’s got locked down if this is the quality of tune, level of detail, and precision he’s got for creating melody through his words – and singing, you’ll hear he’s got a great voice that is suited for multiple avenues of success…I’m not even saying Country isn’t one of them when it comes right down to it, I’m just saying there might be more work to be done to twist himself into that genre in a way the die-hard fans will embrace, as opposed to sliding right on up to the top of the Pop charts instead where he might be a more natural fit.  I don’t even know WHY I’m trying to talk a dude named Colt Sterk outta being a Country music star…of all names out there that indicate a career path…

Anyhow.  Y’all know I just call it like I hear it, take it or leave it.  I like what I’m hearing from Colt…I really don’t want any of you to get it twisted – and I’ll prove it – while I’d acknowledge the Hootie dude is one seriously incredible singer, it’s actually the other two bands I’ve mentioned that have some of my own favorite singers at the front of mic – so don’t get me wrong, I’m clearly in Colt’s corner if I’m willing to compare him to some of my own favorites out there.  Like I said from the very get-go – I’m supporting this guy, whether or not he wants to grind it out in the Country realm or not; I think he’s got a wide open future with many avenues and paths towards his success, be it singing, be it songwriting, be it both – or be it even in his Blackhawk out there cruisin’ around & keeping us all safe & sound.  Something about Colt’s endearing & inviting vocals really do pull you right onboard to cheer for the guy…and chances are, given enough time & opportunity…that’ll lead him down the right path no matter which he chooses.  Seems like a great guy with good intentions, and he’s got a fully enjoyable track with “Grandpa’s Truck” that I can’t imagine anyone will complain about – I’m not either; but I am saying keep an eye & an ear out for where Colt goes from here.  You’ll likely find this guy’s gonna surprise you over the future to come & either completely switch it up, or refine himself into an all-out Country superstar.

Find out more about Colt Sterk at his official page at Facebook here:  https://www.facebook.com/coltsterkmusic