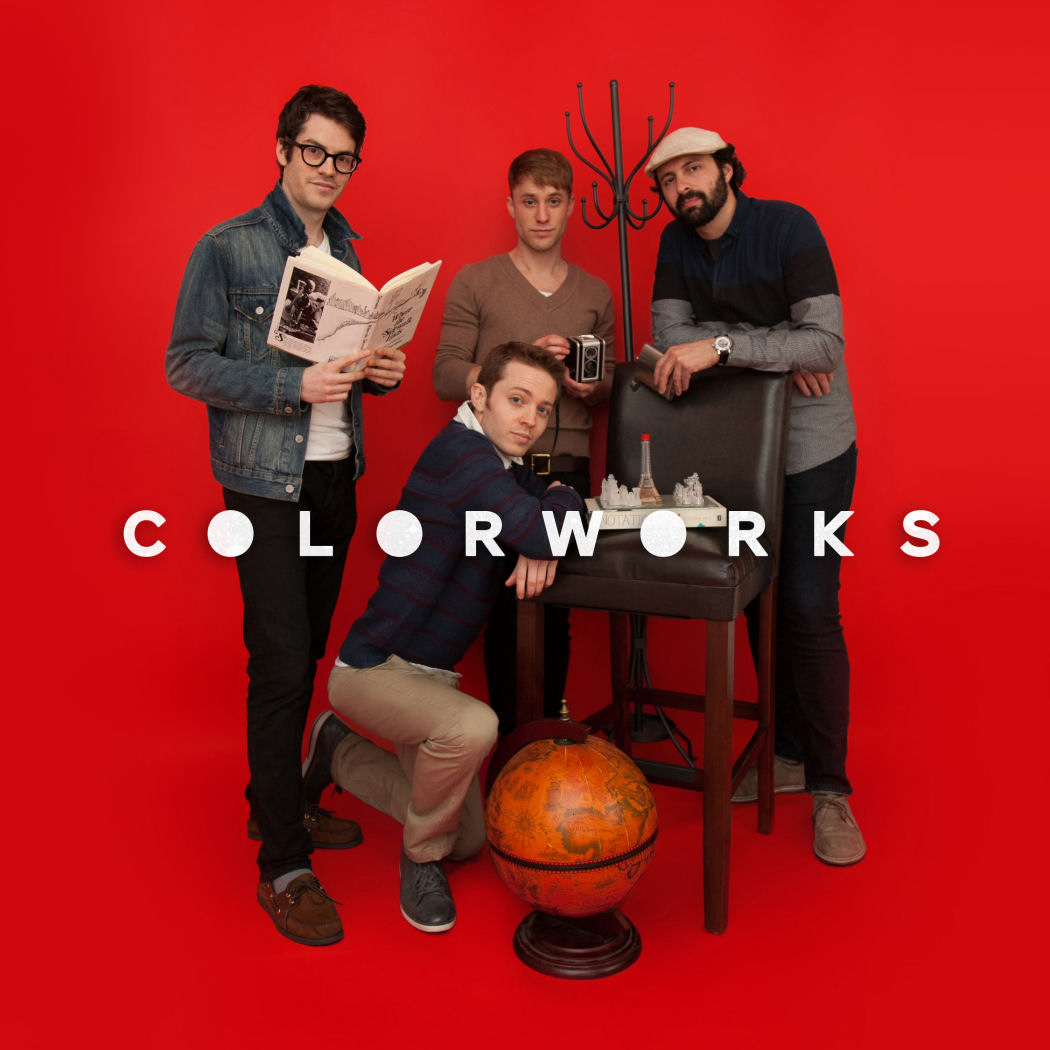 Is it just me or is our homepage looking more colorful than normal? Not only is it full of US-spellings…but Color(insert here) seems to be a thing right now…no one told me in advance this was a thing…but it definitely seems like it’s a thing, doesn’t it? I suppose it has to be slightly coincidental at the least considering that when we reviewed Colorstarr yesterday they came all the way from Australia and made electro pop – today we’ve got Colorworks with their own brand of psychedelic-pop/rock. So…while they might borrow from the same spectrum of ‘colors’ – I’m thinking the rest is just purely coincidence.

Wouldn’t that be funny though? I mean…we all went through that one-year of schooling where like, ‘Matt’ or ‘Dave’ or ‘Fred’ all of a sudden popped-up by the dozens right? Okay…not you ‘Fred’ – but you get what I mean…and how bizarre would it be to see Colorstarr and Colorworks joined over the next two months by bands like Colorpumpkins, Coloryeezy or Colorhead? I mean…based on my past twenty-four hours…it’s a lot more of a possibility than you might think!

What’s unclear is why they didn’t send over the kick-ass album cover you see on Soundcloud that puts the Colorworks logo underneath a solid crop of Mary-Jane leaves…but some mysteries in life we’ll never solve I suppose…but you’d think they’d take the chance on sending that one to us over here in BC, Canada, just outside the city of ‘Vansterdam.’ Especially since Colorworks is from SEATTLE – so c’mon boys…don’t tell me you haven’t been to our backyard before…you know what we’re like by now…

As “Joyla Red” begins with its title-track…you get a real blend of timelines & sound from the beginning of your experience with Colorworks. Much of the initial atmosphere feels like they’ve sent you right back to the sixties or early-seventies…and even though they’ve put themselves into the psychedelia-genres, inarguably there’s much more to the band and their sound. “Joyla Red” borrows just as much from bands like Strawberry Alarm Clock or The Monkees as it might from the psych-genres. Bret Dylan on the guitar & vocals might sound a little bizarre at first with his low-end vocals overtop of the bright-guitar tones…but I think it honestly just needs a minute or two to attune yourself to the style & approach of Colorworks. Once you’ve got that down, it all seems to start to snap right into place…you begin to hear how this does work after all; Dylan might not be going out to compete with virtuosos like Pavarotti anytime soon…but of course that’s not what the music of Colorworks is calling for.

For their own imaginative, time-warping-tunes – Dylan sings’em just fine if you ask me; I’d be comfortable with citing others like Todd Rundgren, The Beatles and certainly the influence of Ben Folds once you start into “Paris, You Take Care.” Andrew Ginn remains impressive, standing out for his excellent, tight drumming-techniques…the crisp-snap of “Paris, You Take Care” really fuels this second track. You’ll notice all kinds of extra-things in this second tune as you get woven further into the fabric of these four combined psychedelic-minds…overall “Paris, You Take Care” definitely has that Sgt. Pepper’s vibe & attitude to it. If you were to look at this song on paper…it would more than likely look all kinds of crazy…the way it winds through bright-pop melody with stuttered start/stop beats and a real living, organic-pulse to the song…combined with like…chorus-style vocals that are nearly theatrical, hand claps and dramatic changes to the music as it plays. Truly lots going on for pop-anything, know what I mean? So if you had planned on turning off the ol’ brainwaves…not so fast my friends…the transitions from piece to piece & part to part will keep your attention on Colorworks as they flow through “Paris, You Take Care.” And if I may…I’d just like to say I absolutely LOVE the title of this song for some bizarre reason…it might just be that it matches the music extremely well, but I also think it also highlights the ‘fun’ part of the attitude in Colorworks that keeps them from taking life too seriously.

There is a complete possibility that our new friends from Seattle might escape comparisons to The Monkees on “Just Mine” – I could totally see that happening with the majority of independent music-reviews out there. Those young-bucks I tellz ya…they just don’t know their roots! Anyone with a little grey in their beard like me will tell you that “Just Mine” drifts dangerously close to the ‘been there & done that’ category…but to be fair, what makes this song work for Colorworks is the fact that they commit to it. Loving the bass from Nick Myette and in all-truth, I actually like “Just Mine” quite a bit – but I can definitely recognize the influence here from everything in the music to the lyrics to the point where it does cross that line slightly I think. That line that says we can borrow from influence, but not become it; I think that Colorworks, still being somewhat new are still finding ‘their’ sound, ‘their’ style and where ‘they’ truly fit. As far as the band themselves go – I feel like “Just Mine” might be one of the more well-executed and accessible songs on this EP, but I also feel like this is the one that has the least connection to ‘them’ and whatever style they’d want to claim as their own officially. This one seems a little less personalized…a lot more dedicated to a certain time/style of music…rhythmic, but somewhat disconnected from the heartbeat of the actual band.

Why the … this time you ask? Hey! We’re going at MY pace here! I wasn’t gonna disrespect the band by fast-forwarding their tune even if it’s the ninth or tenth time I’ve heard it! So yeah – sometimes you gotta wait it out with me while I wait for the next song to come on…which is really all this paragraph is for/about. Not much we can do about it now; I’ve already written it – you just read it.

“Feelings Lie” puts the best of Colorworks on a highlight-display of melody and rhythm in the late-stages of the Joyla Red EP. Easily the strongest chorus they’ve put into the five songs…”Feelings Lie” is incredibly smooth and accessible to many sets of ears out there – and in contrast to “Just Mine” – this song feels much more ‘their own.’ If you were to ask this guy right here…this is the avenue/path to explore – Colorworks is killing it here on “Feelings Lie” with an outstandingly-focused melody that delivers from every angle. Not sure if it’s Dylan, or if it’s David Easton responsible for the guitar-solo at the end of the song…but whichever of their two main guitarists it is deserves a high-five…loved the way they chose to finish the song off like this. There’s no doubt about the fact that they’re certainly supplying large-doses of the sounds and textures that make you fall quickly in love with this groove – but really…when you think about it…how many songs out there end whilst someone’s in the middle of riffing it up on a solo? For what it’s worth…they’re incorporating a unique idea there…it might seem like a very small change, but it’s mightily-effective; and they’re certainly not giving the guy the hook or playing the Oscar-music during an extended-speech here…it’s just a clever way to end a brilliantly-tight song. Ain’t nothing wrong with that!

“Memory Boy” ends the Joyla Red EP experience on solid-ground. This final track hits on lots of key moods and atmospheres you’ll find in bands like The Dandy Warhols, Weezer…maybe even The LA’s or even Built To Spill somewhat…it’s hazy-pop. Incorporating a completely subtle-psychedelic vibe into the shiny-rhythms of “Memory Boy” through the layered & textured-vocals…Colorworks has done well to really take an entire idea for their sound/style, focus in on it, and really write music in pursuit of a verifiable sound they can call their own. I think this final tune really flexes that muscle and strength of the band once more before it ends Joyla Red…”Memory Boy” finds another way of blending and borrowing the influences that paved the road before them without losing themselves to it. For the most part – I think that Colorworks has done an amazing job of bringing the old into the new and making this combination of atmospheres feel updated but not forced, inorganic or fake…and while we all might be guilty of borrowing a little too much from the music that made us want to pick up our instruments in the first place…they don’t go so far as to lose their identity in pursuit of their ideas. That’s tougher to do than you might think; Colorworks has pulled it off decidedly-well on the Joyla Red EP and I can only imagine that this band will continually find new & exciting ways to blend-up ideas, sounds, moods and music that serve to even further define their own signature-style as they press on. Considering the great start Colorworks has on this new record…that’s a damn exciting thing to look forward to!

Find out more about Colorworks at their official page at: http://colorworksband.com/