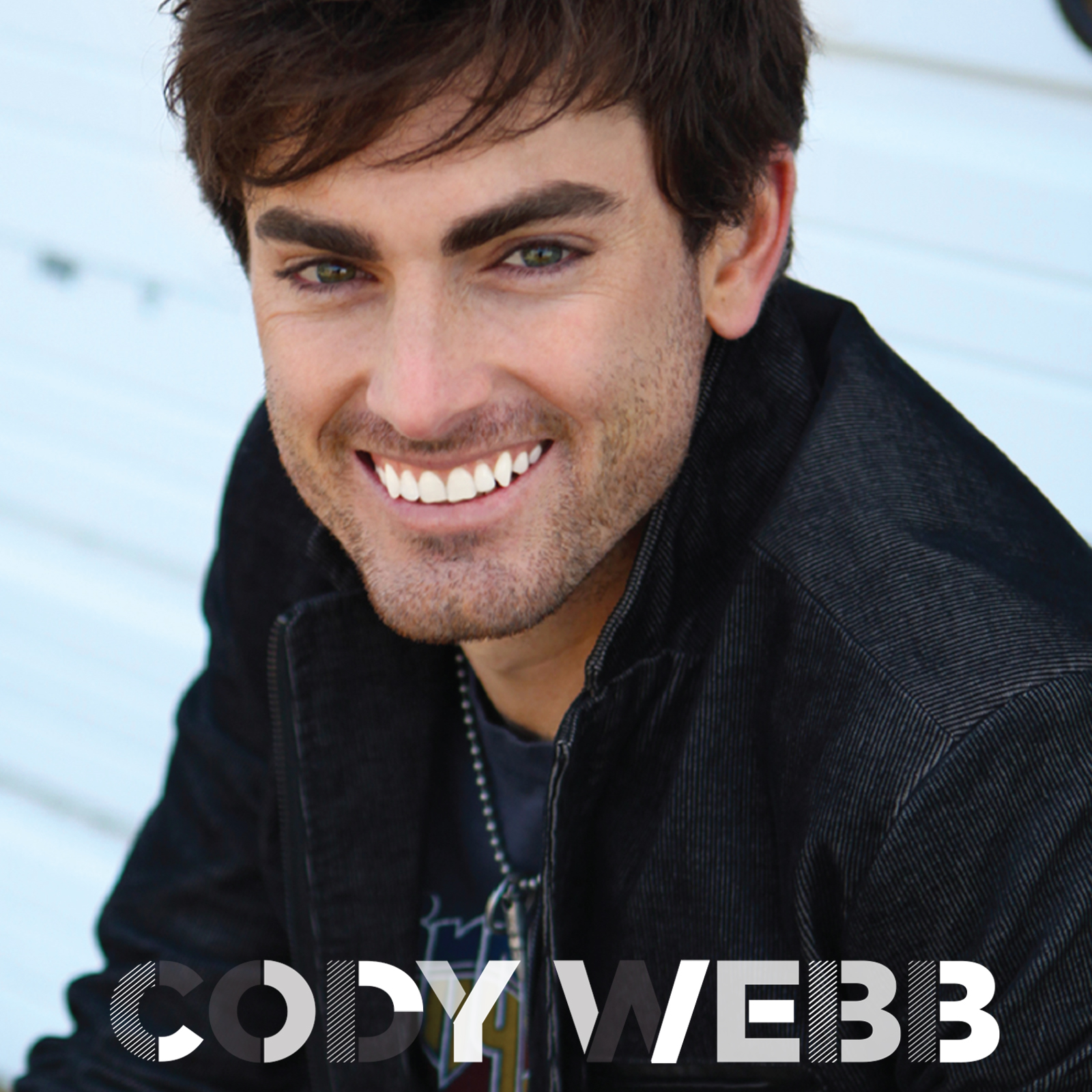 If I wanted to…I could allow myself to admit that what I’m listening to would be classified as Country-music…I could.  Of course…it’s modern-day Country-music – so advantage to Jer @ SBS, I can always pretend I’m listening to Pop-music…which I’m slightly more comfortable with admitting to myself generally speaking.  I dig a lot of what Cody Webb is doing here…and truthfully, if I WAS to admit anything about modern-day Country-music, it would be that it certainly suits my personal addiction to sweet melody in almost every case these days.  Webb is no exception – he’s written big songs with giant hooks on his self-titled debut EP – and true to the current state of the genre today, every one of these tunes has a myriad of elements that support widespread accessibility and crossover appeal.

Inviting…comforting in sound, delivery and style…and honestly, almost familiar on the opening song “More Than A Little” – Webb begins the record with bright sweetness for your ears to hear.  Nothing more frustrating for a music-reviewer than not being able to draw to the comparison we’re after – I can’t for the life of me seem to remember which song this reminds me so clearly of…I can hear it in my head and it’s close to what Cody’s doing here, which really does give me that feeling of musical déjà vu.  For some reason in my head I feel like it’s something from Faith Hill…but I could be totally off-base with that…it’s been years upon years since I’ve heard her music so I could be completely out to lunch on this theory.  In any event…the production is solid, Webb sings with rhythm and great tone…the writing feels like it has the slick Nashville-stamp on it, but again, that could just be what I’m hearing personally.  “More Than A Little” makes for what feels like a sweet blend of Americana-Pop and has great warmth & energy to begin the experience with Webb’s music.

If Cody hasn’t been to Nashville yet somehow, he’s certainly heading in that direction.  Again – I’d presume from what I’m hearing that he’s already been there and worked on these songs – but that’s all theory from what I’m getting out of the writing.  He’s either been a pupil of study in the environment directly, or he’s certainly learned a lot from the artists & bands he’s influence by – and in either event, he certainly comes out sounding confident and like the ‘real deal’ you hope to find in this genre.  “She Ain’t Right” sticks much closer to the big-rhythm and anthem-style stadium songs of Country’s present – and in typical Country fashion, builds its lyrics around the title.  I’m positive that’s Country-music defined; I think every other genre, titles come last…in Country-music it’s my theory you start with a catchy idea in the title and go from there.  Excellent drum sounds and cymbal crashes on “She Ain’t Right” and I loved the sound of the sliding-guitar winding through the largeness of the overall rhythm.  Webb does really well to pick up the energy in the chorus and really make the most of the moment, and I dig that…lots of highlight-moments for him vocally on “She Ain’t Right.”

Don’t get me wrong…I feel like Nashville-esque writing can always be identified in its sound – but that also comes largely from the crossover potential that exists in the writing that comes out.  Listen to a song like “My My My Girl” and realize that this kind of writing could just as easily work for an alternative band like the All-American Rejects or a pop-star like Katy Perry – so you see what I mean…or hear it at least?  There’s a real future for songwriters like Webb that have the ability to write songs that have this much depth to their hooks and real pull in the melody.  I actually enjoyed “My My My Girl” quite a bit…the opening beat & guitar combination would almost pass for indie-rock were it not for Webb’s southern-style drawl.  As the song progresses, it leans more towards a rhythmic and magical pop sound that makes for sweet ear-candy.  Webb keeps the source material and emotions close to the heart of the genre as he reflects on love and life…there’s excellent heartfelt melody that comes out in this tune.  Solid bridge and breakdown just past two-minutes in, great build back into the chorus and professional delivery from Webb.  Almost too professional!  Gotta watch them Nashville types…because as cool as it can be to write with as much potential and crossover appeal – you also run the risk of writing yourself into the sea of sameness.  Webb’s great, the record sounds awesome, the songs are well-written and performed…but has he done enough to separate himself from the rest of what’s going on out there?

I’ll admit to fully looking him up right after I wrote that last paragraph…figured that I’d included enough Nashville references that if he didn’t come from there I should clarify.  As it turns out, he’s originally from Ridge Spring, SC – but guess who happened to make the move to Nashville?  Or at the very least…his social media page is tagged to that musical-mecca…so I’m assuming that’s where this EP is coming from.  Never doubt your instincts – they’ll never lead you astray…and when you think you can hear Nashville’s involvement, it’s safe to say it genuinely had a hand in whatever you’re listening to – just sayin.’

There’s stuff here to dig into and listen to though – and I respect that.  Great ideas open up the recording of “Love Me Like I’m Gone” – that’s a fantastic beginning with an excellent approach; it all snapped together perfectly in the production and sounds great to listen to.  Once again finding a way to bust through the ceiling and bring up the energy right to the rafters, “Love Me Like I’m Gone” has a real highlight chorus from Cody.  Every move he seems to make sounds like he has the bold confidence of a real veteran of the Country-music scene – and I really appreciate the sound of that.  He SHOULD sound confident – each of these songs up to and including “Love Me Like I’m Gone” has so far possessed every element of a giant hit-song just waiting to find its mainstream audience.  There is no doubt in my mind that Cody Webb has a future of success in the genre should he continue in the direction he’s already set himself on.

Still feelin’ like he’s building around that title-concept when I hear a song like “Nothin’ On You” – which for the record, also still ended up being a real highlight on this EP for me.  One of the sweetest songs he’s written and really pouring on the extra strength to the emotion in his tone – Cody’s created quite a beautiful song with “Nothin’ On You” and I can’t deny that.  As far as the EP’s flow goes, I think he’s also laid it out perfectly with this tender moment also allowing for an expanded dynamic and energy to end the record with a memorable impact…”Nothin’ On You” still leaves the record enough room to raise the roof once more.

Again…I get that it’s modern-day Country-music…and I get that Cody Webb is certainly a part of that genre and new wave of superstars upcoming in the genre…but c’mon – the final song “Better At Night” is pure pop confection isn’t it?  Regardless of where you might fit this into your collection – Cody’s created a powerful finale here with “Better At Night” fueled by clever guitar-hooks and excellent backup harmonies.  It’s another big-big song by the time it fully expands into the chorus, dripping with all the sweetness and catchiness you can possibly pack into the writing, music and overall sound.

I’m just a man with a set of ears attached to his face…I can pretend all I want to that I don’t have a single Country-music bone in my body – but it’s artists like Cody Webb that prove the opposite.  Whether or not he’s done enough to stand-out from the rest, I’m not so sure – but I do know he’ll fit right in to the heart of the genre.  I love the amount of melody and heart he’s put into his material…I appreciate the professional approach and just how ‘together’ each of these ideas and songs are – he’s ready to go…Cody is what modern-day Country-music is truly all about and celebrates proudly with stomping feet & wild cheers.

Find out more about this future star of the Country-music genre at Cody Webb’s official page:  http://codywebbcountry.com/