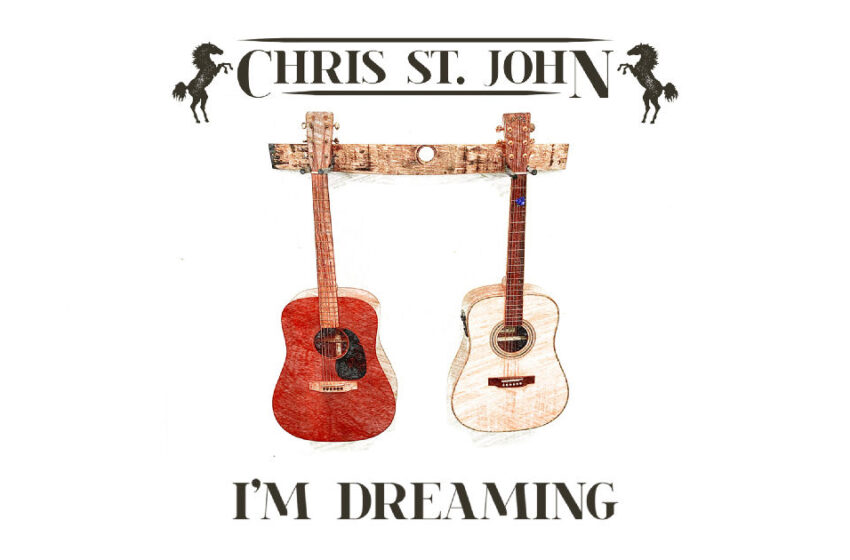 Ultimately there’d be little if nothing to complain about here when examining a single like “I Called You Rose” from Chris St. John’s new album I’m Dreaming – on a technical-level & proficiency-wise, the man does what he does very well, and possesses a real classic approach to stellar songwriting.  All-in-all, even on a single spin through “I Called You Rose,” I pretty much can’t imagine anyone out there coming to the conclusion of anything otherwise – whether it is or it isn’t your jam aside, when it comes to the fundamentals, Chris has got all the attention to detail you want to hear, with everything covered & locked-down tight between the music & the microphone.  Lyrically, he might even find his biggest highlights in this coming-of-age tale of life & love…though that’s honestly a little hard to say – overall, it’d be hard to cite any one particular thing about a song like this that stands out any more than another element or contribution to it would…when it comes right down to it, it’s a very well-balanced tune.

So then!  Green lights ahead, yes?  Perhaps!

Look…two things can be true here, and are.  One being that Chris has an undeniably great song, and the other being that he’d still likely be in for an uphill battle in getting such a subtle single out there into the world – that’s the nature of delicate & mellow vibes when it comes to swimming in the ol’ mainstream with the masses, doesn’t matter who ya are or what band you’re in.  Don’t get me wrong – I like what I’m hearing, and I’ve got a massive soft spot for sweet & endearing melodies like this with contrasting emotions like you’ll find throughout “I Called You Rose” – but I am realistic as well.  When it comes to the scene out there right now, you can always look at what’s current & being listened to as a guide of sorts to use as a measurement of where something fits in…and of course, “I Called You Rose” goes defiantly against the grain by the subtlest of means in that respect in this particular moment in time.  Having said that, I’m also even more of a believer in the power of the internet and how it’s basically made so much of that former measurement almost entirely irrelevant – just because something ends up on the radio these days doesn’t mean it even has half the audience a song can find online – and the sheer access we have means that none of us listeners have to be force-fed anything at all – we have the power to choose & seek out what we wanna listen to.  So while it may appear that a single like “I Called You Rose” might have to battle harder than some in order to get the attention it’ll deserve – in my opinion, that’s no reason to be discouraged at all; eventually, songs like this find the audience they truly deserve, it just probably takes a little longer than a catchy Pop tune or the beat of an Electro-based cut these days.

I suppose that’s a roundabout way of saying it’s not too likely that a track like “I Called You Rose” is gonna go out there & set the world on fire, but it will receive a warm reception & listeners out there will always be able to rely on this song to deliver that dose of audible sweetness & sincerity they want & reach for at a specific time, you dig?  Plus, for those out there that really like to hear a story behind the music, artists, and bands they’re listening to…I mean, you pretty much can’t beat the one you’ll find here, truly.  According to the ol’ world of social-media, you’ll find that the album I’m Dreaming is the culmination of 30 years of writing, with themes including:  “the loss of love at a young age; the loss of his parents; the birth of his son John (now 17) and life with his wife of 27 years Elisabeth; a surprise DNA discovery; a serious illness where he was put in a medically induced coma, and a nurse sang him back to life; the loss of a young relative in a car accident and the subsequent climb out of depression; alcohol addiction and recovery; and a gift from his grandmother that he intends to return to her someday.”  Like, I read something like that & I’m pretty much astounded really…what a life Chris has experienced so far!

And for what it’s worth, he’s already been proving that “I Called You Rose” has had no problems at all really finding that audience it deserves – you can visibly see online that Chris has been getting a ton of attention & accolades for his efforts here from critics & fans alike, and rightly so – it’s a really well-written and perfectly performed tune & there’s no disputing that.  He’s an artist that’s clearly got a ton of heart and a willingness to share that through his music & the stories in his songs, and that personal connection to what he creates is something that we can genuinely feel when we listen to his play & sing.  As a huge fan of slower, gentler melodies personally, I have no issues whatsoever saying that I support & like what I’m hearing here…I recognize that it might not be a song for every moment or have that energy to fuel an amped-up Friday night, but there are certainly specific times where I know I’d wanna reach for a single with sweetness like this & take a tender moment to reflect on nostalgia with Chris on “I Called You Rose.”  Dude’s a genuinely gifted guitar player too when you’re listening to that aspect up close too – though again, I think it’s really tough to cite any one element as any better than the others you’ll find here on this single…the piano, the backing vocals, the lead, the melody, the songwriting – I mean, it’s got an array of fantastically focused & endearing musicianship all-around that stacks up strong & bold, even in this delicate setting.  It’s got moments of spectacular beauty, it’s got heartbreaking twists in the storyline as well…and Chris himself, who has a humble, grounded, and down-to-earth natural sweetness in the sound of his voice & the wisdom in his words, has done a stellar job from the concept on up here.  He’s also got an excellent live version of his single out there too – check out “I Called You Rose” below!

After doing so many incredible things throughout his lifetime (for real y’all – read this guy’s bio!) and finally getting that moment of his own to shine in the spotlight at long last – it’s genuinely inspiring to see Chris venture into a verifiable new career or second-life as a solo-artist now.  As he’s put it himself, when it comes to his new album I’m Dreaming:  “People have told me I should write a book or make an album.  This is both to me.”

And may this new record of yours, be only the first exciting new chapter of your own story my friend.

Find out more about Chris St. John at his official homepage at:  https://chrisstjohnmusic.com