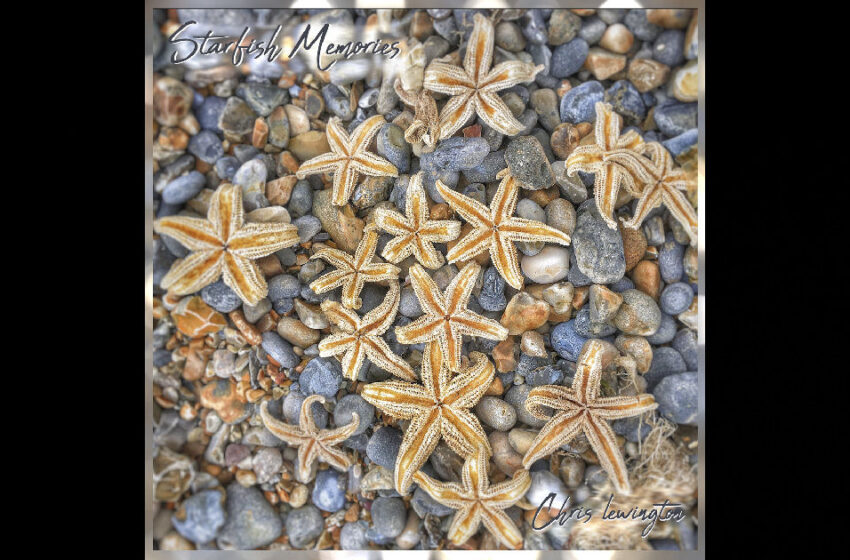 If I’m being real with ya though, if that description was to be for this specific song, we’re probably cut out The Beatles and Bon Iver this time around…you might hear the First Aid Kit reference slightly, and more than likely, you’ll recognize the Jefferson Airplane influence if you’re familiar with the band, as you should be of course.  Other than that, dude’s probably got more in common with artistic archetypes like Nick Cave than he does with The Beatles on a single like “The Bridge At Midnight” – Chris Lewington has one of those larger-than-life personalities that emanates boldly from his music with a profound level of confidence you’ll rarely find in what’s actually more of a niche sound in the modern era we’re living in.  If you take a tour through the rest of his latest EP called Starfish Memories, you’ll find sonic cues in the mix that hint at those other influences listed within that quote up top, and you’ll also notice in the write-up that comes along with it, that Lewington’s new release is an appetizer for a full-album soon to follow.

And so here I am, with a bite-sized morsel of the appetizer before the main course, reviewing “The Bridge At Midnight,” which admittedly, is at the very least, a hearty cut that does in fact eat like a meal.

We could look at this from a couple ways.  Ultimately, even in the day & age of the internet, putting out a nearly six-minute tune as a single comes along with more risk than we tend to acknowledge…and to be fair, I don’t know that there’s quite enough variation in that first ninety seconds or so for the average everyday listener to stick around for the rest, but hopefully they do.  Think of it this way – Chris is competing with tracks out there in the world that are practically wrapping up in that same amount of time, already having given ya a taste of the verse, chorus, a mini-solo or breakdown, and finale…and here we’ve got Lewington, admittedly rooted in the old-school/psychedelic sound via the ol’ Jefferson Airplane influence & all, having the gall & resilience it takes to say that music can reach out to ya in a multitude of different methods.  And perhaps it can…perhaps it will…perhaps it’s just me & me alone that would think a song like “The Bridge At Midnight” would struggle more as a single than shorter tunes would in the court of public opinion.  What else can I say, other than I truly enjoy being proven wrong – so by all means y’all, light this track up on the internet and do exactly that if you’re feeling so inclined.

In terms of quality, there’s really a whole bunch you can complain about here, and I’m not the guy that’s gonna just invent stuff outta thin air for the sake of filling space.  Musically, there’s a whole lot of great stuff going on…particularly, in my opinion, from the keyboards, which are outright essential to this song.  Personally, I’d also say that one of Chris’ main strengths as an artist would be his lyricism…that’s practically award-worthy stuff when it comes right down to it.  Chances are it’ll take you a spin or two in order to absorb every word, and even then, you’ll only catch them all if you’re lucky – but the more you dig into what’s been created on “The Bridge At Midnight,” the more you’ll appreciate what a tale this song truly becomes.  Lewington’s vocals are actually an exceptional fit that is brilliantly well-suited for music like this…which is another huge positive for sure; I’m not here to say he’s a typical singer or artist by any means…but c’mon now y’all – we’ve already got enough of those out there in this world, don’t we?  You can feel the lyricism come alive by the way he sings it…to me, that counts for something.  “The Bridge At Midnight” becomes an experience in that regard…kind of like someone explaining a painting or some kind of art in the most engaging way you can conceive, because they’re THAT into it themselves, you dig?  The solo instrumentation found in the fourth/fifth minutes was also a HUGE highlight to be enjoyed, and assuming you’re the type of listener that does have an attention span beyond ninety-seconds, I’d imagine you’ll be stoked to hear how this song continues to get adventurous and explores its vast potential, right up to the very last seconds you’ll hear.  Ultimately, while there’s certainly risks that come along with having a song like “The Bridge At Midnight” as your single when…hmm…any of the other cuts from the Starfish Memories EP would have probably made a more logical choice (especially something like “Blue Skies, Fields Of Gold” in my opinion) – there isn’t any set of rules that anyone HAS to follow as an artist…this whole music thang is about doin’ it how YOU would do it, being fearless & bold, and damn the torpedoes.  So rock on Chris Lewington I say…the climb might not have to be as hard as it’s being made with “The Bridge At Midnight,” but there’s also always something to be said for blazing your own trail and going against the grain…that in itself will prevent ya from drowning in the sea of sameness.

Find out more about Chris Lewington from his official website:  https://www.chrislewington.co.uk