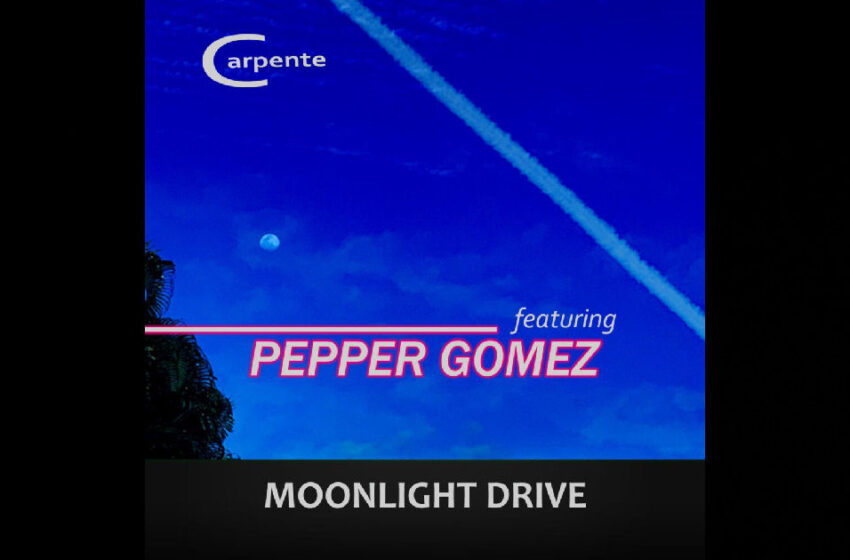 What do I always tell ya folks?  Context matters.

To listen to this collaborative single from composer/producer Carpente & singer/artist Pepper Gomez would be one thing, but to know a bit more of the full story really counts for a lot when it comes to this cut called “Moonlight Drive,” and adds more to the experience overall in my opinion.  And wouldn’t you know it, you lucky people you – that’s exactly what I’m here to do!  I’m that context-supplyin’ music-fan you know that loves to dig into all kinds of stuff & information from all over the place when I’m having a listen to something…and I might just have more of an inside scoop on this particular single than most out there will.  So buckle on up, let’s take this new track “Moonlight Drive” for a spin around the block, or a speedy cruise down the highway with the top-down if you’re not covered in snow like we are here already in Canada right now at the start of the icy crunch of winter, and see what we hear, shall we?

Collaborations are always freakin’ cool for one reason or another aren’t they?  I think it’s always fun to get right into how they started, and imagine what it would be like to have completed that first part & hear what came back when the next part of the song was completed – you follow me?  Talk about Christmas y’all…that’s the best present that the creative-types out there can ever open up, and there’s almost no way of knowing what it is you’re going to receive…but I betcha in more circumstances than not, you’ll find a whole lotta joy exists in opening something like this up.  Here we’ve got a combination of some extremely unique talents that have explored successful careers in the entertainment business for quite some time, still thriving today as the artists they are in their respective mediums.  You’ve got Carpente – aka Kenny Carpenter, who is also a filmmaker and looking MIGHTY DAPPER in his promo photo posted up at his page at Spotify…and you’ve got singer Pepper Gomez, who was not only an integral part of the Chicago House genre straight from day one, but also found her way onto the Billboard charts back in the 80s, and she continues to be a force on the frontlines of music as a promoter today, introducing us to the new generation of talent out there.  Respect!  And check out THIS fun fact will ya?  Pepper “sings by invitation” at this point in her career, “because producers keep asking her and because she loves to sing and write vocal melodies and lyrics” – you get the picture – she’s a reliable gun for hire – but a willing one, you follow me?  Feel free to test this theory, but I’d completely assume that, as long as you’re friendly enough, and you can bang out a quality tune – chances are, Pepper might just wanna work with YOU too – I suspect that she is entirely built of music from the inside out & always has been…she’s got that naturally collaborative & creative aura and way about her.

Niche tunes…songs made with a specific target or goal in mind, quite often end up with a justifiably narrower audience in some ways, but end up qualifying for other avenues in the artistic side of sound that most tunes don’t – there’s a bit of a trade off in tracks like “Moonlight Drive” in that regard.  It’s not a matter of a song like this not having a high degree of appeal – there are plenty of reasons to dig on the creative freedom & fun to be found here – but there is also a more direct and intended purpose to the creation of this cut that moves it beyond seeking out typical hooks or some kind of commercialized appeal.  Carpente & Pepper were looking to make something that would play like a mythical throwback of sort…something that might work in a setting for a movie with creatures like werewolves or vampires and such.  When you consider that…and all the wild neon ideas that floated throughout the synth-laden vibes of the 80s – I mean…doesn’t that change things for ya?  It should!  It should pretty much have you listening to “Moonlight Drive” and feeling like it’s essentially right on target.  It’s also got just the right hint of like…you know…something like you’d find opening up for Frank Zappa…that embrace of creative freedom and artistic expression that allows for a singer like Pepper to come in & do what she does best.  And so, you’ll find that this cut has a hybrid mix that floats somewhere strangely within the potential for the soundtrack to some bizarre Twin Peaks like experience, with that right twinge of psychedelic sound to make that possible.  Carpente is havin’ himself a serious MOMENT on those synth keys if you’re really listening y’all!  There’s a ton of fun to be found in the way the music here is composed and the vibrant sounds that’ll jump out at ya as it plays on.  Pepper will lose herself appropriately within the swirl of the atmosphere, and brings an undeniably free-spirited vibe to the vocals with lyrics that are based on her own unique & essentially lifelong obsession with the moon.  No kidding folks – I’ve read details in the background here that go on to reveal that, ever since she was a wee bitty kid back in the day, she’s always loved the moon and found a deep connection with it.  Some people collect hockey cards – tell me that’s any stranger!  We all like what we like, and love what we love – a song like “Moonlight Drive” is very much a reflection of that…a celebration, toast, and tribute of sorts – it’s Pepper’s way of giving back to what’s been a continual, constant, and consistent inspiration to her all throughout her time on Earth.

So…yeah…I suppose what I’m sayin’ is, it’s fair to say that a cut like this likely finds certain moods and moments in time to thrive in, more-so than it might be designed for everyday listening – but that should hardly the determining factor in what would make anything worth your time, or not.  Sometimes all we need is the right song for the right moment…or in the context of what Pepper Gomez & Carpente were going for here with “Moonlight Drive,” the right song for the right scene…a single moment, can become extremely significant in its own profound way, when it hits ya at just the right time, or serves a purpose.  I feel like these two set out to do exactly what they’ve achieved with “Moonlight Drive,” and I’ve got love for that for sure; just because something might not be found in the mainstream doesn’t make it any less worth your attention, not one bit.  In fact, I’m pretty sure that’s why I’m here doing what I do, talking up tunes you’re NOT gonna just find out there played automatically by the YouTube algorithm, because there’s a heckin’ TON of creativity in this world we’re sharing, and these two exemplify that.

Plus, they really do sound like they’re havin’ a whole bunch of fun in the process; you gotta dig that too.

Listen to more music by Pepper Gomez at her official page at Spotify:  https://open.spotify.com/artist/3yw76fAoSQa5UNu4HXdZmF

Listen to more music by Carpente at his official page at Spotify:  https://open.spotify.com/artist/47a9FnhTntGuGuUQ3JxSwB