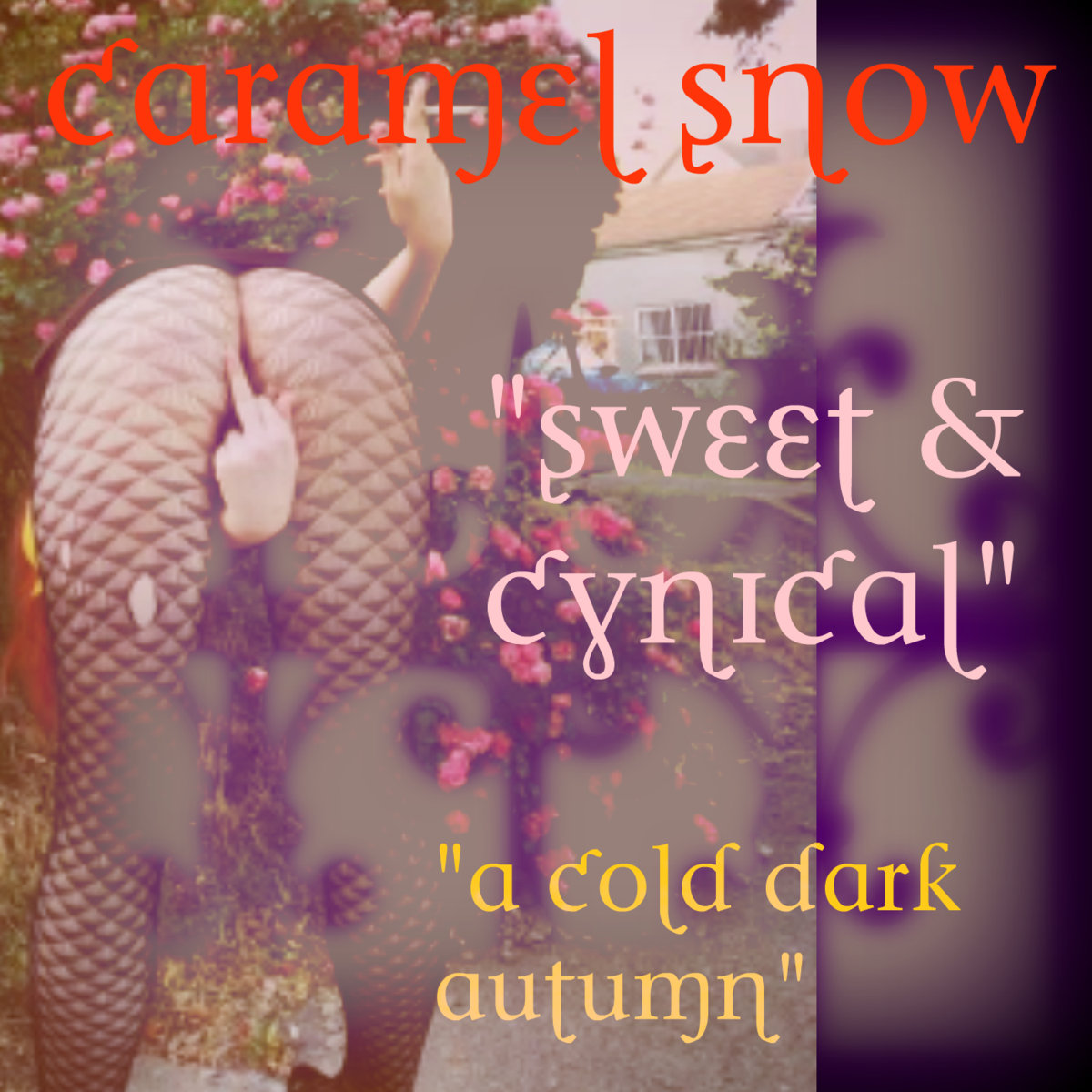 I’m not naïve!  It’s impossible to have a look at the cover of a record and not get a first impression of what the music on it might be like…and I swear if you’ve written as many of these reviews as I have, you get a really good sense of when to throw expectations out the window and just let the sound & experience come at you…because whatever it is you might think you’ll hear will probably be far off the mark when it comes to the actual reality of the situation.  Having a look at Caramel Snow’s cover for the split-single of “Sweet And Cynical”/”A Cold Dark Autumn” not only instantly brought a smile to my face – it also reminded me quickly that this was going to BE one of those times where, chances are, something strange, unique and artistic would be coming through those speakers at any moment after pushing play.  For those of you out there that don’t think the cover-art or images matter – this is exactly why they do; the anticipation and excitement about what might come from this quickly builds from the imagery we see and when used effectively…it creates wonder & curiosity…and an open-door visually into the music.

Caramel Snow didn’t let me down with the bizarre beat of “Sweet And Cynical” and quickly proved that any expectations I had for the sound beforehand would have quickly been thrown out the window as the beat & groove of this first tune established itself.  For a three-minute jam – there’s an incredible amount of stuff going on here…for those that like layers of sound going on like I do, chances are you’ll dig this even when it reaches its most sound-filled moments.  The ride to get there is built on a seriously rad rhythm-line from the guitars…the energy between that and the keyboard parts really keeps this first track providing a wickedly FUN groove to listen to.  There’s a good-mix of like, post-punk/new-wave that runs through the music…a bit of 80’s electricity in the vibe…combined with a whole shit-ton of ingenuity, ideas and instrumentation!  I LOVED the guitar solo on this cut…it’s so CRUNCHY and passionate in the sound & performance…and the way that it leads back to the bass-groove bringing the song back really had “Sweet And Cynical” evolving, building, expanding and growing in all the right ways.

As far as I can tell…everything we hear is from the mind, music and performances of one man – MVFarley.  I’d give this guy a thumbs-up personally for “Sweet And Cynical” alone, because I think that the hooks in the music aren’t typical; they’re inventive and creative but still retained tones and sounds that I genuinely believe people would respond to.  Taking that point a step further – Caramel Snow secured my opinion with the genius that follows on “A Cold Dark Autumn.”  I am personally a fan of that Bowie-esque monotone-style that has also worked for bands like The Editors, Failure, She Wants Revenge, The National and so on – I think there’s a valid place for that where it really fits in certain styles of music…monotone isn’t a bad thing if that mono-choice is a damn good tone!  When it comes to what MVFarley is doing here on these two singles, I felt like he hit the desired mark of what he was looking for in his vocals throughout both of these songs – that I feel like I can say with confidence.  I also felt though…that while you grow to accept the hooks and rhythm of the slight-melody in “Sweet And Cynical” – and you WILL; my ears also told me however…that everything in “A Cold Dark Autumn” really fit together naturally and although more downtrodden in spirit and sound, likely easier to grasp for many an ear.  “Sweet And Cynical” kind of made me more excited about where Caramel Snow will go in the future…whereas by comparison, “A Cold Dark Autumn” made me excited about where Caramel Snow is right NOW.

“A Cold Dark Autumn” was a sensory experience in itself as it began…almost like a combination of that dark & gloomy post-punk sound combined with like, Boards Of Canada for a moment…hmm…maybe I’m just describing Orbital…nah…not quite that dark…sorry…I’m thinking out loud here in written-form…

I’ll say this…I really appreciated the poetic-aspect of the lyrics in both songs…but something about “A Cold Dark Autumn” just sounds so incredibly tight as an idea and atmosphere overall that everything really just FIT into the melancholy groove that this second tune provides.  The music has an electronic but almost avant-garde jazzy-edge to it as well…the gentle nature of the music and pace is contrasted brilliantly with bright sounds from the guitar and electro-elements that find their way into the mix.  While there are tones and frequencies that might cause the hair on some necks to stand-up out there and raise some eyebrows on others – I felt like Caramel Snow delivered exceptionally well on the complete vision and ambition of chilled darkwave sound in this song.  It sounds focused…each and every move is entirely well thought-out and really clever laced into the texture of the song as it plays.  The final minute of “A Cold Dark Autumn” adds an insane amount of awesomeness into the background before it breaks into crystalline-clarity for the very last moments…like a subtle-layer of noise-rock that kicks all the ass just below the slow-moving surface of this cut.  MVFarley’s vocals also fit the mood here maybe 10% more than “Sweet And Cynical” did…and even though I think both these tunes would strongly represent his music & style and that it’s not a competition between the two songs – I think Caramel Snow started this split-single strongly and finished even stronger.