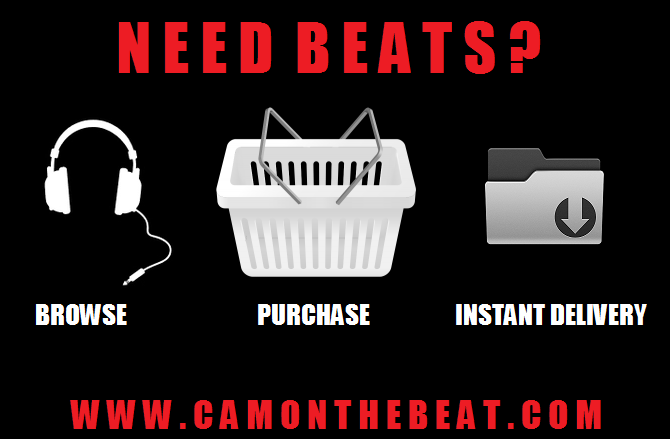 Dig this guy’s professional set-up & sound.  If you check into what Cam On The Beat is up to…well…you’ll find the name itself says it all really.  He’s one of them pro beat-makers out there…his daily grind includes making completely killer music and supplying others out there, be them vocalists or emcees, with starting blocks that will help them bust out of the gate to hit the ground running.  He’s got a whole list of cuts available for sale at his official website…again, all extremely well laid-out and ready to roll; and no…I’m not here to help run an advertisement for the guy and yes, there is still a music review coming up here – I just wanted you all to get to know him a little bit and what this guy is all about.  You could look at it as a type of musical-mercenary of sorts…but I think you’ll see/hear from the depth and range of what he’s created that he’s got a lot of love for making music in general…and that’s what’s really driving the music of Cam On The Beat.  After what I’ve personally heard off his list at his page – I’ve gotta tip my hat in respect…the man certainly knows how to create a vibrant & dynamic beat whether in fast or slo-motion…knows his production, makes versatile beats and again, has it all laid-out and easy to access what you need.  From what I can see…this artist seriously has his shit together and I can’t imagine that Cam On The Beat isn’t already experiencing success on multiple levels – he’s gotta be.

I mean…the man’s really done things right.  The first track I checked out was the chilled-out electro-vibe of “Lights” and I was immediately impressed.  Impressed by sound-choices, impressed by composition, impressed at the way the song built-up and expanded past the one-minute mark forward – I was even impressed by how he’s got his own website advertising in these songs in a prominent way without it being too invasive…so you really still get a full-shot at listening to what the song is all about and the way it transitions & flows.  Strong stuff…”Lights” was the kind of chilled cut that really has a slow groove and magical sound to its atmosphere…an instrumental that could very well thrive in multiple genres and gel with artists of all-kinds of styles.  As a huge fan of chilled-out electro myself…I almost shudder to think about where someone might take this track – I felt like “Lights” could easily stand on its own as a fan of the genre…but I also understand that space-wise, Cam On The Beat has created a massive canvas here for a potential singer or rapper.  There’s a ton of appeal in either sense; I can get easily why someone would want to listen to this just as much as I can understand why someone out there would want to put their vocals to this track.  Let’s just say “Lights” was a cut that instantly drove home what the appeal of the sound, style, production and quality you can experience from Cam On The Beat is; excellent first impression, no doubt about it.

I like the flow and sound in a track like “War Cry” where everything you hear has that slightly inebriated & hazy vibe hanging tight in the atmosphere around a solid beat like this.  Lots of versatility in the music and surrounding electro-elements that make this chill groove stay intense and captivating throughout its length and the main-melody line has an interesting sound & texture to it that really has its own strong hook & pull to it.  So there you go emcees – Cam On The Beat’s got you covered & the stage is set…only question that remains is who’s ready to step up to the mic?  From what you’ll hear in the control, tone and production on a track like “War Cry” – you know that Cam’s coming equipped and ready to hold his own throughout anything you might hear off this list…I’ve already got no doubt about that.  More importantly though…someone out there is really going to benefit from some of these smooth-vibes he’s creating…I can definitely see that there’d be people out there looking to work with this cat for the long term & not just a couple singles.  Cam’s clearly a musical asset in any situation you’ll find him in.

Definitely an asset to the trip-hop nation out there…if you’re checking out a track like “The Wave” you’ll hear it…potential for anything from hip-hop to trip-hop exists strongly here.  Again for me, a guy that spends a lot of time listening to music like Boards Of Canada – this track is ALREADY right where I’m at; but that’s kind of the point isn’t it?  You singers out there…you rappers…isn’t that what you want?  You WANT a track that is strong enough to exist on its own…something like “The Wave” where the energy in the atmosphere is already stunning and geared to captivate listeners.  I mean…I’m not saying that Cam On The Beat has made your jobs any easier…in fact…many of you out there might just wanna make sure you’ve raised your game up to the right level to jump on these tracks and be able to match the quality – just sayin’!  I think a track like “The Wave” came out seriously wicked in its ideas & mix though…overall, I’ve got a lot of love for what I’ve heard and personally talked about so far in review.

That’s not to say that I don’t love a lot of the other stuff…don’t get me wrong.  You’ll hear the skill in composition, production and assembly every time when listening to Cam’s music – I’m just more personally partial to the more chilled-side of his music.  He’s got lots of tunes that keep the list highly versatile and the party poppin’ if you want’em though – check out the rubbery bounce of cuts like “Move” and “The Section” or the up-tempo vibe of “The Line” and you’ll hear he has just as much of a grip on brighter-rhythms as he does on his deeply-chilled grooves.  Innovative & creative sounds like “Too Much Stacks” are also going to help lead this guy towards success…he really has a lot to offer and from everything I’ve seen & heard, he’s really doin’ it RIGHT.

I ain’t lyin’ to ya – check it all out for yourself right from the official homepage of Cam On The Beat right here:  http://www.camonthebeat.com/