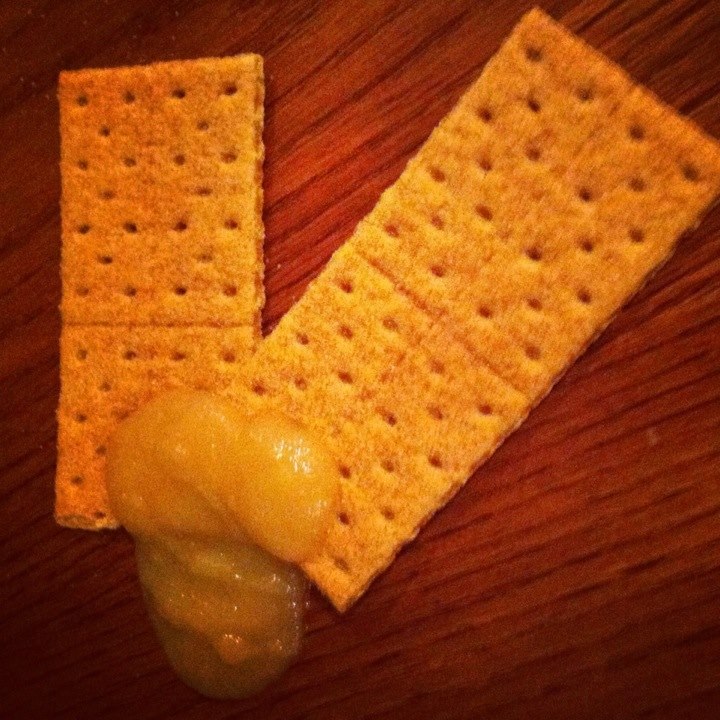 Strange…whomever submitted this for release is not all that familiar with the actual EP! And I quote – “My EP is only 3 Songs.” It’s always nice to chat with people isn’t it? There’s actual a couple references to there being only three songs on the Graham Crackers & Applesauce EP by Caloe, who I had assumed I was talking to originally. But I figure…if it WAS Caloe that I was talking to, well…he’d surely have realized there are five tracks on the EP and not three right? How many fingers does this dude have?

Alright, alright…I’ll quit playing around…I know what he meant… There are a couple of intros/skits on the EP…but…for a moment here, let’s just make a point – if it ain’t worth putting into the review, then why put it on the record at all? Consider that my friends, dear readers, dear pals…don’t let anyone know that you’ve only got three when you’ve actually made five…otherwise we’re kind of inclined to assume you don’t really think much of them either…in which case, again, why bother?

In short…it’s a damn good thing I care about the music more than whomever sent this on over – otherwise I suppose this would end up being more like a highlight-preview rather than review.

Using multiple producers to make the dream come alive – Caloe raps in a smooth-style at the outset of Graham Crackers & Applesauce on the opening beat of “Pause,” as he reflects on love & life. Making various pop-culture references, multiple name-drops and the standard-issue rap-comments on the Illuminati in our current modern-day…there’s good flow in this first beat. Any song you could choose is going to have personal reference points or insights to subjects you may/may not know about, whether it’s Caloe or anyone else…you might not identify with a single word spit into the microphone, but he does what he does well – there’s no taking that away from him. He’s not running a sprint, he’s running a verbal marathon with tons of words jammed into the flow that move along at a steady-pace within the tightly-produced beat.

I suppose I’m supposed to pass by “Real Intro” but I don’t wanna! Loved it! I know it’s a sample obviously…but I dig how it makes the EP flow with that mixtape-feel as this like, Disney-esque melody floats you away into dreamland before “Fles” starts up with its theatrical sound. Bringing the energy up, Caloe flexes more muscle on the microphone on this track with the confidence up and the syllables all spit crisp to the beat. Similar to the vibe that’s a current hit for Lil’ Dicky…a lot of what Caloe rhymes sounds like what you’d consider to be everyday conversation woven cleverly around a beat, but it works. “Fles” combines rhythm, humour and increased intensity while the music slow-burns in behind him. The chorus works well with a gentle melody-line…the verse after the two-minute mark made me fuckin burst out laughing harder than I have in weeks – lyrically I think Caloe has nailed some pretty clever rhymes down here on “Fles.”

Alright…”Intro” is tough to comment on…how about we compromise and say four songs on this EP? I’m assuming after hearing the humour throughout the Graham Crackers & Applesauce EP that he’ll be able to withstand all this wise-cracking…

“Disparage” comes ripping out ready to battle in the low-end arena. Caloe rhymes all-over this beat like a kid with crayons who has yet to learn how to colour inside the lines. Inside and out of the bars, the lyrics once again run through an entire dictionary’s worth of wordage…not sure if the chorus worked as strongly as it did for me in something like the track before in “Fles,” but the verse was well-constructed and rapped-out. The lyrical equivalent of throwing wild-punches with the intent to land each one – and he pretty much does; even what you might hear as stepping outside the metering – he ain’t. Some of the rap comes out sounding twisted and awkward as fuck, but it actually WORKS if you listen to it…Caloe remains on-point on the mic.

While I might not agree with his snack-choices or numbering system, the Graham Crackers & Applesauce EP was a damn good time…I think we’d both agree on that.

Find out more from the Caloe page at Facebook here: https://www.facebook.com/caloevera