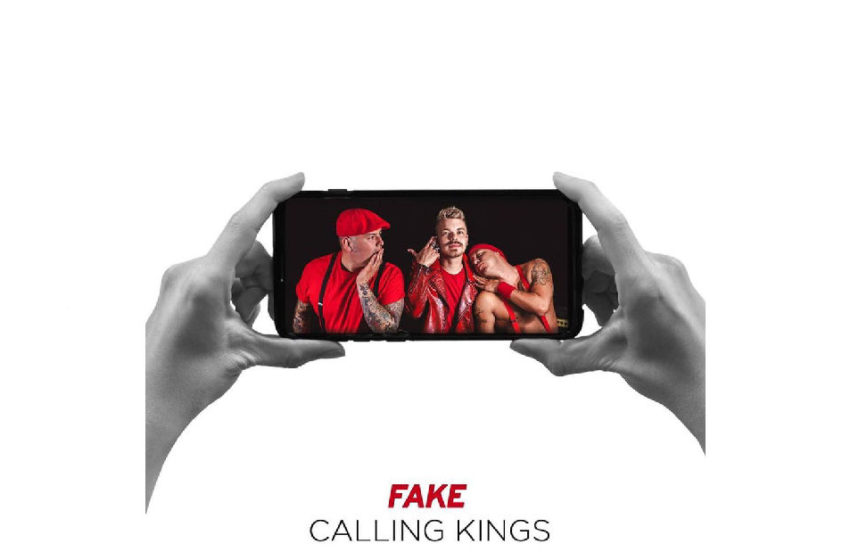 Good lordy…the Hollywood Hills of LA be shakin’ right now with the rumbling of Calling Kings and the outright massive ‘Metalbilly’ sound they’re creating, that much I can tell ya for sure.

As their self-described genre would imply, you get a serious fusion of sound with these guys – Calling Kings are a three-piece band that includes the talents of CJ (Lead Vocals, Guitar), Rick Sepulveda (Upright Bass, Backing Vocals), and Eaan Barrera (Drums, Backing Vocals).  They’ve been around for just over two years at this point, and clearly they’re determined to make a lil’ noise for ya!  They’ve already got a record out there called Demon Suit from their first year in 2017, another EP from their return in 2019 called Downer – and here we are before the decade is up, with one more offering, the Fake EP.

Full props to the band and their work-ethic…you KNOW seeing this kind of inspired creativity brings a grin to my mug – I’m always a big fan of bands & artists that are seizing the moment with everything they’ve got, and clearly Calling Kings fit into that category spot-on.  They’re puttin’ in the work!  They’re making the Metalbilly magic happen!  They’ve got a new EP and it’s just being released – someone out there drop the freakin’ balloons will ya?  Calling Kings have many reasons to be celebrating right now.

Turn up the madness, turn up the mayhem, turn up some Metalbilly from Calling Kings and ya won’t be disappointed I tells ya.  Listening to “Fake” gives you a genuine appreciation for just how much attitude & personality can play an enormous role in what pulls us in…beyond the notes of any song out there, if you’ve got these kind of ingredients working in your favor like these guys do, that can be every bit as much of a verifiable hook as any other.  Perhaps even stronger – it’s bands like Calling Kings that have the ability to play to people outside of their genre and have them quickly become raving fanatics.  Because when you put this much energy, passion, and punch into the music, even people that would have never thought that something described as Metalbilly would catch their attention or keep them captivated become quite happy to be proven wrong.  What Calling Kings are creating is exciting, 100%.

Pro tip for ya…ANY time you see an upright bass out there, it’s fair to expect that awesomeness SHOULD ensue; if it doesn’t, make sure to lineup first for a full refund.  As faithful as ever to this unspoken rule as any band could ever be, Calling Kings supply the awesomeness we’re promised…but truthfully, you’ll find it comes from all corners of the band, not just the one where the bass is standing upright in.  To a degree, I could totally make an argument for both songs I’ve got here from the Fake EP being single-worthy tunes…but they’ve chosen their title-track to get out there onto the internet with a brand-new video to support “Fake” and entice you in – and ultimately, they’ve chosen wisely.  Like I was saying…I could make the argument – but honestly, I’d have to agree with their choice at the end of the day and acknowledge there’s likely more universal appeal in a song like “Fake” compared to “When Will It End.”  That’s if we’re talking hooks-wise of course, which is usually the measurement to go by when it comes to the masses.  “Fake” is LOADED with’em, and the energy & intensity of this cut never quit for a solitary second – so gripping and savage, that there’s no way any set of ears out there couldn’t notice just how many they’ll find when they listen.  “When Will It End” dives a bit deeper into a more character-driven sound, embracing the craft, art, and wildness in their music in a more unpredictable and identifiable way.  At times…good lord…I had moments where I was convinced I was hearing what it might sound like if Tom Waits went full-on Metal for a minute or two here in listening to the throaty growl from singer CJ on “When Will It End.”  For myself personally, his vocals gave this song the kind of extra twist on a track like this that gives it the real edge of uniqueness…equally as noticeable to the ears and also appealing to a whole different side of their potential audience out there, while not even coming close to alienating the other half that might like a song like “Fake” just a lil’ bit more.  Again…it’s that attitude, presence, passion, and energy that creates the most crossover potential in their sound more than the sound of the songs even do – the cohesion shines through the consistency in their pursuit of authentically new ways to entertain ya and how much you can hear that they put into the effort.  Without feeling forced mind you…you can hear in both “Fake” and in “When Will It End” that these moments take this crew right over – that the genuine WANT and DESIRE to bring these songs to life exists and thrives within them all.

So call it Alternative…call it Metalbilly…call it theatrically-inclined-progressive-punk-awesomeness…you can call it whatever you like I’m sure – just LISTEN.  Because normal is boring AF and Calling Kings have already proven in these two songs alone that they are certainly anything but boring – they’ve got powerfully exciting tunes here on the Fake EP that are designed to bring the mischief out in them every bit as much as YOU…and dammit, MAN are they a TON of fun to listen to!  Big ups to these wild cats – you’ll hear a few artists & bands out there on the fringe one day that may remind you of what you’re hearing now in Calling Kings, but definitely not that many…and of those that are out there, there’s a very slim chance you’ll find one that brings it as hard as this band does to your speakers & brainwaves.

Viciously entertaining stuff happening here in Calling Kings – you want this band on your radar and certainly on your playlists.  From the seething social commentary they put into their words and the video for “Fake,” to the all-too-real insight it provides ya with…there’s really a ton worth investing your ears into on this lead-single from their new EP.  “When Will It End” is a brilliant cut to pair with it, adding in more of a storyteller’s style of vibe & sound to the atmosphere, taking down the pace a bit, and flashing a whole different dimension of the band that’s guaranteed to catch the people’s attention.  Or at the very least, get them raising an eyebrow or two in that ‘did you just hear what I just heard’ kinda way.  Let me be the first to tell ya – you did hear it – and from what I can tell, you’ll wanna hear it again.

The Fake EP, along with the badass new video for its title-track, are out and available tomorrow officially on November 9th – do the right thing and crash the internet doors to get a piece of what these minstrels of mayhem and Metalbilly are up to – your ears will thank you for it.  Make sure to shout it out online when you get a copy of their new EP & see the video – it’ll make for a perfectly ironic story for you to post up at The Gram and the rest of your social-media pages, along with your latest selfie of course.

You know you want another excellent excuse to post something up.  Don’t we all?

Find out more about Calling Kings at their official homepage at:  http://www.callingkings.com