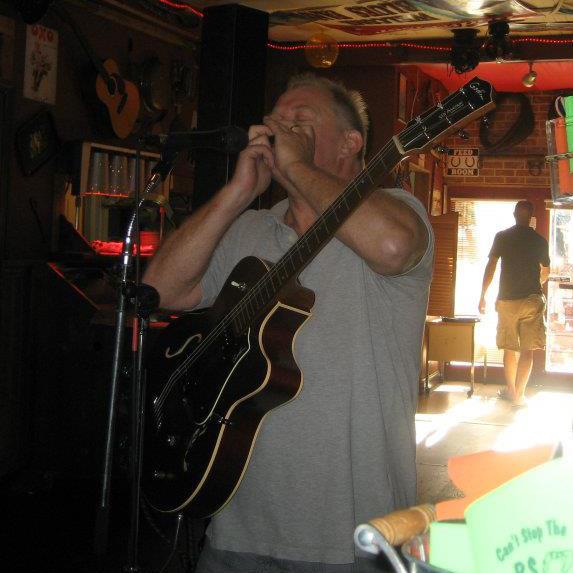 Ya gotta love this…definitely the sound of a man that knows what he’s doing here on The Way by Bud Summers. With a solid groove established in jazz/blues-infused rock, his rhythms on this album sound natural, honest & professional all at the same time. It’s outside of my normal genres…but nothing I’d shy away from that’s for certain; I’ve always maintained I’ll listen to great music from any genre – and what Bud is doing is very easy to connect with, even for ears outside of the genres he roams into. With crossover appeal contained within each song, his ability to straddle two-worlds inside of a song for one complete sound is sure to appeal to many out there.

Summers opens up the seven-song album with “That’s Why,” which is actually extremely apt, as if answering the question of ‘why did I just click on this guy?’ You get your answer straight away – “That’s Why;” and as the hooks begin INSTANTLY, Bud finds himself in full-swing quickly in this catchy first tune. A self-admitted terrible piano-player and violinist…he’s long surrendered these instruments that bested him in favour of the guitar…and if you want to know if he made the right decision, you could ask him…and I’d hope he’d say “That’s Why.” In the two-and-a-half-ish area of this album’s beginning, Bud lights up the guitar and flashes some real skill & talent with standout-tones and well-timed, precision solos that soar brilliantly into the music.

For myself personally, I connected more strongly to the jazzier numbers like “That’s Why” than I did to the more standardized-blues sounds on songs like “My Baby’s Big And Bad.” For the guitar-solos alone, I’m certainly not going to turn down this second-tune, cause Bud nails it again through and through here on “My Baby’s Big And Bad” but despite the cleverness in the lyrics it’s also tough to feel like this particular rhythm isn’t one we’ve heard many times. It’s the kind of song you can hear is a LOT of fun for Bud to play, and he certainly plays it flawlessly-well…chances are I’m just more of a jazz-guy than I am a blues-guy…but I hear the innovation he brings to songs like “That’s Why” and “She Sings Karaoke” and I suppose that’s the guy I’m looking for personally. Do I dig on people playing songs they’re confident in? For sure – and there’s zero doubt about it, a song like “My Baby’s Big And Bad” is right in-the-pocket for Bud.

The guitar-work continues to standout as “She Sings Karaoke” allows Bud to roam freely outside of the verse in some truly intricate, complex and clever solos. The smooth, smoky-vibe this song is audibly-palpable…you can almost feel this song right on you due to the thick, rich atmosphere he’s created. It’s an inventive song delivered with sparkling precision…Bud’s musicianship has been top-notch throughout all of these songs and the vocals themselves reflect the energy put out in the music of each song extremely well. “Ain’t Got Time For Whiskey” is a great example of that pairing between the energy in the music and the vocals from Bud. While it’s closer to the blues-end of the spectrum once again with classic blues-rhythms carrying the vibe as he puts together some of the best solos on the album so far – he also manages to pull this one off a little stronger with a performance that sounds like it comes with a grin and a smile on his face…and the result is actually quite pleasing…it was his attitude that made me dig on this song more than anything else about it, even the incredible solos.

There’s no doubt about it – he’s a performer and an entertainer. Listening to the theatrical delivery in his voice on “The Way I Do” almost makes it seem like he’d be the perfect candidate for musical-theatre. One of my favourites for the music…there’s an awkward beauty in this little ditty. It’s a tough one…I’m honestly not sure if he got the full 100% out of this idea…but it’s REALLY close if it’s not. In general, it’s a rhythm and groove that’s highly creative and although somewhat simple, also very complex through its assembly…of all Bud’s rhythms to this point on The Way this would be the hardest to immediately jump into for most I would assume…but I also think it’s tracks with creative & complex rhythms like these that hold up longer on an album over time.

I think the sweet-sentiment and intentions of “Bedtime Story” show some of the best of Bud Summers…but also reveal the limitations in the vocals at times. Switching between a controlled-tone and a wild & reckless-rasp…I’m not sure worked for me entirely in this tender tune. With the gentle nature of just his voice and guitar involved in the music…personally I think this one might have benefitted from Bud maintaining his cool and keeping the softer-side of his voice driving the track. The softer-tones & notes from his voice come out beautifully…the raging-energetic ones are about as hit & miss as Isaac Brock; different music-styles for sure, but that aspect of reaching out and striking-gold or finding some coal through the vocals with that reckless abandon and musical-freedom is just as much a part of Summers vocal-strategy here on “Bedtime Story” as it is Brock’s in anything from Modest Mouse.

I love a lot of things about the final tune, “Common Ground,” beginning with the opening strums on Bud’s guitar. Sounding golden from moment one, the bass and gentle-drums fill this song in perfectly as the vocals begin. Though you almost have to wonder if Bud could have found a way to jam a few more words into these verses…he might have. They’re jam-packed to the point where you can hear that it’s an audible struggle to get out a few of these lines…but what’s really astounding about “Common Ground” is that he manages to pull this one off extremely well despite the extra wordage. Each time this song played through, I kept expecting the man to run out of breath on some of these lines…but each time he somehow gets them out, just in time, in perfect tone & melody. He’s done well with this complex melody-line he’s created here and managed to transform it into something beautifully catchy with an absolutely gorgeous guitar sound staying with us the entire time.

So…where does that leave us…there are some real strengths in what Bud brings to his music and a few things that reveal the heart of a man that purely wants to make music…and entertain us, humanly…flaws & all. Perhaps that’s the “Common Ground” between us all…cause that’s certainly something I respect and understand…that want & need…the desire to sing out your songs however they might come out…to play freely…and to connect. Bud Summers has put himself right out there on The Way, through the guitars, through the vocals and through the writing…it may have a few rough-edges, but it absolutely has a lot more rounded-corners of smooth rock-infused, tender sounds your ears will easily latch onto.