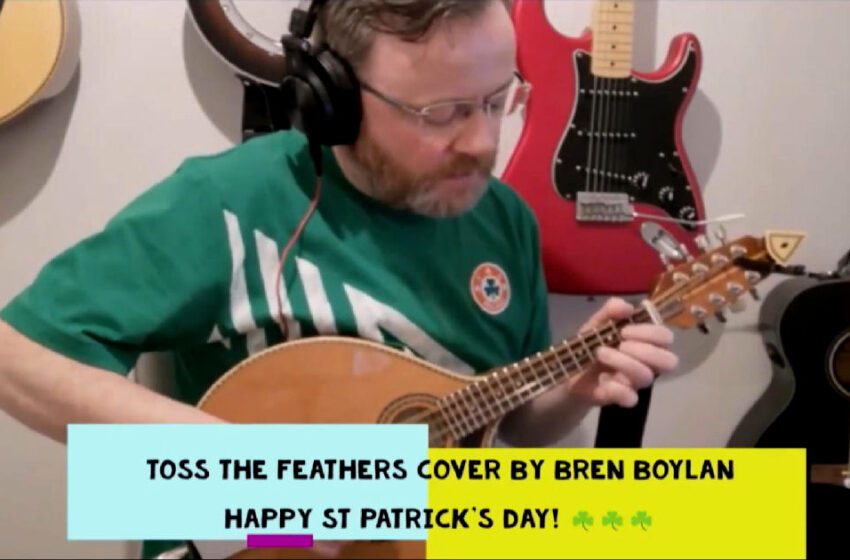 Who needs a full band anyhow?

Let’s be clear here…there’s exceptional instrumentation to be found in the music made by The Corrs – I’ve seen them play this cut themselves on the ol’ YouTube, so to be able to recreate that same kind of magic in a cover of “Toss The Feathers” as a solo artist is really quite something else y’all.  Across a series of split-screens & an entire range of different instruments to make the magic happen, Bren Boylan handles everything you’ll see & hear from the electric guitar to the electric banjo, acoustic bass & mandolin…clearly he’s a man built of many talents.  “Toss The Feathers” would be no easy task to play with it basically being the Folk/Rock equivalent of a Heavy Metal tune in the demanding intricacies of its design – and you’ll see from pane to pane in this video that Bren’s put together he’s got no problem at all tackling the multiple roles he has to play in order to pull all this off.  Heck – you’ll see he’s still got enough time to spare to give ya the thumbs up along the way!

Smartly replacing the main melody & riffs supplied by the fiddle in the original with his mandolin to rock “Toss The Feathers,” Bren’s done the Irish sound proud with his solo work here, faithfully delivering a version of this traditional song in such a way that its longtime fans will love, while also leaving his own stamp on it.  You can see from all the instruments hanging on the wall behind him that Boylan knows his way around the music realm, and watching the man bring it to multiple panes of entertainment playing’em makes it crystal clear that they’re not just there for decoration.  This is Bren’s passion, and you can hear it in the way he plays every bit as much as you can see the enthusiasm & pure joy that comes along with it in the video.  “Toss The Feathers” IS FUN…and it’s absolutely supposed to be.  As a musician, it should give you that completely celebratory & triumphant feeling just to make your way through it, let alone go the route that Bren has taken here in playing it all on his own – this cover is an outright achievement y’all!

You can also find Bren Boylan making music in SHINDIG as well, in addition to other cover tunes on his YouTube channel as a solo artist from big names in the biz like The Killers, Coldplay, and AC/DC – be sure to find out more about what he’s up to at Facebook:  https://www.facebook.com/BrenBoylanMusic