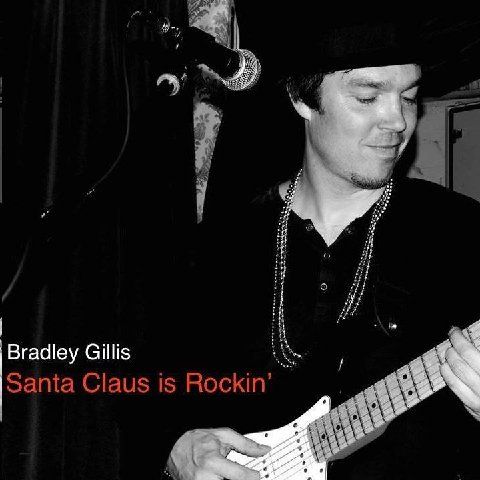 You wouldn’t have even believed the look on my face in realizing that in this ONE day, Christmas has been declared apparently…as I’m currently about to review my second Christmastime song of the day while it has yet to pass by Halloween or even start the final week of October. And no offense of course meant towards the fine Rev. Peter Unger, who wrote a Christmas song we reviewed earlier today, and none at all towards the wonderfully-talented Bradley Gillis, who, like the good Rev., apparently practices Christmas in October before the pumpkins are carved…

And in general…I’d like to review ALL of the Christmas music that is apparently just waiting for the okay to be released into pre-pumpkinland, all in one shot here…and this could very well stand & serve for all that’s to come in throughout November and even December too! Actually…thinking about it…I don’t want ANY Christmas music to feel left out…so whether or not your song is made in January, July or December, doesn’t matter…the following is for you!

Dear _______ (artist name) or ________ (band name): Your Christmas music is predictably warm, comforting, kind and inviting…but it would be an impossible task for it to do anything new. I even appreciate the new feel to sweaters & socks…and I don’t understand why that can’t apply to Christmas music. But as we already know, the songs that you will write are going to be sweet, loving, inoffensive…and…*gulp…completely normal & Christmassy-sounding…

Though I appreciate that you are here to warm our holidays…the redundancy of the same bells and twinkling-sounds of Christmas upon your new song called ____________ (insert name here) are making me sad throughout the holidays as they don’t do anything to further music, so much as keep it constant. While I appreciate comforting, soothing and beautiful sounds as much as the next Grinch…I am truly asking you for something new this year, should you like to drop of any yuletide listenings.

Again…I understand that is audibly impossible given the incessantly repetitive nature of the subject that dominates 1/6 of your year/life or more…but I’ve been really, really good this year…so please do your best. Thank you.

In the case of Bradley Gillis…of course, the same theory completely applies. Though the description of “Santa Claus Is Rockin” would have you entirely believe that the song is about to perform the Christmastime miracle of doing something NEW…it’s not gonna. I’m not here to lie to ya. This isn’t reinventing the Christmas-wheel…but it’s not re-gifting an old one either. I can Grinch-out all I want regarding the subject-matter, but the fact remains that Bradley’s song is entirely well-put together and very well-orchestrated. Am I still mad at him for moving Christmas into October? YES. But that doesn’t make him a bad musician as much as I might have wanted that to be the case after unofficially extending my ‘holiday’ season without me asking/ever-wanting for that to happen. The fact is, the dude plays a good song and “Santa Claus Is Rockin” is another potential tune you’ll hear on your stereos this Christmas morning I’m sure – you know…when Christmas music SHOULD be played…on that one day alone (FYI World).

With a Buble-esque smoothness, Gillis sings this one perfectly and charmingly throughout…and recording-wise, this song CAN make a claim to doing something differently as it was recorded involving nearly 70 people, including an 18-piece kids-choir…and everything all blends together with versatile music that sounds as bright and hopeful as the holidays. And just think about it – now there’s another track that both you and grandma can enjoy TOGETHER…who doesn’t want that right?

I kid, I kid. Bradley…you’ve done very well here brother. And if you’re still with me…and you’ve made it to the end of this hard-time I’ve been needling you with, I applaud you sir. Your song, “Santa Claus Is Rockin” is faultless, and certainly reflects the true-spirit of the holidays in a beautiful light of unity…and though I might be the Grinch who tries to steal Christmas music (and YES Bradley…especially when it arrives in October) – again…still can’t deny a good song when I hear one. “Santa Claus Is Rockin” is the complete package as far as Christmas music is concerned…now wrap it up and put it under the tree at least until Halloween is over, would you people?