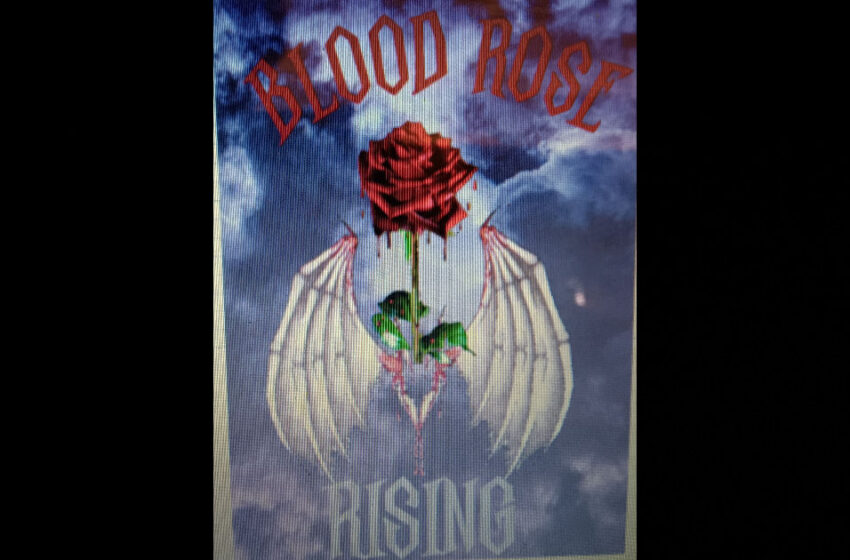 So…hmm…on the brightest of sides, I do think there’s an idea at the core of this cut.

I’m somewhat known as the guy that’ll keep it real with the scene and tell folks how I genuinely feel about whatever I’m listening to.  Sure, there’s a sense of responsibility I feel towards whatever audience I’m lucky enough to have at this point after a decade’s worth of doing what we do here at sleepingbagstudios, but there’s a responsibility I carry around much more important to me than that one if I’m being honest with ya.  You music-makers are superheroes to me…it’s my job to help assist you in whatever way I can, and the best way I can do that from my platform is to be as direct as I can be.

“Darkness Falls” needs a whole lot of work to get it where you want it Blood Rose.  To be fair to the band, I’m listening to this track in advance of the release of their upcoming record called Rising coming out in about six weeks…and I couldn’t tell ya for a certainty whether or not I’m listening to a song that’s still in the demo stages or what’s intended to be the finished product – I don’t have that information.  If this is intended to be the finalized version, I have a whole ton of concerns…if this is just a quick demo made to test the reaction of the public and see what journalists out there will or won’t be real with ya, then rock on – no harm, no foul.  Only they’d know the answer to that for sure…but there’s definitely work to be done at this particular stage in the game.  They’ve got the right bones to build around, which is a good thing…like I said from the start, there’s an idea here & it’ll work…it just needs a savage polish.

Right now as it stands, the best advice I can give Blood Rose is that there’s a major difference between playing a song, and feeling a song.  The timing issues that creep into “Darkness Falls” from start to finish are solvable…rehearse, repeat, rehearse, repeat…it’s in knowing this song forwards and backwards that eventually leads to the comfort & confidence to play it like you’re feelin’ it.  Listening to “Darkness Falls” right now, it sounds like everyone’s a bit too focused on what they’re supposed to be playing, and because of that, quite often missing the mark by a split-second or more.  When you’re feeling a song, your grip on the instruments loosens up, but not the timing – you instinctively know where you’re next note is, you’re confident that you can get there in plenty of time…and at the moment, Blood Rose isn’t there.  That doesn’t mean they can’t get there – it just takes a ton of practice and dedication, full-stop.

To their credit, creating any song without a beat or a drummer involved could potentially go sideways when it comes to timing…we’re all relying on our natural sense of what that is, and our own emotions & intensity tend to rise/fall as we make music, warping any chance of staying impeccably on-time.  From what I’ve read online, Blood Rose does indeed have a drummer – goes by the name of Duckie – not sure if “Darkness Falls” just got recorded on Duckie’s day off or what, but that sense of timing is very much missing here in this version as it stands now.  So I’m ultimately siding with this being a demo…because if they do have a drummer, they you’d assume that drummer would be featured on this cut as well, right?

Assuming those timing issues get ironed out, what I’d be looking to build around on “Darkness Falls” is the lead vocals of LL – this dude’s got a fantastic growl and the voice of Blood Rose is certainly its main strength as far as I can tell from this experience.   Structurally, they’ve got the right ideas here – and I’d readily go as far as to say “Darkness Falls” could go on to become quite the killer tune if they all step into the studio and completely nail their parts.  Timing is so essential to a fluid and flawless song that I’ll admit, it’s almost hard to conceive that Blood Rose could be ready for their record in six weeks if this is an indication of where they’re at currently…but demos can be entirely misleading, sometimes even intentionally, in order to mask what the final version is really going to sound like when it’s all truly done.  I like the tones of both Mikki’s rhythm & searing lead guitar, and Pappa J’s grungy low-end bass – but they’ve definitely got the most work to do in terms of getting this track to where it needs to go timing-wise.  LL’s doing the best he can within the looseness of this tune as it’s presently constructed – and I dig the way they come together for the main hooks of this song as well, which are very strong in the chorus – Blood Rose can definitely build on this track, but it’s gonna take some real work to make that happen.

Lyrically, it’s great…no issues there as far as I can hear…and in general, no real issues at all with the song itself once the timing gets sorted out like it should be…and they’ll get “Darkness Falls” to where it should be if that’s what Blood Rose really wants to do – that part is up to them, of course.  I point things out, I make my comments – I try not to judge too much, and I’d be the last person to tell you I’m the end-all be-all of opinions – I’m not.  We all come from different places, with different means, different talents, different abilities, etc. etc. – not everyone out there can just jump into the professional realm & expect that everything goes smoothly…heck, not even every garage band would be able to assume that’s the case either.  Not everyone gets the opportunity to rock in a full studio set-up, and the methods of how things get recorded vary from band to band, artist to artist – all I can do is my best to understand what I’m listening to based-on what’s coming through my speakers.  So for me, ideas are always the most paramount element…then comes the ingredients – aka, the players involved and what they can bring to a song.  Ultimately, I think Blood Rose has the right ideas, the right players, the right tones, and great hooks to be found in the vocals & unearthed in the music…”Darkness Falls” sounds like it’s very much in its earliest stages to me, but if they’re willing to put the work in, there’s a song to be had here for sure.

Find out more about Blood Rose at their official website at:  http://www.bloodroseroom.com