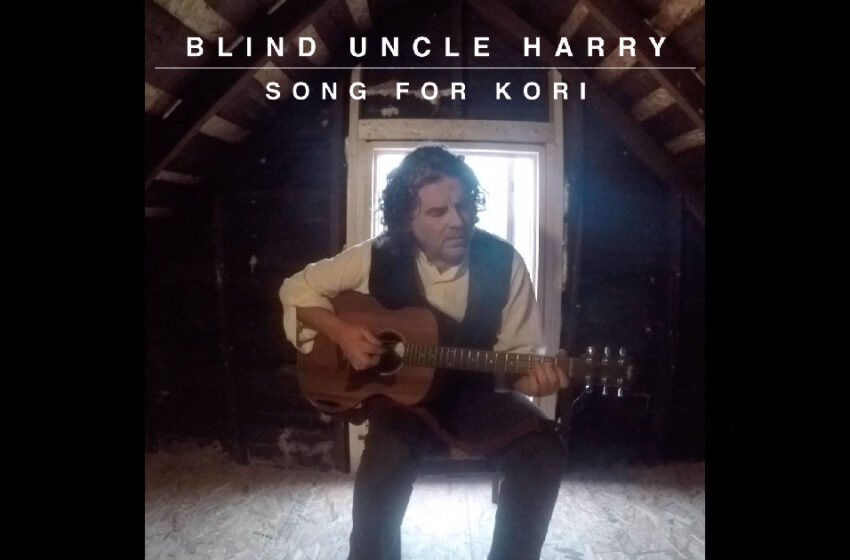 Blind Uncle Harry!  What in the all-heck am I listening to here bud?

This is more clever than you’ll realize at first, I can almost guarantee you that.  I ain’t gonna lie to ya – when I gave this single “Song For Kori” a spin for myself, even I was fooled a little bit by this guy at the beginning.

Yet something told me to dig a little deeper here.

You see…on the surface level, it would be easy to judge a song like this that consists of a couple of notes & some arguably shaky vocals and say that Blind Uncle Harry isn’t exactly recreating the wheel here – and in some ways, that’s still a fair observation to make.  He echoes the folk-singers of old, way back when before everything had to be all slicked out with top-shelf studio production…when the natural sound of a guitar still held its true magic with the masses.  Vocally…honestly he doesn’t really wander off key so much as there’s just a whole lotta words to this tune that makes it extremely challenging to sing, and no real rhyme-scheme to rely on either…but we’ll get to that…the bottom line is, I felt like the man did end up holding his own in that department, stylistically emulating a specific vibe with intent.  There’s also a pure sincerity in Blind Uncle Harry’s voice that’s bound to appeal to a bunch of you Folk fans out there as well…I’d readily concede there are actually quite a few endearing things about this cat.  Where “Song For Kori” makes its biggest impact & impression on us is genuinely through the combination of all that’s involved…which includes the brilliant one-shot video, and most certainly the lyricism to be found.

Because at the heart of it all, you’ll find this is one spectacularly sweet, and exquisitely twisted tale.  Also, accurate AF in case anyone out there is wondering.  The strengths in what Blind Uncle Harry does as a songwriter, actually end up working incredibly well and reveal themselves in-full when you start to piece this whole puzzle together.  If you’re wondering why the song itself sounds as isolated & intimate, like it’s recorded in a barn somewhere out in middle America…well…look no further than the video & you’ll know exactly why that is.  While I usually assume that what we’re hearing in a video version of a song is the recorded cut laid down in the studio, this time around, I believe it’s actually the opposite that’s true – I think what you see onscreen is the actual recording of “Song For Kori” taking place, and if you’re listening real close I think it’s that dog bark in the background at about the 3:31 mark that might confirm my assumption.  For a one-shot video…honestly, I can’t explain just how perfect it genuinely IS – obviously it’s not what I’d recommend for every song or all of you out there, but look at the amount of character in the setting around him, look at how it lets the light in from the back like an old Gospel style building, and then of course, consider the sound & style he’s gently rockin’ – truly, everything really fits.

So now…let’s get to the heart of the matter, which is the words he’s written here – words that prove this dude’s got an insightful perspective on the world and unafraid to call it like he sees it – and of course, I dig that.  As I’ve long said & stood by every time – real success as an artist or band is achieved by having something to prove, or something to say…if you’ve got one of those qualities, or both, you’re well on your way to a career with longevity.  When you hear the storyline that runs through “Song For Kori” for yourself, believe me, you can’t miss the fact that Blind Uncle Harry has plenty to say – but you’ll likely be more than impressed by the story he’s woven into the fabric of this Folk tune and how apt it is.  Grim as all-hell by the end, sure…but an accurate depiction of so much that is wrong with the world’s richest nation and a scathing depiction of the America we’ve come to know, which has some real shit to get sorted out right now.  But without giving this whole scenario away, essentially you get the story of a father & daughter…dad’s doin’ his best to get by…eventually he can’t work anymore and the bills start stacking up…and ultimately, he comes to the conclusion that he’s worth more dead than he would be alive to his daughter.  What’d I tell ya – GRIM right?  Yeah, well…buckle-up hombres because good ol’ Blind Uncle Harry ain’t finished with you yet.  Think of it this way – while it’s likely that the bulk of this tune being based in a fictional way in regards to the characters & whatnot…you also can’t deny how all-too close to home a story like this might be for so many – as in, he may or may-not have made up Kori and her father, but these characters are every bit as real as you and I are.  You know them – because we see them on the news or know them as our neighbors…we understand the dire circumstances so many people live through day to day; and yep, right in the middle of the world’s richest nation – which Blind Uncle Harry has no problem at all holding to account at the end of this song, where he’ll go on to really prove he IS an artist with something significant to say in the final reveal of the powerful points he was looking to make by creating this cut all along, tying in the relevancy into the modern day mess we’re still stuck in right now, at this very moment.  Clever & cunning songwriting from Blind Uncle Harry here on “Song For Kori” – all things said & done, by the time he hits this single’s main conclusion, it lands with the resounding thump of the weight of its message, delivered by the most delicate means, but hard hitting all the same.

Find out more about Blind Uncle Harry from the official website at:  https://blinduncleharry.com