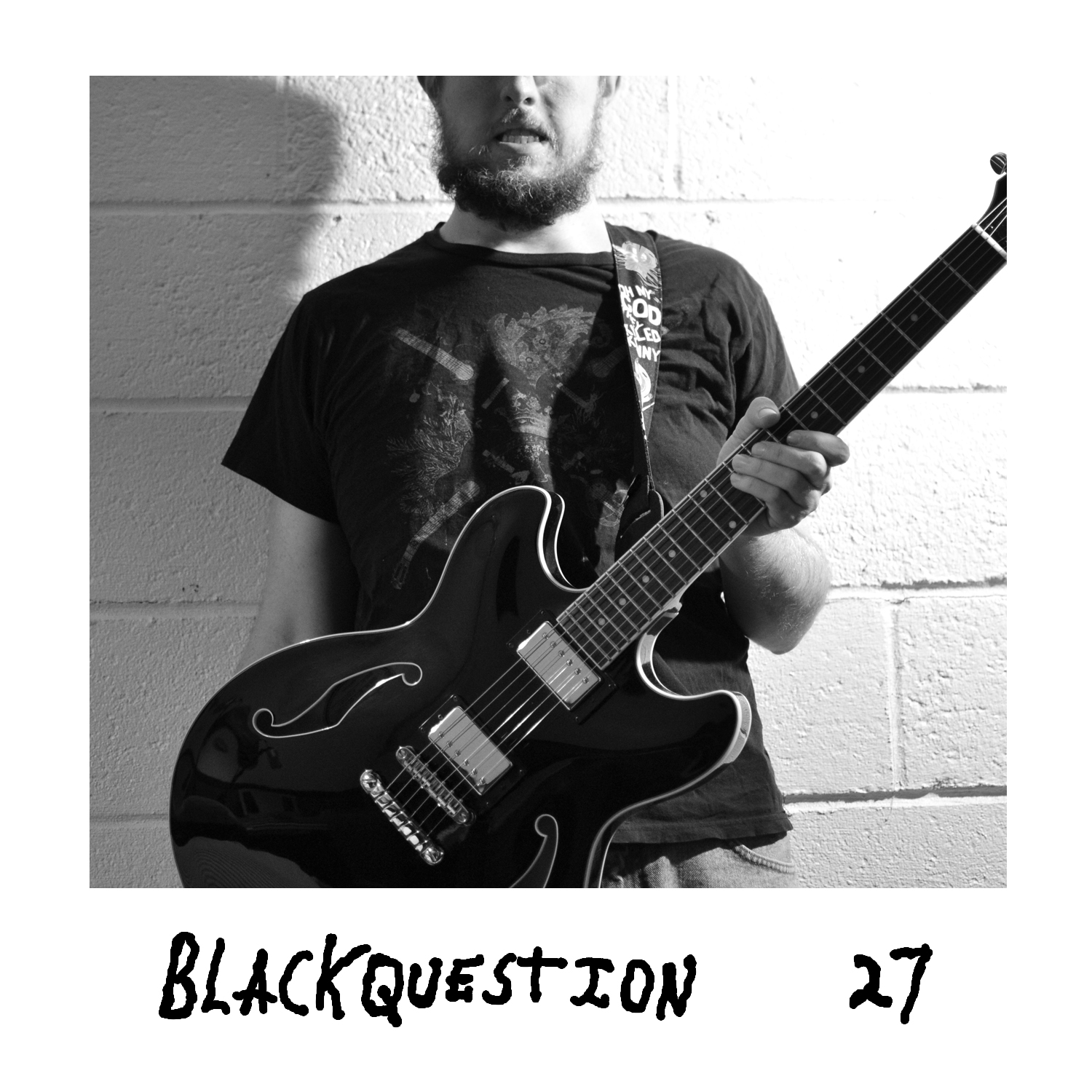 Canton, Ohio’s BlackQuestion is an enigma of sorts. You’ve gotta respect the little details you find along the way sometimes when researching a band or artist…and a quick look into the BlackQuestion page at Bandcamp will reveal that it’s a solo artist driving the music – one “that does not have much to say.”

Nuff said! What else is there to say? I 100% agree – but today I think I’m sticking with my regular role as typist on the keyboard & clicker of mice – I’ll let BlackQuestion take the honor of making the music supplied today here in review.

Like many albums, this one has moments that will resonate strongly with you, others that will attach themselves to you over time & listening, and some that you altogether might not ‘get.’ As 27 starts out into “Ballad For You,” I’ll admit…I was wondering what I had been sold versus what I was getting at first! I mean…this dude promised me ROCK did he not? In its place, we’ve got a nearly soft-rock ballad coming at us, possessing all kinds of indie qualities that make the genre both challenging and captivating to listen to. There’s genuine emotion here, presented in a fairly alternative style overall to the ‘norm,’ and as BlackQuestion hits the chorus, it sounds like pure heartbreak and longing. It might not be typical or traditional in any sense, but the sentiment pours through clearly and the genuine communication of this song-writer is established early on.

There we go! “Starving Musician” brings out a good pop/grunge vibe from BlackQuestion, something like Mudhoney meets Dinosaur Jr., maybe along those kind of lines. Great driving beat on the drums and a tuneful guitar overtop that plays cleanly with great sound & bright tone. I think the vocals here worked a little more in favour of BlackQuestion, simply due to having an idea of what they would sound like from the opening cut, and also from a mix that settles the voice into the inside of the music as opposed to staunchly upfront in the mix.

Because there definitely exists a unique song-writer here with a unique perspective and ear for sound; he takes risks – and like all risks we take in life, some pay off better than others, but there’s always a reward in the attempt of an idea and nothing to be gained without pursuit. Songs like “Imperfect,” work out well, revealing great pop/rock sensibilities through a simple melody delivered with signature style. Truthful, playful and internal in nature, “Imperfect” reveals some of the inner-thoughts of BlackQuestion and the slow-paced rock of the song actually reminds me somewhat of the early records and pop-sentiments of the early recordings of R.E.M. that hinted at more beyond the rock-aspect of the music.

A tougher moment on “Creativity Has Nothing,” which wanders around slightly…but again, at this point in the album you almost have to wonder if many of these moves or slight-slips are purposeful, stylistic choices. BlackQuestion could very well be bringing about a new style & sound…and something ‘different’ to our ears can always find a struggle to be accepted. I think there’s a type of beauty in a song like this…one that helps you understand and appreciate the passion and desire of this musician.

“Sing For Love,” is a sweet, simple pop tune that has a hypnotic quality to it in its melody that pulls you in. Almost sounds like maybe a B-side from the Matthew Sweet collection; again, it’s that earnest & humble quality in the vocals and lyrics that carry this fragile melody. It’s not typical either – but what on 27 has been so far? I dig it.

There are some people in our world with what I’d consider to be a gift to hear things differently than many of us do…and these tend to be artists and musicians who challenge what our ears accept with new ideas, sounds and styles. There are great ideas on display throughout “Manic Depression,” “Silver Lining” and “City Lights” that can’t be ignored. The execution and stylistic performances of BlackQuestion will leave you guessing and scratching your head at times, and at others you’ll completely hear a song-writer writing new sounds that work really well and burn slowly just below the surface. Of those three, “Manic Depression” and “Silver Lining,” found their way to acceptance for me with inventive & creative ideas – but it would end up being “City Lights” that caught my attention the most in the middle of this album. Almost like a young Beck here, BlackQuestion takes a turn at the piano in this melodic and emotional piece…really old Beck…back when no one would have seen him coming either…

Really bringing out the rock for “Don’t Want To,” the guitars come up and combined with the vocals almost go for a psychedelic/grunge sound. Another track that’s a little tough on the timing-side, it remains relevant with another good idea on display. Definitely another track to remind me of the Murmur-era of R.E.M., through the chorus hook, but also modern-enough in sound when that guitar solo comes crunching & ringing through that it could fit in easily with those that like what Jack White is up to these days.

“Give Me Some Truth” is definitely one of my favourite tracks on 27 for its melancholy music. Lyrically it’s got a perplexing metering, but the emotion is fully put in here through the vocals…BlackQuestion sounds truly tortured here in the vocal delivery as he struggles to latch onto whatever might be real in this world. Another excellent & simple solo here…good tones on those guitars. Musically, it’s a standout on the album for sure, commitment in the vocal department as well, although the added theatrical elements on the delivery may/may not work for everyone…

Settled down, focused and bringing us out of the dark and into the light, “Optimism” switches up the energy on the album and delivers in full. Here’s where you can hear the modern day influences of the melodic aspects of grunge bands like Nirvana, Foo Fighters, Mudhoney and the many others creeping into the background of BlackQuestion’s music. Full of self-examination and introspective perspectives, 27 finds itself a real winner here late in the album on “Optimism.” Wouldn’t change a thing about it.

The positivity carries on throughout the pop/rock anthem of “My Own Day,” before the album switches energy towards the end in the first of the final-three with “Turning Blue.” Good low-down early grunge vibe on “Turning Blue,” again – those of you that are fans of the Sub-Pop heyday and all the random CD-singles and import-EP’s, you’ll be into the post-grunge dynamic of BlackQuestion on 27. Creeping in like something from the poetic & dark alleys of Mark Lanegan’s earlier music, with the grinding guitar sounds from bands like L7, melodic cymbal-ride keeping this beat in check…”Late Night Blues” is somewhat eerie, but another strong track here at the end of this album leading into the final acoustic song to end off 27.

Putting energy and a large-strum on the acoustic-guitar, “Don’t Want To” comes back to a brighter life here at the end of the album as “Don’t Want To (Live) (Acoustic).” I kind of really dig on the way he brings an acoustic guitar to life…I wouldn’t mind at all hearing how an acoustic go of it all would sound like for BlackQuestion. Or a remix album. Or an orchestral effort. Or a post-rock jazz-infused funk-band…

…you get the idea. Musicians, artists and bands like BlackQuestion truly are enigmatic and ever-changing the style, sound and scope of their music and ideas. What rings through clearer than anything else at all on this album 27, is the sheer desire and will of a person that truly wants to communicate through music and spends their life working at refining their craft. BlackQuestion puts a whole human-race’s-worth of heart and genuine passion into the music; as his experience continues to grow, so too will the music and the expansion of these great ideas.

It’s kind of like imagining the modern-day Beck conversing with the old Beck sitting on the streets busking, with the modern one attempting to chill the other guy out, to let him know that it’s all good…that the music eventually ‘gets there.’ Old Beck probably wouldn’t believe new Beck at all…but somewhere along the lines, truly great ideas all find their way to even greater, universal support. With a little confidence, a little belief and a little more refinement, BlackQuestion could go a long, long way in music…who knows – maybe he’ll play nearly 30 instruments, write all his own songs and win a Grammy of his own one day…you really never know.

Have yourself an extended listen and check through BlackQuestion’s music-history at: https://blackquestion.bandcamp.com/