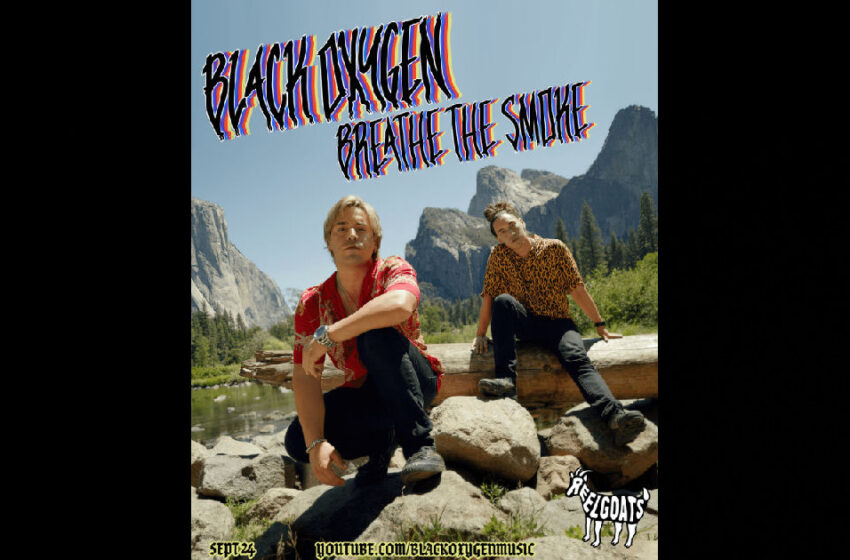 Barbeque sauce on a smore?  No!

Can’t do it, ain’t fallin’ for it, not gonna happen y’all.  Even IF I liked smores, which trust me, I don’t – my wife is a chocolatier homies…I’d get kicked straight outta my crib if I gave this snack a simple pass.  So no – y’ain’t gonna find me recommending you do much more than watch the video & have yourself a listen.  Because that part I can fully stand behind doing no problem.  As far as their snack advice goes though, that all needs work & I ain’t gonna lie to ya about that.  I can see the blunt in the video there boys…and I’ve had no problem breathin’ the smoke in my lifetime too, and I will be fully real with ya – it has also influenced my snack-time decisions in a variety of devious ways – but this…THIS?  BBQ sauce with chocolate?  No!

Okay.  Clearly I’m having a bit of fun with this – don’t get it twisted.  The real facts of the matter are that within mere seconds of their new video onscreen, Black Oxygen gets you immediately interested by using this clever twist on camping-based culinary cuisine to their complete advantage.  BBQ sauce and a smore might seem like a strange combination – because it IS – but the reality is, it instantly draws your curiosity in.  PLUS…from what I’ve been reading, this sauce they’ve got is actually no joke whatsoever – they’ve been making this stuff for a while now, it’s fully legit, and you can find it for sale right on their website with the rest of their merch.  I’ve been around a while now…this grey in my beard will prove that to ya…and I’ve yet to see barbeque sauce show up in a merch store to-date – make no mistake y’all, Black Oxygen is approaching this whole music-thang from a different angle than the rest and it makes all the difference in the world.  I’d be willing to bet they’re slangin’ that sauce like crazy!  And I’m praying to the good ol’ Macedonian Jesus that there are many more uses for it rather than just adding it to smores.

Anyhow.  This ain’t the food network over here & it’s probably best I stay in my actual lane – the music.  Besides – after seeing like, what…something like ten or so supremely satisfied & smiling faces chowing down on their BBQ sauced-up smores, who am I to judge?  Watching their reactions to it from the crew, to the duo of brothers, Nick and David Lyle of Black Oxygen…and just how much they’re enjoying what they’re consuming…I’m considering switching from drinking water to full glasses of their BANGIN’ sauce!

Directed by Reel Goats – Black Oxygen has put together a single/video combo that genuinely stands out, and puts a ton of the personality & chemistry that these brothers have to offer straight onto your screens and into your speakers.  Really well done all-around – I’m a huge fan of putting your true self out there in any way you can when it comes to what you do – it adds significant authenticity, and the way they’ve approached the making of the video will prove that’s the truth.  Not only are they having some fun with it all – but when it comes time to flex for real & make the music part of their music-video happen, they snap right into place professionally and hustle up some results you can both see & hear.  Full props to Reel Goats & the whole crew of talent working alongside them…they’re representin’ exactly what I’m talking about here – when you’re out there to do the job right, working with artists like David & Nick who wanna have a good time but also get things done – you can see how energy always takes its cue from the main stars of the show, and by the end, they’ve got everyone having a great time.  That’s what I mean, that’s what I’m saying – not just solid music & videos – but a welcoming aura & vibe that breaks through the 4th wall here in the behind-the-scenes footage/beginning & end of “Breathe The Smoke.”  Lyrically…perhaps not as welcoming…Black Oxygen makes it pretty clear they’re seekin’ out some space and it’s probably in all of our best interests to give’em that and try not to cross their path, you feel me?  “Breathe The Smoke” is a lot less chilled-out thematically in comparison to the serenity they seem to be finding as they look out over the forest & mountaintops…they might appear to be pretty laidback & zen-like dudes, but make no mistake, when it comes time to bring it to the mic, they’re ready to supply every syllable with the attitude, power, and punch required to make their words felt yo.

Everything you’ll read & learn about these dudes will reveal they’re thinking on another level when it comes to how to approach their career – hence you get standout ideas like this that are pretty much a crossover adventure that takes them straight from a commercial, to the main business of makin’ music, to behind-the-scenes footage that gives you major insight into who Nick & David are, and how the talent surrounding them is just like family, in on all the fun, and ready to bring their A-game when it comes time to get serious too.  These dudes have even worked with the legendary Danny Trejo y’all – that’s verifiable street-cred to the nth degree right there y’all – if Danny’s into Black Oxygen, the hellz YES we all should be too!  “Breathe The Smoke” also brings ALL that smoke straight to ya – they’re all fired-up, the song’s intense, it’s got that hybrid fusion of Electro/Rap/Rock that gives it a genuinely edgy vibe to go with their explicit lyricism – and I ain’t even remotely kidding when I say the main hooks will stick in your mind like a BBQ sauce-covered smore will stick to the roof of your mouth whilst you consider your choices in life.  For real – it’s a massively memorable tune with hooks you’ll be spittin’ along with’em – and quite likely for days & weeks to come.  “Breathe The Smoke” officially came out TODAY and it’s quickly heatin’ up the scene already…don’t be surprised when these guys scorch their way straight to #1.

Find out more about Black Oxygen from their official website at:  https://shop.blackoxygenmusic.com