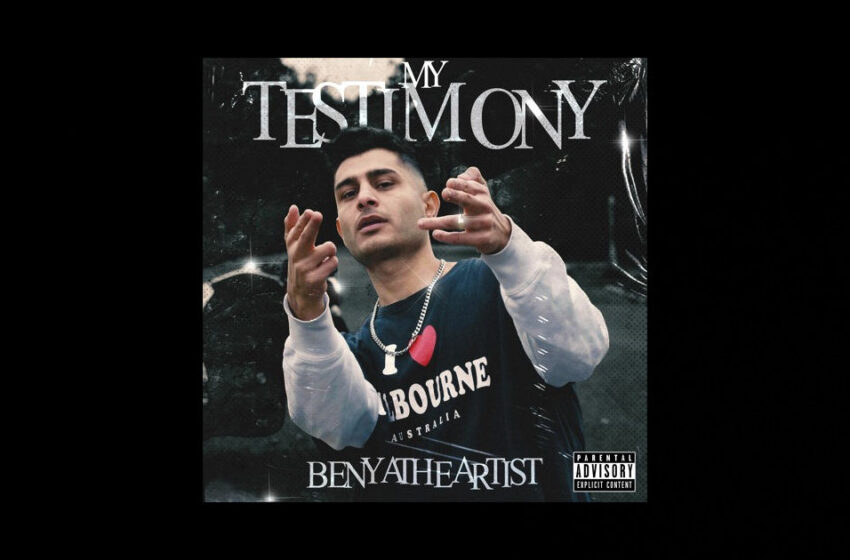 Honestly?  The message comes across crystal clear homie.  And not only do I hear it – I genuinely believe it’s important that everyone out there does, no matter which part of the world anyone is living in.

For a guy that’s been out there for the past couple years releasing all kinds of covers of music online at YouTube from Miley Cyrus to Creed – I gotta admit, I wasn’t actually expecting that BenYaTheArtist was gonna flip the script and start rapping based on what I’d seen he’s put out there in the past.  It’s never a bad thing to keep the people guessing as to what you’ll do next when it comes to the art of making music though…and I highly suspect that BenYaTheArtist is going to turn a few heads with this new single he’s got called “My Testimony.”  As I yell about all the time on these pages of ours, the more YOU that YOU put into YOUR music, the better the results become – and BenYaTheArtist should be proud of what he’s accomplished with this new single, which is clearly based on the journey he’s taken in life to be here with us all today.  The courage that this young artist has already at such a young age is something that the older adults of this world could really benefit from learning from – this dude’s got true perspective.

As artists, we arrive at a place where not only do we want to include personal pieces of our own experiences, but if we’re doing things correctly, in my opinion, we reach a point where we want to take those real-life examples we have, and use them to help the greater good.  Such is the case of BenYaTheArtist on “My Testimony,” where he not only retells the story of his own immigration, but is now strong enough to actively take on the establishment and the rules that seek to oppress others.  It’s honestly quite the beautiful thing when you think about it…BenYaTheArtist likely had to go through several years of wondering where, how, and IF he fit into the society he found himself a part of, and now he’s turned into a young man, artist, and activist that’s got the stones to seek out change for those that might follow a similar path in life.  I salute this guy for his altruistic sincerity & desire to shed light on the truth – “My Testimony” is a song that makes you appreciate how difficult it would be to maintain a positive outlook when so many ignorant people out there would be telling you that you don’t belong.

While our main man Ben is pointing out the immediate problems within his current location, the reality is that the denigration of immigration has been gaining even more traction, speed, and reach as of late than it had say, oh I dunno, let’s say about six years prior (feel free to do the math on why that is and who is ultimately responsible for being the real dick that promotes such rampant hate with radiant glee) – and assuming we don’t choke this planet out environmentally or blow ourselves up in this next decade to come, the history books of the future will certainly prove we were stupid motherfuckers on this planet for a very, very long time.  If you think for a moment that what happens in one area of the world has no impact or effect on where you live – guess again – because everything is interconnected.  We’re citizens of the world…and where we’re born could either be like winning the lottery or a total crapshoot.  All I know for certain is that we all NEED each other in a world that is totally, 100% connected – and to say that immigrants aren’t a valid part of the solutions for the many failures of our past as we head into the future to come, is just plain shortsighted.  We all came from somewhere.  We are all immigrants in some way.  We are all human beings, we all need empathy for whatever situations we’re in, and we truly deserve the understanding of the people surrounding us – because ‘home’ is where you ARE.

So you betcha…I’ve got a whole lot of love for an artist like BenYaTheArtist that is standing up for what is right.  This world is way too big to feel like we need to send people away, and it’s way too small to feel like we can do everything on our own – “My Testimony” is a track that shows Ben is on the right side of history.   It’s our responsibility to join him in the battle for change – “the future’s you” as he says, and he’s right about that.  It’s easy to become jaded and think that we’ll never do enough in one lifetime to make any measurable difference…seeing BenYaTheArtist thriving in his craft as an artist, loving the place where he’s living and showing REAL respect for what Australia is about at its core – not what’s revealed to us by their political policies – it’s all inspiring to say the least, and it all sounds pretty damn good too.

Change might not happen overnight y’all…but with leaders like BenYaTheArtist rising up and being unafraid to use their voice at a time in history where it truly matters, we’ll get to where we need to be.

Find out more about BenYaTheArtist at this official multilink:  https://linktr.ee/BenYaMUSIC