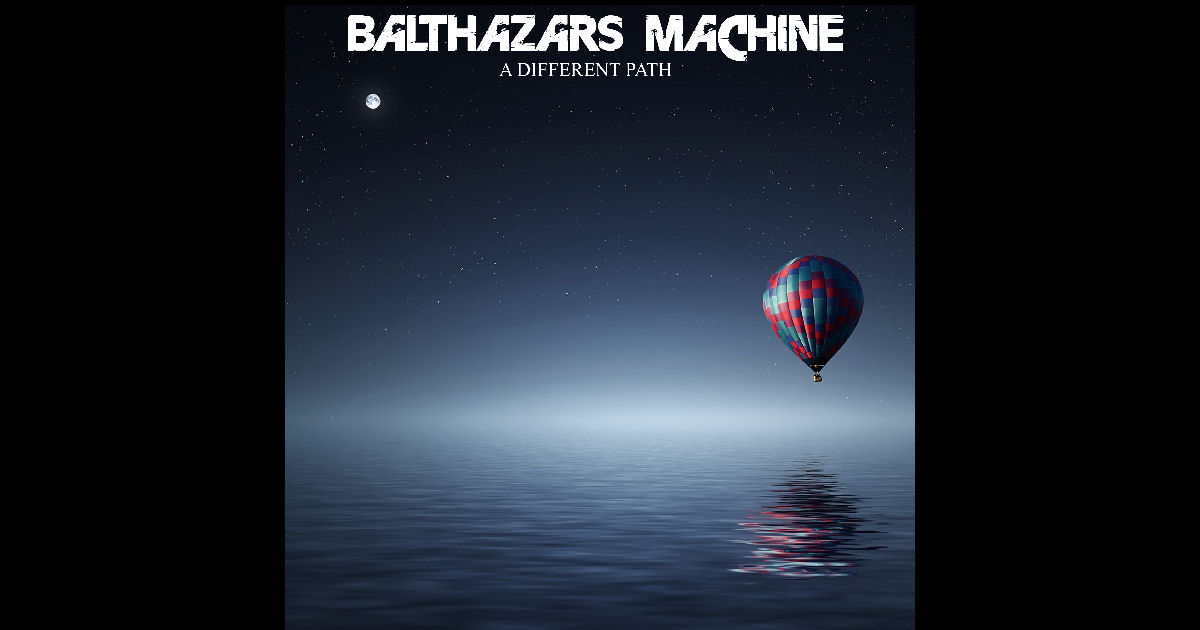 Alrighty!  Something for the heavy/hard-rock crowd here.

According to legend out there on the internet, Balthazars Machine first started back up in 2003.  The solo-project of Börje Reinholdsson, who’s been out there on stage throughout the Swedish music-scene with a whole bunch of bands, decided to venture out on his own in Balthazars Machine.  With a couple albums already under its belt including Reconstruct Me in 2004 & Robotica in 2006 – clearly it’s been a while since Börje fired-up this project…but you certainly wouldn’t know it from the way it’s played.  You can definitely hear the talent and you can absolutely hear that riotous style that’s defined Hard Rock for years & years – you’ll hear the guitar shredding, the fist-pump inducing sweaty sounds of arena-style hooks and inarguably a slight tinge of that Hair-Rock sound in there as well – it’s all here in some form.

The supercharged rock-antics start revving up immediately in the wild instrumentation starting out the first track “I Won’t Slow Down” before it subsides into a smooth groove to allow for the vocals to find some room in the mix.  Börje is kind of riding that fine line into a more edgy style of what you might think a band like Bachman Turner Overdrive would create today if they were still writing new originals.  Whether or not that’s what he’s going for or not, I couldn’t tell ya…but that’s what I’ve got for a comparison for you all here, that’s what it sounds like to me.  I can’t imagine that being a bad thing – plenty of appeal in BTO’s style & songs and presented here in a more aggressive and powerful form via Balthazars Machine, I think the update on that whole sound could work out really well in Börje’s favor.  The rumble of the bass on this song is UNREAL…like, I can’t even express how much I love hearing it when you get a clear dose of it…there’s only a few moments where it really gets the spotlight, but what incredible tone!  Everything’s giving you something worthwhile though, no matter where you turn – the drums are relentlessly energetic, the guitars are off-the-charts cool in the solo and keep the entire song stocked full of fired-up crunchy chords…and the breakdown is a huge highlight on “I Won’t Slow Down.”  I’d milk that spot live from the stage if I was Balthazars Machine…we all know that final explosion back into the vibrant energy of the chorus is coming back…teasing it out during a performance would just be a ton of fun.  Here on the record, the breakdown lasts just a short amount of time, but the bring-back and payoff on the return is gigantic – Börje surges with harmonies and energy right to the very end.

Dig the way the drums play a huge role on busting into the next cut, “Crimson Tide,” and I really like the supporting layer of keyboards that runs through this tune as well.  Very subtle in the mix, but a highly effective part of the sound for a large part of this song…when they come back in or disappear, you’ll notice it in the vibe.  I get the impression that Börje wouldn’t need much more than a single amplifier, guitar, and microphone and he’d already be more than entertaining – but the additional instrumentation he supplies to these tunes is smartly placed & precise stuff too.  You could probably put Balthazars Machine somewhere in the middle of something like Motley Crue and Van Halen…there’s no doubt that there’s more of a dated sound attached to what’s on A Different Path, but just like Börje himself – there are literally millions of Hard-Rock fans out there that still absolutely love this stuff.  Music shouldn’t be relegated to a certain timeline anyhow – not anymore…the fact is, we all have access to everything online, and for those that really love this style of Rock, well, why in the hell shouldn’t they have some new options to choose from as well?  That’s where a band like Balthazars Machine comes in, confidently ready to fill that void with music that Börje genuinely loves to play, and many listeners truly love to hear.  He’s just giving the people what they want!  And as far as I’m concerned, when you go into a certain style like this that listeners know & love, as long as you play it like you truly OWN it, you’ll find that acceptance with the people out there.  Everything about the way Börje plays and sings radiates confidence, enthusiasm, and genuine passion – he’s having the time of his life rocking out to a song like “Crimson Tide” and it’s completely because of that, that you’ll likely find yourself rocking right out too.  Stay tuned to the social-media pages for Balthazars Machine as well – word on the street right now is that this cut is currently getting the video treatment, so be ready for that to drop online sometime soon!

“May the bridges that I burn, light my way” – that’s an incredible line!  You’ll find that on the middle cut from A Different Path – and credit where credit is due, that’s a seriously insightful line on “Bridges Burned” – almost one you’d assume you would have heard along the way, but that’s a fresh line as far as I can tell.  Metaphors like that really work for me – that’s an empowering line, and you can hear that Börje sings it with the commanding authority it needed – it’s like that moment of breaking free, accepting how things are, and moving right through any obstacles to blaze your own trail.  You just never know what’ll catch your ears in any given song or listening experience – and sometimes you just need the tiniest moment to pull you right into the rest; with that powerful lyric lighting this track up to the next-level for me, every time I got a chance to hear it, I dug “Bridges Burned” a bit more.  You can feel the release that moment comes with…you like, ending up bracing for it when it’s coming up at the end of the chorus, ready to sing along with you own max-power.  The crunch in the guitars and bass throughout the verses is solid, I like how the pre-chorus lightens-up the melody & sound just a bit before plunging into the meat hooks of the chorus, sung in a two-part call/answer style.  Great intensity and attitude in this song that a lot of people will dig on – that punch into the chorus always makes an impact – Balthazars Machine finds a wicked & inspiring idea here on “Bridges Burned” and capitalizes on it.

I really like how the backing vocals added to “Man Down” – Börje does really well in providing his own harmonies to this solo-project, perhaps no better example than how he approaches them on this tune.  Loved the switch into the guitar solo on this song as well – you can audibly feel the punch in the transition around the 2:20-ish mark where he’ll shift into a brief moment of instrumentation before running through the main hooks again to the end.  He’s got an interesting singing voice when it comes right down to it – as far as the lead in this song is concerned, I like the enthusiasm and spark he’s got in his energy, I think his tone is right where it needs to be – but I’d be lying to ya if I didn’t mention the fact that it sounds like he’s giving it everything he’s got.  I’d imagine he is – these notes sound like they’re right at the top of his register and hard to hit with the consistent energy required, but he manages to pull it off, even if he sounds like he’d be completely out of breath & red-faced by the end from the strain.  Much like on “Crimson Tide” from earlier on though, you’ll really notice just how much it adds to the music & melody of Börje’s ideas when he’s got the harmonies flowing through the music of Balthazars Machine.  And like…good lord…can you ever tell from the way the stomping beat & storming energy of “Man Down” is like, hard-evidence that Börje eats, sleeps, and breathes ROCK or what?

With an epic and ominous beginning, “Shadows Of The Past” cranks-up one last hard-hitting rhythm & groove on A Different Path as Balthazars Machine storms on to a decisive victory here.  Almost more towards a King’s X sound here, once again putting those harmonies on display right in the spotlight where they belong for another memorable chorus, but I gotta admit, it’s the powerful storm through the verses of this song that seemed to have the most menacing & addictive energy.  Well-written tune though – I think you’ve gotta hand it to Börje for a really tight EP all-around; this is only going to ever be a matter of personal taste…some people love this stuff while others don’t, which is true of every style of music out there – when it comes to execution, production, or performance however, you couldn’t possibly take a single point away from this guy when it comes to the cohesion on A Different Path.  Dude’s clearly got a vision for this particular project and how he wants it to sound, and I’d be willing to wager a bet that even Börje feels like these five tunes all came out exactly as he’d intended them to be.  “Shadows Of The Past” gives you one last taste of his crunchy distortion and controlled, professional approach, while still pumping out a memorable chorus, bold vocals, and stunning instrumentation along the way.  Solid ending to what’s been a wild ride for sure – Börje should be stoked about what he’s created on A Different Path as Balthazars Machine – this is a real Rock record that diehard fans of the roots of the genre will seriously dig.