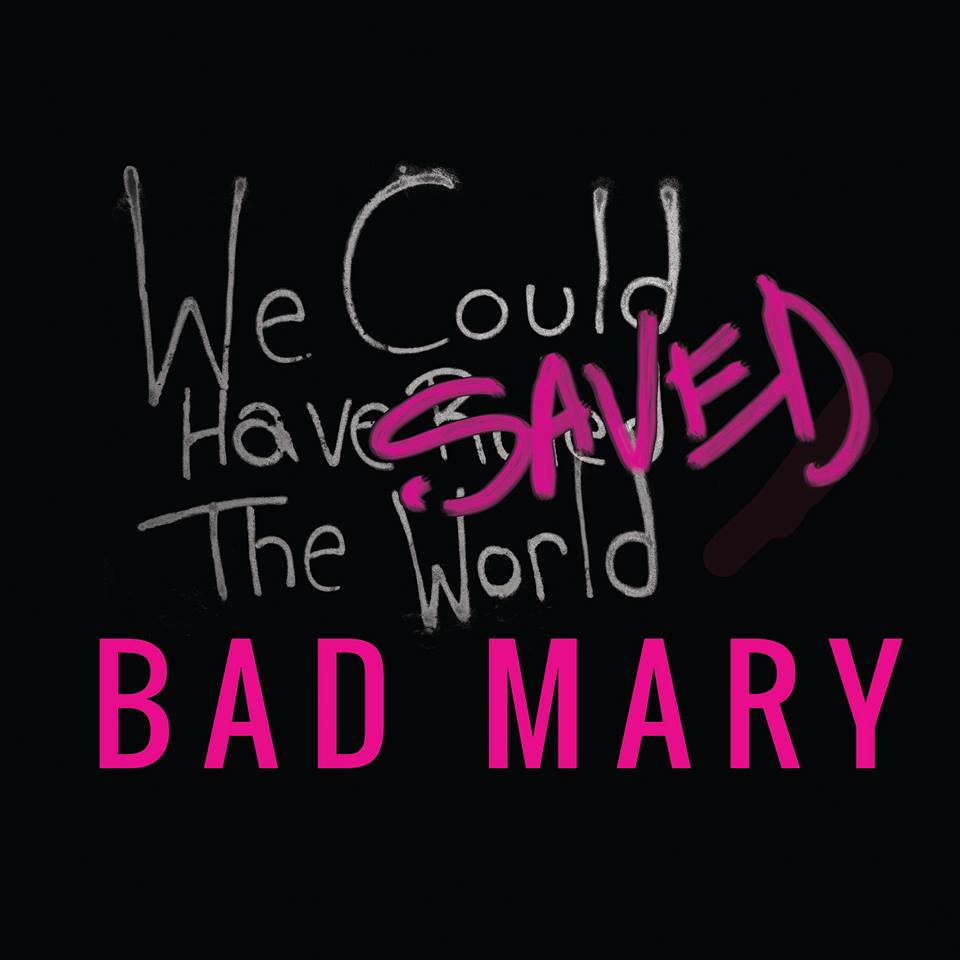 Bad Mary – We Could Have Saved The World – EP Review

Ya gotta know your punk to really ‘get’ Bad Mary. If you’re not okay with a few rough-edges and rough-elbows being thrown-in along the way to the center of their own rock-storm, this will be tougher on you. If you’re all-good with the punk-aspects of freedom & music and how they relate to each other…the wildness…the craziness…the courage to just ‘go for it’ – you know, the standard badge-earning elements of punk – if you find yourself all good with those, then there’s a really good chance you’ll be just fine when it comes to Bad Mary.

If you think about it…punk music should always be a tough listen in some ways; after all, we’re talking about translating one of the thickest, most-defined attitudes of live-music onto a record – and that’s no easy task. Much of what I’ve heard from Bad Mary from this time around as well as when we last reviewed them with their EP Killing Dinosaurs, sounds like this band from Long Island was born to entertain from the stage…ain’t nothing wrong with that! I wouldn’t cop to getting my perspective on Bad Mary right in that last review…there’s a good chance I didn’t quite ‘get it’ myself; while I said everything I could honestly think of on their last EP, I also watched that opinion get slaughtered by endless waves of written support for Bad Mary and their punk-rock tunes…so maybe I didn’t know as much as I thought I did back then, we’ll see!

Admittedly, “Creeper” not only sounds like its managed to harness that electrifying live-energy of the band, but also reflects a more practiced, defined & refined sound for Bad Mary. The four-piece already sounds tighter as they rip into the explosive-nature of their opening tune to We Could Have Saved The World. Lead singer Amanda Mac has always been a firecracker just waiting to explode into wild-entertainment and rock-fury – she’s a captivator for sure…and luckily a lot of the opinion people will have of Bad Mary will be formed through the gripping performances she puts into the vocals. She’s got a wicked attitude…truly fearless…and she can become extremely powerful given the right opportunity. You’ll hear it in moments like around the 1:20 mark of “Marz Attaqx” – and as far as songs on this EP goes, the entire short-length of “Marz Attaqx” is masterfully put together. Not only does Amanda deliver stunning rock-vocals that sound menacing and ready for the pit in front of the stage, but right here in their second tune “Marz Attaqx” you can already hear that there really is another layer of focus applied to these tunes than when last we heard Bad Mary. They’re swinging BIG, meaty, punk-fisted clubs here on “Marz Attaqx” – the pace it moves to will take you for the ride you’re looking for.

Drums & guitars…song-writing and vocals…heck, even the bass-man gets truly into “Trouble!” For all of the songs I’ve heard from Bad Mary so far, this would by far and away be what I’d consider to be their most universally accessible track. “Trouble” boils with all-things-rock – a serious amount of energy is housed in this track and I got nothing but love for the way they’ve structured and assembled this one together. Real dynamics you can sink your teeth into; it’s still punk, but there’s so much more here in this one track that I’d fully recommend you let Bad Mary lead the way and get you all into “Trouble.” With its purposely stuttered and chopped-out guitar, bass & drums – the pulse & pace of “Trouble” is an extreme pleasure to listen to – this song sounds like Bad Mary at their finest to me; the performances are massively confident, bold & committed…and they deliver the goods from an angle you observe from.

“Cloud 9” was probably the contrast to how I felt about the ease of which people would hear “Trouble.” This following tune borrows from the sweetened-ends of rock…Amanda has dialled-back the energy and the attitude a little throughout the first half of “Cloud 9” but she’s not out of this one just yet. It’s a tougher song to really love and get into due to its lethargic energy in the music putting out a slow-grind that does what it does…but doesn’t do much to really put something new into your face. As a result…the vocals in that first-half of “Cloud 9” suffer a little as they try to find their way into a more subtle-rock than Bad Mary typically finds themselves in. All this being said…I’m sure you’ve noticed I’ve cited the ‘first-half’ a couple times already…main reason being that, yep, there’s a second half of complete redemption to follow. As much as I might have question Mac’s performance throughout the beginning of “Cloud 9” – the lady reaches a stunning-power from the 2:50 mark & forward to the end of one of the more unique tunes on We Could Have Saved The World.

With the shortened-length and explosive burst of energy you’ll get from “Meanwhile,” you’ll get the Bad Mary live-show feel to the music once again as they put in quick highlights in at the end of their new record. Using the relentless-pound of the drums from Bill Mac and the grinding-gears of David Henderson’s guitars to their advantage, the energy finds its way back up to where the Bad Mary exists and thrives most securely once “Meanwhile” begins the decent into the final moments of We Could Have Saved The World. Decidedly ending on the strengths that have earned the band the stellar reputation they’ve already nurtured online and onstage, “Meanwhile” grips tightly through the energy of pure-Bad Mary; the final tune “When You Think Of Me” will head into more of a combination of classic-rock-meets-punk energy that combines tones from the old-school into this final blast on the new record.

In comparison to Killing Dinosaurs I think that We Could Have Saved The World continues to show the growth and refinement of the Bad Mary sound. They do what they do well – but in my opinion have also managed to find ways to do it better than they have previously on their records with some of their strongest material showing up here in their latest effort. Clearly working hard, still making sure to not take it all too seriously, and finding ways to continually jam their music with energy from wall-to-wall – Bad Mary is definitely a band that is still on the positive side of the arc of their career, still rising at an intense pace that matches the intensity of their sound, style and approach to music.

Find out more about Bad Mary at their official page at: http://badmary.com/

Tags: Bad Mary EP sleepingbagstudios We Could Have Saved The World