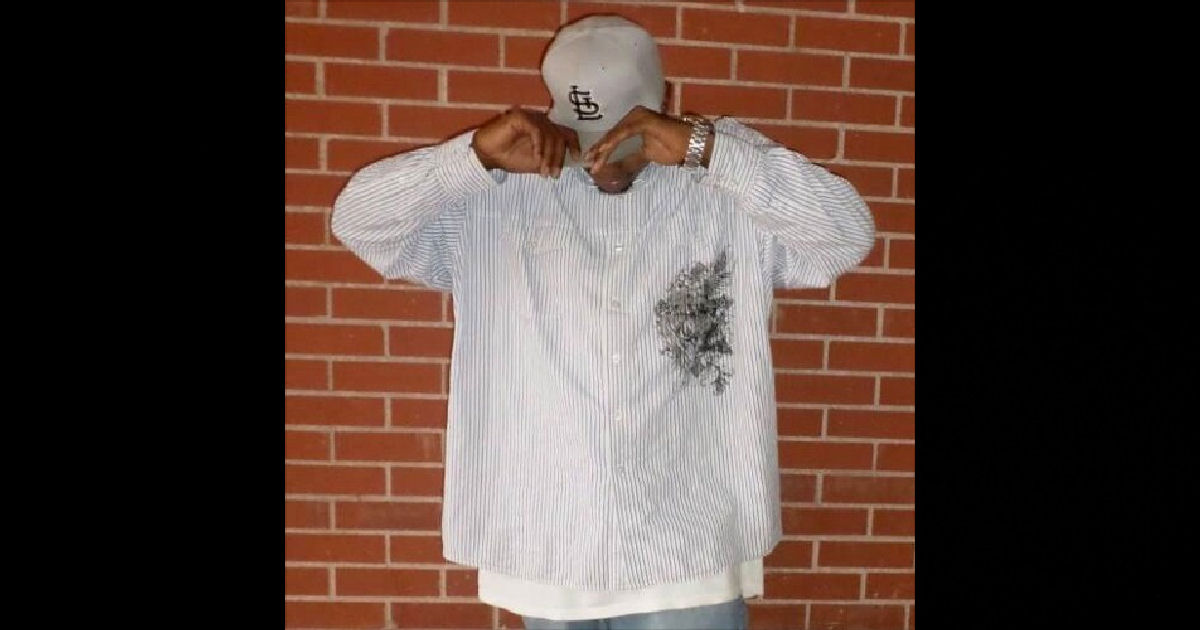 Solid vibes in the empowered anthems and big beats that B. is working with.  Got a handful of singles he’s put out over the past year or so that provide a solid glimpse into what this emcee is all about & the heat that he brings to the bars.  Busting out of St. Louis, this dude is representing the city loud & proud with confident rhymes that stylistically infuse his life experiences with the grit & determination of an artist that’s bold enough to lead the way by example…unafraid to connect to y’all on a personal level, B. writes rhymes that are relatable in all the right ways.  As honest & humble as he is full of style & swagger – B. keeps it real on the mic and spits it real for ya…and ultimately it’s that genuine investment in the sincerity of his approach combined with wildness & unpredictable performances he puts in that’ll catch the people’s attention out there.  We’ve got a couple cuts from about a year back and we’ve got two more from just a couple months ago…and from the sound of things, B. is ready to throw down for real in 2018.  I like checking out tracks this way…you get to hear the evolution of an artist when you get a sample that runs throughout the catalog’s timeline…and I think you can seriously hear it in B.’s music.

Mind you, he started out swinging confidently from moment one as far as this experience is concerned.  “Greater” reaches the furthest back in his catalog time-wise, but as far as the messages of this cut go, they’re timeless and still massively relevant for today.  A cut designed to inspire, B. details what drives him personally on “Greater,” sounding large & in-charge on the mic…smart echo effects & background layers of vocals punching the emphasis into these words…all-in-all, it kind of comes out like its own Rocky anthem, know what I mean?  “Greater” is designed to pump you up, inspire, get you movin’ towards your own goals while giving you the blueprint on how B. took his own life & career to the next level.  Fundamentally, I don’t see how anyone out there wouldn’t connect to the core sentiment driving this tune and how it’s meant to motivate & shake the souls out there through the bold vocals and huge structure of the music supporting the flow & hooks…it has that powerfully uplifting sound that flexes verbal knowledge & insight just as much as it give you something rhythmically on-point & vibrant to listen to.  Perhaps a little dusty production-wise compared to his latest tunes, but nothing that would hinder listening to “Greater” as it is now or affect the looming presence it has…more of a comment on how you can hear that B. has been pushing himself even harder to put the shine into his latest cuts.  Wicked first impression though – I dig the energy of the flow in this rhyme and how it transmits the message of breaking through to that level – B.’s got his sights set on fulfilling his destiny and becoming something even “Greater” than he was yesterday, each and every day – you gotta respect that.

And it ain’t like he doesn’t have his own obstacles to overcome if he’s going to become “Greater” – he’ll go into all that in great detail through the personal tale he relates on “Life Struggles.”  Of the four cuts we’ve got here…hmmm…I’ll say this – it’s probably the beat that’ll need the most assistance in reaching the ears out there through its subtle chill & low-key approach in comparison to the more direct hooks he works with on the other tracks in review – BUT…in my opinion, this might have been my favorite of the bunch.  Don’t get me wrong – you still get hooks, you still get a solid performance that’s every bit as good as the rest, full of that same wild personality and raw charisma on the mic – it’s just the nature of slower-cuts that they often have to fight a bit harder to get heard than a Club banger when it comes to the masses out there.  That being said, to me, this is the kind of writing that seriously lasts & holds up over time…I love a great hook as good as the next, but I’d happily trade a bit of flash & dazzle for the opportunity for an artist to really reach out & connect like B. is doing through the lyrics of “Life Struggles.”  He’s being so impressively real, focused, & committed here – and in my opinion, that’s just B. being himself…it all sounds real because it IS real, you feel me?  You can hear the venom and edge in his tone on “Life Struggles” – and it makes all the difference in the words he’s spittin’ – because to make change or realize your own potential, you HAVE to get a chip on your shoulder to some extent…to get mad enough at the circumstances and situations of life enough to WANT to change them.  Because NEED will get ya there…for a while…it ain’t gonna lead to permanent changes if you’re just trying to make ends meet at the same time – you gotta have that near mental-breakdown that pushes you right to the limit of your convictions to really find out what you’re capable of.  You can hear that it hasn’t always been easy for B. and it might not always be in the future – but the man is determined to give this music thang everything he’s got in effort to avoid self-implosion.  People will connect with this though…like I said, it’s much more chill than the rest, but I think it allows you the opportunity to really consider the words he’s saying here and the powerful lessons he’s providing here.  B. proves that no matter how dark life can get at points, the light can return any time you want to turn it on – that no matter how difficult the “Life Struggles” can be, if you put your mind to it, you can break the cycle.  While the narrative of the storyline on this track doesn’t necessarily confirm that entirely without questioning the possibilities of both success & failure – the fact that he’s there behind the microphone spittin’ this rhyme with such confidence & emotion suggests that this emcee is finding his way through the grind.  Insightful mix of deep personal experience and valid social commentary running through the lyrics of “Life Struggles” – to me, this high degree of realness with your audience is what people are looking for right now…I think this cut is incredibly rewarding to listen to from beginning to end.

I’ll admit, how much I dig what he’s doing in his early tunes made the adjustment to what he’s got goin’ on now tougher than I thought at first.  I still think you get B.’s wicked ability to narrate the storylines in his rhymes and I think the overall production of the latest cuts beats the older ones hands down.  That being said…after the personalized experience of “Life Struggles,” it became harder to accept “My Cannon” at first, because he’s dialing back that personal attachment here and widening the scope into a bigger, more accessible sound overall.  He’s almost got like, a 50 Cent like rhythm & flow to this cut – and believe me, the hooks are stronger than ever & B.’s delivery is as on-point as you’d expect; in many ways, “My Cannon” is one of the easiest cuts he’s got to get into quickly – it’s only by comparison to what we hear in his earlier tunes that this song comes out a bit more surface-level and looking to hook you in through style perhaps more than substance.  Ain’t nothing wrong with that homies – it is what it is – not every track is going to dive as deep as a track like “Life Struggles” will – that’s actually quite rare when it comes right down to it…some songs are written exclusively to turn up and cruise to – and I’d argue that “My Cannon” fits more into that category.  Escapism through big hooks you can’t miss in both the music and vocal-flow, B. puts on a verbal clinic by bringing complexity to the mic so smoothly.  Decent tune all around…I feel like if this was the first impression or first cut I’d heard from B. that I might have come out with a different opinion…we all connect to what we connect to I guess.  I really dig what a masterful grip on the m-i-c that he’s got on “My Cannon” & that this dude’s skill is always on display.

The deep bass and low-end of “The Oath” is incredibly cool to listen to…wild presence in this cut that you can practically feel the sound reach out & grab ya from the speakers.  Another one of the latest, you can hear that B. is still dialing-back the personal details a bit here, but he’s found perhaps a closer balance on “The Oath” than the stylistically flashy “My Cannon.”  The way he raps so slickly, sleekly, & slyly through this final cut in review here, is nothing short of immaculate – that’s personality and character on the mic right there and really finding that perfect match on the mic to fit the entire vibe of the song.  B. can certainly string words together flawlessly…he’s shown that on every track I’ve heard with spot-on metering and precision flow – I think he takes his performance to the next-level here by allowing himself to really get into the vibe of the atmosphere of the music and fit into that low-end sound with tones of his own that come out equally menacing.  As much as I might personally connect to a cut like “Life Struggles” – I can certainly acknowledge that I think as far as his latest tracks are concerned, he really has opened up the potential for his audience…there’s no doubt that B. sounds like he’s at the top of his game on “The Oath” and commanding the mic, he’s killin’ it.  Really smart percussion elements contribute the wild music throughout “The Oath” – it’s honestly a deadly vibe that never quits if you listen close…tough to do that, cause you want to hang on to every word being spit by B. due to the level of seriousness in his tone & gripping way he lets the words rip into the mix, but that’s a good problem to have.  It’s been a great mix of tracks that highlight many dimensions of what this emcee brings to the game; I think B. is one of those artists you can always count of for quality ideas & genuine commitment.

Find out more about B. from his official page at Facebook here:  https://www.facebook.com/grimmreef