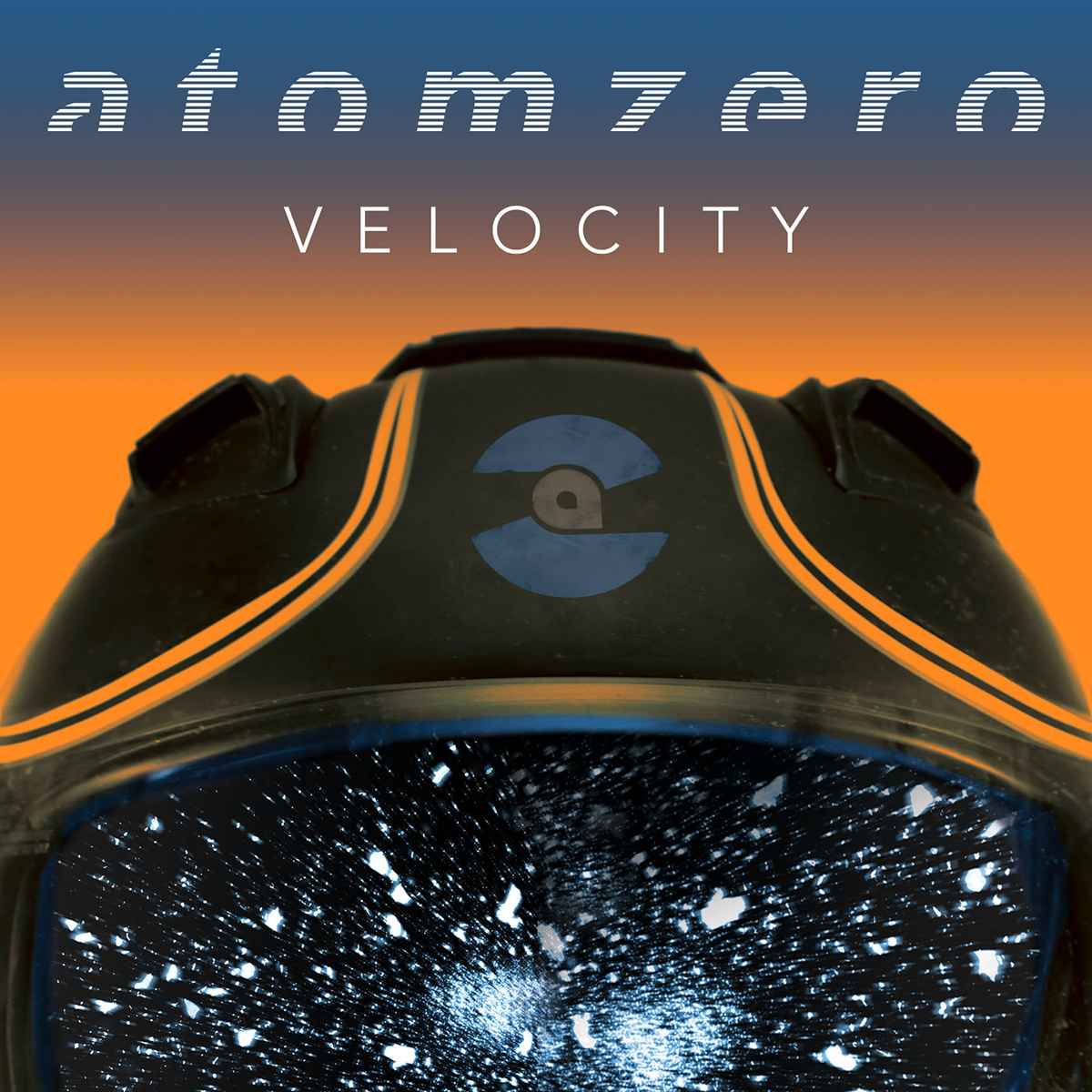 With a storming sound built on a combination that blends industrial & electro with authority and straight-to-yer-face big-beat, low-end-heavy tunes – Atomzero is certainly making no attempt whatsoever to remain a secret on this latest EP, Velocity. Massively processed & produced, dynamic sounds come bouncing from the lefts & rights immediately as the EP begins a wild electro-ride with its stunning opener/title-track “Velocity.” Wicked groove and rhythm dominate this EP’s beginning before bursting open to a chorus that shows respect to the roots of the genre without sounding dated. Really intense pulse and pace to this opening…really sets the tone for Velocity as a whole – Atomzero makes electro-music with a seriously looming presence, born in the shadows & dark-corners of the studio.

“Therapy” is perhaps a little more accessible than its opener. Somewhat borrowing a recipe that has worked for Marilyn Manson in his lighter-moments, musically at least; Atomzero rarely, if ever, goes overboard on the vocals…they find a much better balance and put a subtly-aggressive energy into this second-cut. With its highly-memorable, danceable hook…this is a club-beat in a gothic-disguise…but don’t let the mask fool you – “Therapy” will make you move! Synths charge out from the third-minute with scattered vocal-samples weaving in & out of the music right before Atomzero comes in for their most energetic and in-your-face verse yet – and by doing so, they take this whole song to an entirely new level on its way to the end. Fantastic performance…chaotic but extremely controlled and truly pro in sound.

Slightly…nothing too dramatic…but SLIGHTLY lightening the mood with “Helix,” Atomzero’s sound brightens up just a little more towards the more pop-infused side of electro-industrial. The complexity built into this electro-rhythm is completely wicked, produced & mixed perfectly…and as a vocalist you couldn’t ask for more. “Helix” also helped me figure out who I’d really compare Atomzero to…more in ideals than the way the actual sounds came out…but if anyone out there remembers a guy named Kevin McMahon in a project called Prick, I think you’ll hear what I hear in a comparison to Atomzero. Prick had a devilish style of electro-rock…but the mix was so muddy & dull that it hurt just about every single dynamic of the music on the record in spite of each song deserving of much better treatment. A song like “Helix” and the way it swirls and transforms makes me think of Prick…and how I wish those songs had come out sounding; Atomzero could teach that Prick a thing or two in the studio methinks…

The final original on the Velocity EP, “Towards The Sun,” didn’t quite click with me the way that the other three preceding tracks did. I dig a lot of the moments…more-so to the beginning of this tune; to be truthful this one became a bit much for me by the end. Production-wise, Atomzero gets a MASSIVE beat mixed-into this song…and as awesome as it sounds, it remains constant throughout “Towards The Sun” once it starts with the exception of a few short breaks. Those moments audibly provide a moment of clarity or two before starting up this pounder of a beat once again and getting the gears going from every angle as it begins to rage into the second & a half minute, and from the third minute in, Atomzero fires off every musical-cylinder like a fireworks finale on the 4th of July. I think personally, that the low-end takes over a little too much of this track…I’ll check my sub on this end, but I think the reality of “Towards The Sun” is that the dark takes over the light & bright a little too much for the music to pop as much as it should be on this last original in the set.

“Velocity” gets two additional treatments on this EP at the end. The first being the rubbery-feel that puts a massive-snap into the life of “Velocity” with its “(Huron Gun Remix by Gunmaker)” version; and what you’ll notice most about this remix alongside its new bouncy-form is the massive changes that have been made to the chorus. Nearly muted & muffled – I think it’s a testament to this remix that the chorus still came out huge even though the change in the sound itself was so dramatic. The final version of “Velocity” is the “(Needle Factory Atom Mix)” which is a full-on departure from the original concept more or less and uses the most menacing sounds from the title-track to its advantage in this hypnotic final-rhythm. Both of these tunes really highlight what a remix can be…it’s not always about just cutting up the beat – sometimes it’s all-about rearranging, deconstructing and reconstructing, and I think these two tracks really shine for that reason. The best way I can put it for that ramble to make sense is that there is no way in hell you’ll feel like you listened to the original version of “Velocity” X3 – each of these remixes breathe an entire new-life into the sound & idea and create their own rhythm & groove.

And I’ll admit…when I first saw that “Velocity” in one-way or another was on the EP three times, I got worried. Nothing worse than a six-song EP where you feel like 50% is dominated by a single hook on repeat – but Atomzero proved my intuition to be wrong quite frankly, and served up three variations so radically different from each other and so well-made that I couldn’t possibly pick a version I liked better than the others. I think there’s a real talent here in the instincts and production of Atomzero’s music and it truly shows when they can make a single-song break apart into three completely separate rhythms & grooves. Combine those with the killer original work earlier on in the EP, and you’ve got yourself a fantastic sample of what this electro-wizard is capable of…”Velocity” is a wicked effort.