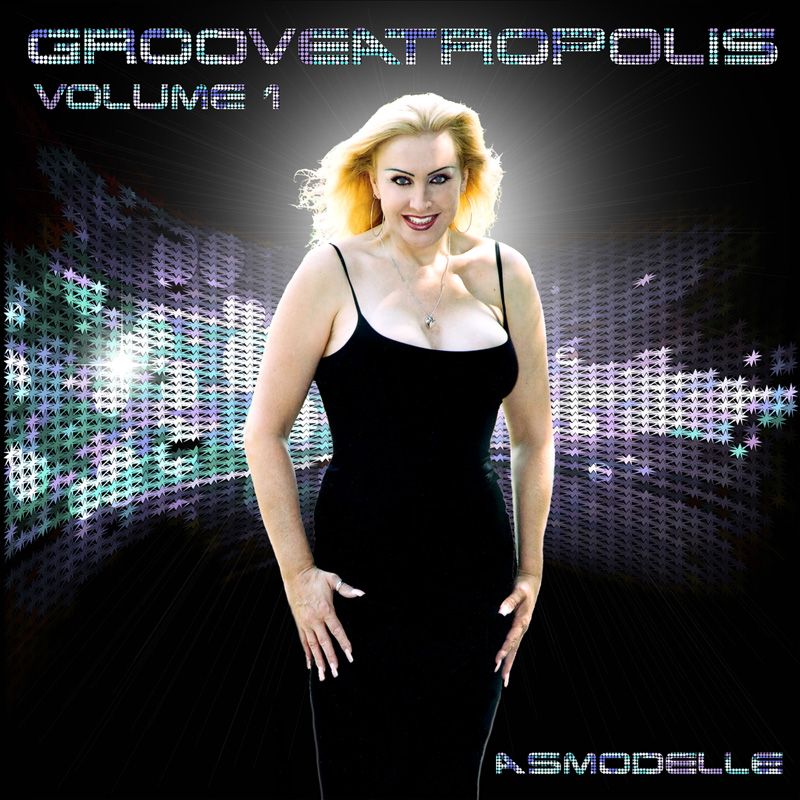 Smooth-electro artist Asmodelle seems to delight in being able to make subtle changes throughout chilled-out beats that make these new songs on her Grooveatropolis record feel like dynamic moments frozen in time. The tracks change like a glacier flows; strong, confident and slowly this set of electro finds rhythms and atmospheres that never take anything too far beyond their hypnotic grooves or descend into a mad frenzy of circuits firing at a million bpm – Asmodelle is comfortable and right at home within her warm & inviting style of EDM.

“If You Knew” starts Grooveatropolis out in this exact spirit or ambient/house EDM minimalism. Though the beat itself is constantly up-tempo, the contrasting electro-elements pull, shift & move this track around making it feel like it’s heading in many directions other than the straight line that it’s actually on. It’s well done…the groove works for sure and I think there are enough changes to keep the ears listening… I think that’s what I mean…or what can be assumed…what are the rules on this genre anyway? How many changes are enough to satisfy – how many elements do there have to be happening before it becomes ‘full enough?’ Of course, there are no rules – at times the songs feel a little sparse or spread out in their space-like atmospheres and at others they find a perfect balance between it all. “Is This Just A Dream” works like that…you’ll notice from the moment it starts that this track feels like it moves around a little more but it does often become noticeable that the tempo itself never changes the dynamics of the song quite enough to bring out one part dramatically from the others before. Normally I’d say a move like that can be risky – but I believe Asmodelle knows her music and her target audience of which would listen; it’s somewhat niche music but I know for a fact that the audience is there and that people love & support this style.

When you look at it from that angle, you want to applaud Asmodelle for finding a way to bring her music to life in her own sound & approach to electro-music. While songs like “Come With Me” begin to find more versatility…the electro-kick is quite pronounced throughout the album and once we get some breaks from it in “Come With Me” I almost found it tougher to return to them after. Songs like “Groove Al Dente” find more success through the added electro rhythms accompanying the beat; that song itself is definitely a highlight on Grooveatropolis Volume 1. Asmodelle turns in a completely solid performance here and allows the music to break & change up a little more…maybe the electro-rhythms are slightly darker before the synth-melodies brighten it up. Whatever her recipe – I think that added layer of light on the darker pulse of “Groove Al Dente” made this a standout track and I also think it marks a significant turn in the album where Asmodelle begins to really get her groove ON.

Cause if we’re talking about hypnotic rhythms that pull you in – “All Tranced Up” is perfect to bring up next! You can almost picture Asmodelle putting this one together, adding each layer and building this song up from scratch – as subtle, chilled-out & true to her style as it remains, this one actually cooks up pretty feverishly in its gentle methods and makes the most out of its eight-plus minutes – if I was her, I would have been STOKED to find this rhythm. Shifting around the sound in captivating ways…”All Tranced Up” heads from the left to the right of your speakers…as low key as all her music remains – there’s no denying the impact of these rhythms.

As if on cue…my wife shouted from the other room – “Hey I like this song!”

I might not be able to tell you much Asmodelle – but I can tell you she damn dislikes every song I’ve ever written…so you’re already ahead of me on the leaderboard of song-writing in her world! That’s not a bad place to be considering everything she likes has a genuine shot of becoming a hit, or is a hit already!

STOP THE PRESS…this is news you need and something that I myself had yet to read…and it’s important to know to be able to understand the full-scope of what Asmodelle is attempting here – I didn’t realize that much of this material is recorded live, on-the-fly…no multi-tracking! You see? A little time spent on these social-media outlets for bands and artists will tell you a great deal sometimes…and when you consider that factor, it really does put a spin on what she’s achieving here on Grooveatropolis. Considering that she’s carrying each and every song from moment one through to the end, and ALL of it with the recording button firmly pressed and ticking away – the moments of sparseness are certainly explainable, but the moments where it all comes together from all angles like in “Your Storybook World” really standout as stunning. You can also hear the confidence that she must have in order to pursue such an effort…tracks like “I’m Fractured” go a long way to prove that she can hold her own from beginning to end, every time. Knowing a fact like live-recording is a huge piece of information that puts this entire album, project & artist right into perspective.

I swear…knowing that, a track like “Your Suspected” becomes all the more sweet. I think I would have loved this deadly-little-dance-number just as much perhaps – this was another real standout for me. Really didn’t mind that pronounced-kick as much throughout this marching beat, this was an example of where I thought that worked probably best for Asmodelle within Grooveatropolis. It’s all so much easier to understand that fully after knowing the context – she’d also be using this directly as her metronome to guide her through each song…it’d be tough to not rely on that directly at times when making changes and switches to the next parts. Again, when considering that – she not only manages to pull this off in subtle ways as these elements drift in & out of the main beats driving the songs – but she truly hasn’t hit a wrong key or note in this entire set. Grooveatropolis might move slowly – but she makes her mark with precision in every song, every time out.

The low-end, menacing synth sound that becomes the driving force in “Taking Chances” sets the stage for a very dynamic set of electro-fusion to come. You can consider me a massive fan of the deadly rhythms dispatched throughout this wild & edgy cut. Like electro-music with a chip on its shoulder and something to prove – “Taking Chances” seems to come straight at you direct with a beat that’s upfront, looming & strong enough to take your lunch money from you. At eight-minutes once again, the song is a long one for sure – but the dark groove is intense and one I still didn’t want to end when it was done.

But as we know, even all good things come to an end…and as “Prance Like A Superstar” begins another round through these speakers I realize that this review has reached the end of the album itself…and that we have to say goodbye to Asmodelle for now…until she comes up with more for us to listen to! Carrying on with the signature metronomic beat that acted as the backbone of these tunes – “Prance Like A Superstar” has plenty of final sparkle through added synth-electro rhythms to raise the roof of Grooveatropolis just that inch higher before our heroic-electress departs, making the final impact of this album a strong one and leave you with a solid groove to send us off.

Definitely music I’d never turn off. While hypnotic rhythms can always tend to let you zone out, relax and drift into the corners of your mind to explore – I also think that’s the intention behind Asmodelle’s music here on Grooveatropolis. I don’t get the sense that even she would feel like the music requires every second of your focused attention – this is music that can fit into almost any part of your day; and my assumption is…as long as you’ve got this album on she’d be happy! You’re bound to drift in and out of the music as per its design…and that’s OK!

The moments where you connect back to it are beautiful ones and Asmodelle always makes you feel welcome through her chilled-out electro-music.

Find out more about Asmodelle at her official page: http://www.estelleasmodelle.com