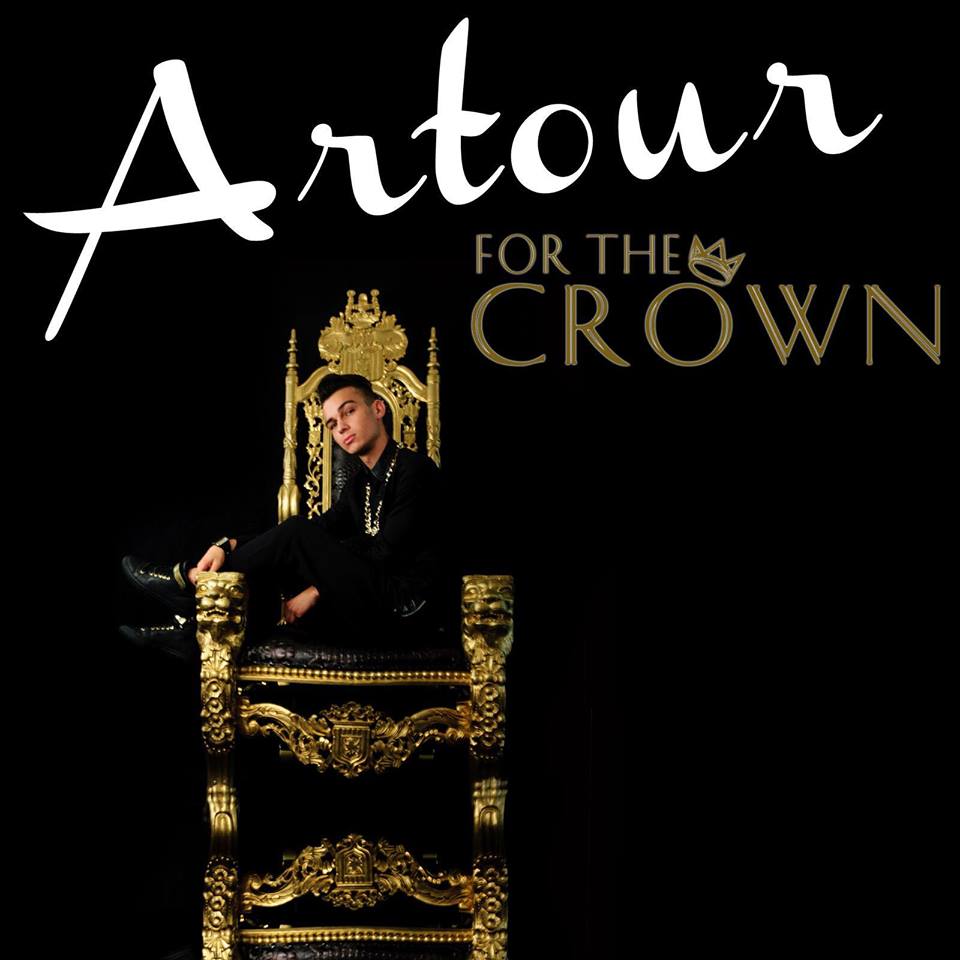 Artour – For The Crown – EP Review

Interesting approach to music from Artour, solo Pop/Dance artist on his new EP For The Crown. Released in the second week of 2016, Artour has already got a solid following latching onto his catchy rhythms and danceable-hooks. There were many hits and few misses as his new seven tracks spun through the playlist here…it sounds as if Artour himself is in a fantastic place right now and truly ready to get his music made, played and out into the world. So here we are.

For myself…I might still be stuck on the very beginning tune, which I fell in love with pretty damn quick. The clever rhythmic way that “It Is What It Is” winds through its verse and chorus – you’ll notice immediately too – this is good stuff! Compared to the songs to follow…in some ways this opening tune could be looked at as a little misleading; it hints slightly at what’s to come, but for the most part is quite a separate rhythm/groove from the rest of the more dance-pop inspired songs. “It Is What It Is” actually finds itself in nearly an indie/rock vibe…almost similar to something Mike Doughty would come up with, who incidentally also has a low-toned voice much like Artour who plays to his strengths soundly on this first track of the new record. Though I know from listening all the way through already that this particular cut is a little more suited to my own personal taste…I doubt you’d come to any other conclusion than I have here; “It Is What It Is” is a solid opening song and first experience with Artour.

“You And Me” is a lot more bouncy…a lot more playful…a little more done than it is new, but not bad. Making great use of background vocals and layers, “You And Me” has an undeniably inviting vibe…and if the idea is to get people dancing with his music, Artour calls this one out direct in the chorus calling you out to the dance-floor. I could see it working potentially…there’s definitely enough hooks in this track to snag the attention of anyone in range…but I also think the energy in Artour’s vocals needs to come up a little to match the real ambition and rubbery-bounce of the music. He performs it well…but this might be one of those spots to think about in the future on how those vocals match the tone & the energy of the music. Compared to the opening tune…he fit that laidback sound of “It Is What It Is” just a bit more than this second tune, in my opinion…and I’d assume that’s largely coming down to the overall tone, atmosphere, mood & melody and the difference between them. My ears tell me that the more chilled-out version of Artour’s music will more than likely suit the tone of his vocals a little better than the up-tempo stuff like “You And Me” will…UNLESS…unless he brings that energy up a little to really give the music a run for its money.

Where things begin to slip a lot more than a little is in “Ready To Go” – a song I’d probably have to argue was the least “Ready To Go” of the entire set of songs on For The Crown. Here’s the thing…Artour is not without ideas…those he certainly has…and clearly he’s still young and looking to define his place in music and his overall sound still…I think that “Ready To Go” showcases both of those things. The hooks could be solid with some firmer execution…this cut sounds like the one Artour wanted to get right the most as the energy in his own performance has come up, but in doing so, the solid tones of his vocals have been sacrificed and there are multiple issues with the metering in the vocal-flow itself. As of right now it sounds a little like Mickey Avalon on a late Friday night trying to jump into the world of dance-pop and wandering through a hook he’s created on the fly. What’s always interesting to me is that…when you listen to the way that Artour has put the other tracks together and how well they work…well…you know he can hear what I hear and that he already knows what’s going to come back in the comments regarding “Ready To Go” – I’m not telling him anything new.

But that’s the thing right? You start a record off with stunning quality and perfect tones and you best believe that your listening audience will be expecting the same from the tracks to follow each and every time. “It Is What It Is” is such a strong opening tune that it set the bar of expectations up high for the hopes of consistency from Artour, but “Ready To Go” might reveal a little bit of that newness in him still. Solid ideas…it’s just more “Ready To Go” back into the studio for a remix and touch-ups than it is ready to be on this record in my opinion. I feel much similarly to “The Beat (Does Love Me)” as well – once again, Artour knows the high-standard he can hit for himself already and that he’s not quite hitting the mark here either through the vocal tones. Once again solid ideas and music with rhythm don’t always make it easy for a singer…just because Artour’s found himself a solid jam on “The Beat (Does Love Me)” – it still didn’t give him an easy time to bring that surrounding vocal-melody to life. The layered vocals…chances are sounds like they’re using an octave/pitch-shifter for a second-layer…and one of those layers is a completely dissonant tone jarring with the actual tone that Artour’s seeking AND creating in the other layer…so…yeah…that’s not gonna work for most – that’s a somewhat grating sound when combined on “The Beat (Does Love Me).” It might love him – but it’s certainly playing hard to get!

“Tonight” brings it closer to what he was able to accomplish early on in the record, but still not quite there. You could look at it and hear it as ‘stylistic delivery’ – but I’m not so sure that’s what Artour himself would want to be labelled as; you can audibly hear that he truly wants to sing these songs well. He’s putting himself right into the moment and giving it his all…and on tracks like “Tonight” you’ll hear how close he probably is to the sound he’s looking to maintain, refine and define as his own. Again…if it wasn’t for “It Is What It Is” revealing his capabilities so early on, we might not question the rest as much…but right now the biggest question on my mind after the comparison between that first song and the rest to follow is; what was the rush? We all listen to music…we all know on & off…we all truly know when we’ve given it our absolute best, or just the best we could do at the time…sometimes time itself doesn’t allow for many takes as life becomes increasingly busy around us all the time. So it’s hard to say…but I’d say that if Artour doesn’t yet have the suits and ties of management breathing down his neck to produce that next hit single by tomorrow morning at 6am…then my advice would be to really step back and listen to where it’s gone perfectly right, and where the bullet needs to be bitten and things need to be redone. “Tonight” could find its way to a much improved life were it to have a few more run-throughs in the studio to get it just perfectly nailed. Never forget…as music-fans, we hear the 95-99% you got RIGHT…as musicians ourselves, we tend to hear the 1-5% we got wrong, or could have done better…that time taken to truly examine the material before release is always important.

Artour pulls it out by the end and puts out one of his strongest tunes right at the end of For The Crown with “Take You There” found in both a ‘Breno Trap Remix’ and ‘Breno Dance Remix’ form. I think they actually both have incredible merit and really highlight just how damn RIGHT Artour can get his music with the right amount of time and focus. THIS is what I want from him! Why? Because he’s CAPABLE! I’ve been saying that from the beginning haven’t I? For real – “Take You There” is an extremely well written tune and a massive highlight here at the end of Artour’s record. I think I might personally prefer the sweeping, enormous, enveloping sounds of the ‘Breno Dance Remix’ of the two…but it’s NEARLY a coin-flip – both of these sparkle and shine with pure beauty and extraordinary hooks and melody.

And I maintain…Artour knows which ones came out perfect and which ones needed a little more work…I’ve said little here that he wouldn’t already know I’m sure. But I’d place a large bet on him really learning from this record on what worked well for him and what might not have…he seems determined and certainly has an understanding of song-writing – and all of this leads me to suspect that the best from Artour is still to come…but most importantly that he’s courageous enough to absorb the feedback and come back ten times as strong on that next time we hear from him. Mark my words – you’ll see!

Check out the For The Crown EP by Artour for yourself right here: https://itunes.apple.com/us/album/for-the-crown/id1074400239