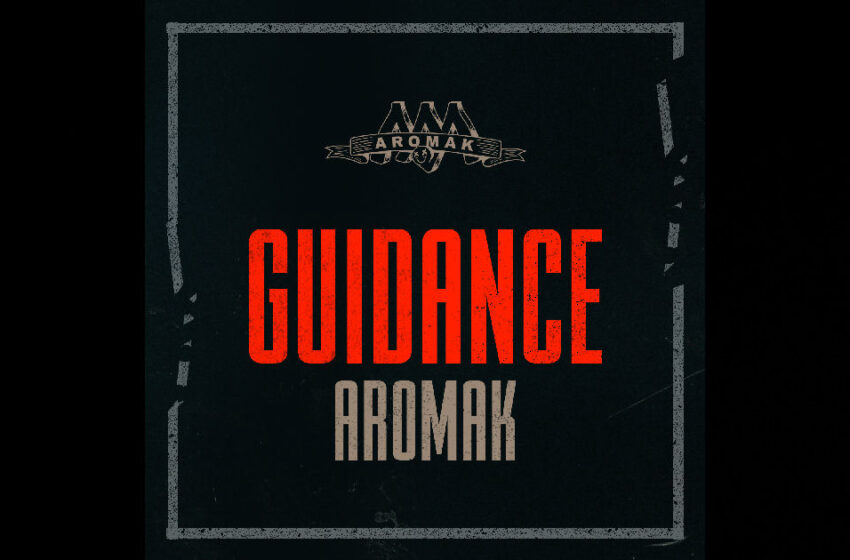 Not too much is known about Aromak from what I can tell…they’re keeping just a few details still hidden at this point, early on into their career.  I’ve been able to figure out that it’s a band with two players that came from different cities…based somewhere out there in Northern Australia…their first release came out back in December of last year, which is this very track right here, a single called “Guidance.”  Other than that…there’s really not a whole lot of information out there yet…but hey man, they’re workin’ on the music part right now…the rest of the details can always come out later, or hey, maybe they won’t.

Either way, as long as I’ve got something new to listen to, you’ll probably never find me complaining much.

The comparison to something akin to Third Eye Blind seems to keep coming to the front of my mind and won’t go away…so that’s a thing…but I feel like there’s a closer comparison that’s currently eluding me – stay tuned, hopefully I’ll figure that out by the end here today.  In the meantime, I can already tell ya I’d much rather listen to Aromak than 3EB every day of the week & twice on Sundays; don’t get me wrong, I like what I’m hearing in this band in their debut, but it’s also a testament to just how much love I don’t have for Third Eye too.  “Guidance” is a great tune when it comes right down to it, really well conceived from start to finish, executed with passion, heart, and tremendous instrumentation in the mix for ya.

The work has been put in, that much is clear.  Aromak has strong vocals, gifted musicianship, smart songwriting, and a focused concept that draws from a wealth of emotionally complex feelings.  Looking for “Guidance” in how to keep on moving forward under the toughest of circumstances…this cut takes a deep dive introspectively in a way that I’m certainly confident a great many of us will easily relate to.  If you’ve ever felt lost in your life, Aromak’s got something here for ya…”Guidance” is all about finding your way back to what’s important & what matters, and summoning the courage to lean on the right advice to help steer you there.  Musically it suits this vibe in the lyricism extremely well, finding that perfect mix of mellow without drifting too far into melancholy, and still finding that extra strength to create an uplifting impact with the melody & conviction you’ll discover in the chorus.  There’s a lot on display for them to work with going forward…particularly, the drums come out spectacular, and filled with emotion & real technique you can hear…it’s so much more than simply playing the beat, this dude, whichever one of the two of Aromak it may be, is crushin’ this single with hits you can genuinely feel.  The guitar solo around the three-minute mark is equally noteworthy…loving what I hear there too.  Vocals-wise, I think the performance is pretty bang-on really, and I like just how much sincerity you’ll find in the tone here…when Aromak is singing about looking for answers & “Guidance,” we feel that too – and quite likely, because deep down, in some way, shape, or form…we’ve all asked for “Guidance” at some point in our lives.  Lyrically, it’s also on really solid ground there too…and when combined with how these words are communicated & expressed through the microphone, it all makes even more of an impact on us when we listen.  Structure is tried, tested, and true…Aromak hasn’t set out to change the landscape of the entire scene in one song, but they’ve definitely got themselves a really well-polished & single-worthy tune, that as a debut, speaks volumes on behalf of what they could go on to create.  If they’re already sounding this good together, this early on…you have to assume that like every artist & band under the sun, they’re just gonna continue to get even better as they evolve and grow – and that’s genuinely exciting.  Heck, I’m excited FOR them…these are some amazing starting blocks to work with.

In terms of advice I could give them, or suggestions on something to change…you know, that whole “Guidance” thing I tend to explore in these reviews…well…I wish I had something valid for them that might help, but my gut instinct tells me that Aromak already knows they’re on the right path and onto something special with what they’ve started here.  So I’m just gonna stand back, listen, and watch this band continue to flourish out there in the scene as the years go by from here…because as far as my ears are concerned, all I’m hearing is a band that’s already dialed in to the vision they have for the sound they want, and all the skills & talent required to achieve it consistently.  If I had any “Guidance” for them, you know I’d be more than willing to share – but the facts are, they’ve already got everything they need in their band, right there between them.  They write & play from the heart…and that matters; it’s already resulted in an endearing single in “Guidance” that’s guaranteed to find them an audience & help secure them a loyal fan-base for the future to come.  Really looking forward to hearing where Aromak will take their music over these next years to follow, and really happy with what they’ve put together on this first impression & debut single of theirs.  I never did figure out which band it was they were reminding me of more than Third Eye Blind…which is tragic, because I shouldn’t leave it at that weak comparison when Aromak is already more impressive…but alas, that is indeed the case & here we are.

That’s on me though, not them – I’m getting old…but thankfully never too old to appreciate a tune like this one.  The only “Guidance” I’ve got for Aromak is to continue to stay the course they’re already on; this sounds completely like the path they were always meant to be on and destined to travel all along.

Find out more about Aromak from their official page at Facebook here:  https://www.facebook.com/AroMakmusic