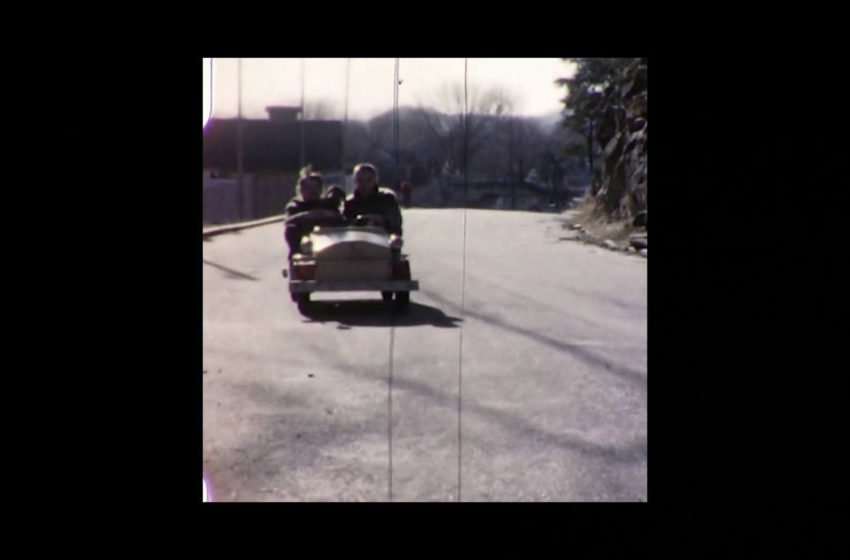 Desire & passion count for a lot when it comes to this music thing.  While creativity can be extremely fickle and come in bursts, when it goes away or burns at a lower heat for a bit, trying to force it all to happen when it comes to music can quite often result in the songs created sounding that way – forced.  In art, life, and music, there is absolutely nothing wrong with taking a break to gain perspective in a time like that – take advantage of it!  Chances are it’ll lead you to new breakthroughs when you come back to the studio…assuming you come back of course.  That’s the key…even the things we most enjoy aren’t always going to be what we love doing most at all times…but in the grand balance of life, those passions we have should always be strong enough to pull us back in willingly.  So I’m all for a break if you can get yourself one – it’s good for the art, good for the soul – Andy Michael is learning all this for himself now; since last we heard from him in 2017, he’s taken a short break from writing.  Now Andy’s back in action with his acoustic, seizing the inspiration at the right time, creating new tunes that continue to show the growth in his evolution as an artist.  When it comes to desire & passion, he’s got much more than most.

Much like the last time we listened to his earlier tunes, here in their raw form, these new four songs all show that Andy’s got something special to contribute to music and the ability to write parts that genuinely connect.  “Way To Love” is a great example in that first shift into the second-half of the verse around the one minute mark…I think that’s right around where Andy seizes the potential of the melody the most and does a great job in singing it with his sweetened signature style.  The idea is on solid ground here…keep in mind I’m listening to a cut with a ‘(rough recording)’ label right beside the title; it’s still early in this song’s lifespan…and I think when the time comes, Andy knows what to do here.  Boost up that confidence & tone in the vocals when the red light in the studio comes on, and in my opinion, give some extra love and punch to the “remember this smile” line on “Way To Love.”  As many times as I listened to this song, I kept coming back to the fact that, yes Andy’s doing a lot of wonderful things here, but that one line really jumps out as a hook of its own as he exits the chorus…best advice I’ve got is to keep playing around with that and finding new ways to continually make that bigger each time it comes up.  Obviously not too gigantic…”Way To Love” is still a gentle & tender acoustic-based tune…I’m not saying Andy should get his Grunge on, I’m just saying that particular lyric in the song serves as its ultimate statement.  Bringing up that intensity in the melody at the end of the chorus in that spot might serve the song really well or enhance that moment, which might provide those spots to drift into an instrumental breakdown or solo afterwards to make an even bigger impact by ramping it up a bit more and then creating that space before the next set of vocals begin.  You can hear that Andy’s got the right spots picked out for it to happen…like I said, I know these are the early stages still…just things to consider is all.  Idea-wise, I think he’s on solid ground with a bright & artistic folk-acoustic sound intact; accessibility-wise…that’s going to depend a lot on his final performance; right now it works on the humble demo-charm it has…but when it comes to studio-time, smoothness to this tune will become key.  There are a couple pivotal moments in this song that hint at something that could end up becoming that unexpectedly powerful soft hit out of left field like “Name” was for the Goo Goo Dolls many years ago.

“Place Like This” has an intimate & isolated sound that’s full of delicate strengths.  I think the guitar melody Andy has found for this song gives the atmosphere that perfect balance of space and sound for his vocals to make a genuine impact.  Once again, I think he’s got his most powerful line coming at the exit of one of the song’s main components, this time from the verse…though the chorus also contains that same piece of the puzzle as well, so I suppose it’s a shared strength…or like, found at the end of each line, how about that?  It’s the strongest part of the melody without question though; but I might examine or experiment with a couple things still before going to do this one for a finalized version.  One thing being the ‘but’ in fact…I might be tempted to remove a few of’em and just leave it as “I am on your side” with a bit of a pause instead, which might help create that sincerity & impact that line is seeking out.  Structurally, I’d probably look at taking that final run through on the chorus down to the most isolated moment of the entire song.  I like how Andy goes bigger on the first chorus before the end (though I know he’ll nail it better in the final version), I’d probably toss in the instrumental section he goes with at the very end, and swap that in between the two final chorus run-throughs instead, finishing it off with the most spare variation of his performance that he could to end this song on the quietest of notes rather than go big twice in a row here.  Might just be the way I’m hearing it…I’m not really complaining as it stands now…I think “Place Like This” is a sweet song that sounds impressively genuine.

Alright…so…”Gentle Love.”  This is a tougher fish to fry for sure.  What I do know is, I held my end of the bargain; I didn’t review this song officially last time around, but checked it out behind the scenes, recommended a few things, and also pledged that I’d remember it due to its uniqueness – and I’ve done that.  The moment “Gentle Love” began, I immediately recognized this song…time-wise, it’s been about a year & a half since I last heard it – that alone should tell you that there are identifiable strengths in this song that truly stand out in a memorable way, and I still believe that’s the case in this updated version.  Andy’s given a more confident vocal performance and resolved a few lyrical issues from what I can tell & what I remember.  “Gentle Love” was released about a year ago technically and the hooks hold up; part of me wonders if he’s ultimately got two songs here…there’s an artistic design to this tune that has its path wandering through the first minute of the intro that…I dunno…I guess I’m just not entirely sure it belongs with the brighter second-half as maybe it’s intended to be.  I dig that a song like “Gentle Love” is more ambitious in that respect…I like that Andy’s challenged himself to create a tune with two distinct dimensions to it…but all that being said, I think the main hooks and what people will remember most about this song all occur past that first minute mark.  Even when he’ll revisit the lyrics from the song’s beginning later on in “Gentle Love,” that seems to be a much more suited fit for the sound he’s going for; there’s artistic merit & bonus points deserved for reaching further with his music in the way this song begins, but the ultimate payoffs become what Andy Michael does after the intro is finished.  Bass tones came out warm & glowing, rhythmic & melodic on this tune – really dig what those add in here.

As short as the idea might be right now at just over two-minutes long, “Sing To Me” takes some really sweet directions.  Lyrically, I think Andy’s done a great job here…vocally, he’s brought the sincerity right to the surface of this song and put in a highlight performance from this set of tunes.  Proving that sometimes it’s those vocalizations surrounding the words that can resonate the strongest with us as listeners, the “La dee da dumm dumm” parts he’s written into this song are a powerful hook.  I dig that he’s got the verses set to a rhythm that almost flows against the grain, yet seems to really belong.  It’s a bit syrupy-sweet when it comes to the words, but they sound like they truly come from the heart on “Sing To Me” and have Andy capitalizing on some of that remarkable potential & magic he can create.  I’d examine that “Can you sing to me?” moment – because that’s spot-on perfect…and it might be a part that he’ll want to bring back later on in the song.  Currently we’re just getting a taste of this newer tune and you can hear from the way it cuts off that there’s more intended to follow…I think there’s still more in this tune for him to use to his advantage as well.  A breakdown with just the “La dee da dumm dumm” parts for a couple bars somewhere perhaps, or the aforementioned “Can you sing to me” in a subtle breakdown/bring-back combo could work out pretty awesome too, in addition to giving his vocals a bit more of a spotlight in some of his best moments on “Sing To Me.”  Green light to this one for sure though, I think he’s found some genuinely captivating moments on this final tune that could become the feature elements of the song in the official mix if he chooses to use’em just right.  Bottom line is, he’s got lots of options when it comes to “Sing To Me,” and the same can be said about Andy’s music overall – he’s continuing to find his way, evolve, and express himself as an artist & there’s a ton of heart, passion, and desire in his attitude towards music…that’s always going to win over the people listening.

Find out more about Andy Michael at Instagram:  https://www.instagram.com/andymichael44