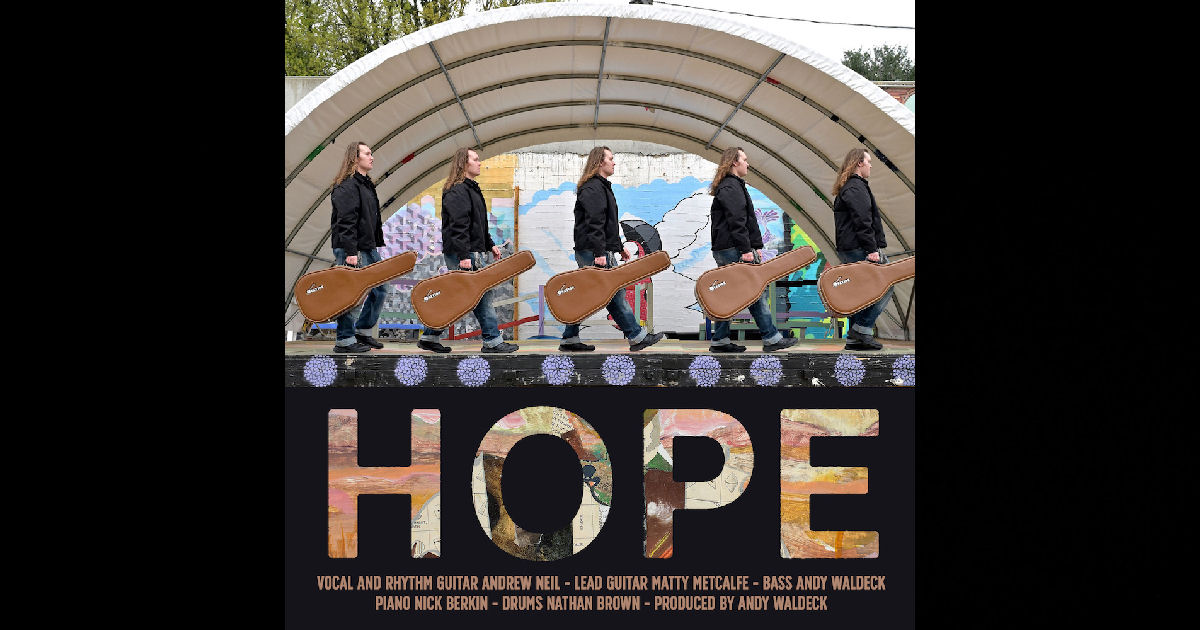 This dude has got a serious gift for composition.

I have a feeling I’ll continue to get more & more attached to this song as summer goes on & I keep on playing this gorgeous drop of sweet audio-sunshine that artist Andrew Neil has got goin’ with “Hope.”  You factor in all the bright vibes & beautiful intentions of this song along with the overall story that exists out there online for the man behind the music, and you’ve pretty much got yourself a top-ten contender on one of them talent-show thingies we all love to watch on TV so much.  Or at least I do.  The point is…or to sum-up the story on his quickly before we dig into his latest single, Neil’s the survivor of a nasty car crash – and through his recovery, he discovered his connection to music.  According to the legend online, he’s gone on to write & record over four-hundred songs since…and I’m guessing that would make “Hope” one of’em!  Word also has it that he’s working hard on his next full-length record as well right now, rumored to be called “Freak” and scheduled to be released this September – and again, I’d hazard a guess that this single “Hope” will be found upon it…or at the very least, I’d recommend it be included if that’s not the plan already.  I’m sure it is…it’s gotta be…there’s a lot of single-worthy sound on “Hope” that’s downright irresistible and it’s definitely an enticing gateway into the music of Andrew Neil – having this tune within any set of songs or playlist is only ever gonna strengthen its effect on ya.

So here’s where I’m at with “Hope” – like I said, lots of things goin’ right here for Andrew, so let’s discuss.  From the standpoint of the structure of the music and the instrumentation – I’m ready to stand behind calling this song pure sonic gold – I think he’s done an absolutely exceptional job with every single note from every instrument we hear.  And that’s no small accomplishment either…drums, bass, guitar, keyboards, vocals…I know he works with other talent surrounding him & studio-aces assisting him in that department, but let’s assume that Andrew’s at the very least got the final say on how everything sounds before it gets put out.  Like any artist would want, I’m sure he gives his nod of approval to the end results of each player’s performance and the process continues on until he’s got all the right ingredients in-play to bring Neil’s vision for the full-scope of the sound & idea vibrantly to life.  Those right pieces are certainly all in the right place when it comes to the flawlessly played & refreshing vibes that come with the spirit of “Hope.”  Highlights for me personally?  Honestly, it all stands out in all the right ways…if I was pinned-down for an answer, I’d probably go with the keyboard melody being the most essential hooks in the music, the guitars being the unsung hero (stunning musicianship there but could use a bump or two upwards in the mix), & the rhythm section is fully locked-down tight, no doubt.

Vocally & lyrically, I wouldn’t say I was at odds with this tune, so much as there was a moment here & there that I either liked enough or completely loved – and the range was fairly widespread between those two measurements.  What I loved, is that “Hope” actually ends up being a person, which I think is an unexpected surprise on that first spin through in comparison to thinking it would likely be about the theme of “Hope” as a feeling.  Which…don’t get me wrong, there’s an aspect or two of that in the lyrics as well for sure.  At the end of the day, “Hope” is a love-song through & through – and I’m never here to rain on someone’s parade when it comes to putting out positive vibes like these into the universe; I appreciate the sweetness and respectful tributary intentions of a track like this one.  Let’s “Hope” Hope hears it…assuming she’s a real person & not fiction of course…based on what I hear in this song and the sincerity in the way the words are written, I’d be willing to bet she is.  Maybe with a name-change, maybe not – but many of these feelings are based on what Andrew likely feels for someone out there!  I think the humbleness & honesty is what makes this whole thing connect as strongly as it does when it comes right down to it.  I wouldn’t be complaining about the way the verses are sung – it’s a strong enough performance for sure…but it’s almost the fact that Andrew’s not trying to be anything he’s not that really makes it enticing to listen to & makes you want to stick with him.  Is it a perfect performance?  No…but it’s seriously close enough that no one should really be lodging complaints, and Andrew holds his own with a confidently melodic approach to the microphone.  Lyrically, I feel the same exact way…there are some brilliant lines, others that draw on imagery we’ve heard in more than half of the love-songs ever written out there…and as a songwriter, that’s where Neil wants to continue to challenge himself in the future…to make sure that each and every word is as unique as the music is.  That being said, in his defense, love is a very relatable thing that we all understand on some level or another…and the way he’s describing it here on “Hope” definitely nails that aspect of creating a song that people will be able to feel in that regard; as in, many of these feelings Andrew describes are ones we’ve felt ourselves, which is likely why many of these words seem so familiar as well…’cause we’ve ‘been there.’

The vocal-flow & melody, the ideas, the composition, and production will all play a giant role in the main hooks of “Hope,” which is where the stakes get raised and this song goes from good to great immediately – and honestly, that was a truly fantastic surprise in listening to this single evolve on those first couple spins.  After enjoying yourself throughout the pleasant vibes of the verses – Neil doesn’t just transition smoothly into the one-word chorus of “Hope” – the dude soars straight in there with an absolutely addictive melody & sound to the tone of his voice – you feel that moment, right in the heart.  And while I’d probably in most cases point to a potential imbalance between the strengths of the song’s main parts in that respect – the fact is, the hooks of this chorus are SO UPLIFTING and SO STRONG and connect so completely & totally, that on the strengths of that one part alone, it’ll win the people over.  What I’m essentially telling ya is…if you end up making it to the chorus, you’ll be as instantly hooked as I’ve become…and there’s no going back from there.  For one single word, it’s amazing sometimes just how impressive an artist can be or how much impact they can make on our hearts & minds – but that’s exactly what Andrew’s pulled off here with “Hope” – that’s an outstanding & memorable moment.  Upon repeat, “Hope” becomes more addictive than I can describe here in words…like, LISTEN to moments around the 1:45 mark of this tune where the music is just CRUSHIN’ IT in all the right ways…LISTEN to the amount of hooks and sparkling sound in the music…LISTEN to the sweet sentiment that runs right through the vocals from the verse and into the blissfully inspired melody that blossoms and blooms in-full through the chorus…LISTEN to how each element of the music is providing sincerely passionate, and complementary layers that are downright required for the magic of “Hope” to exist.  Smart songwriting in many ways, stunning musicianship that can’t be ignored – I’ll remember this tune.

Find out more about Andrew Neil at his official homepage at:  https://www.andrewneilmusic.com