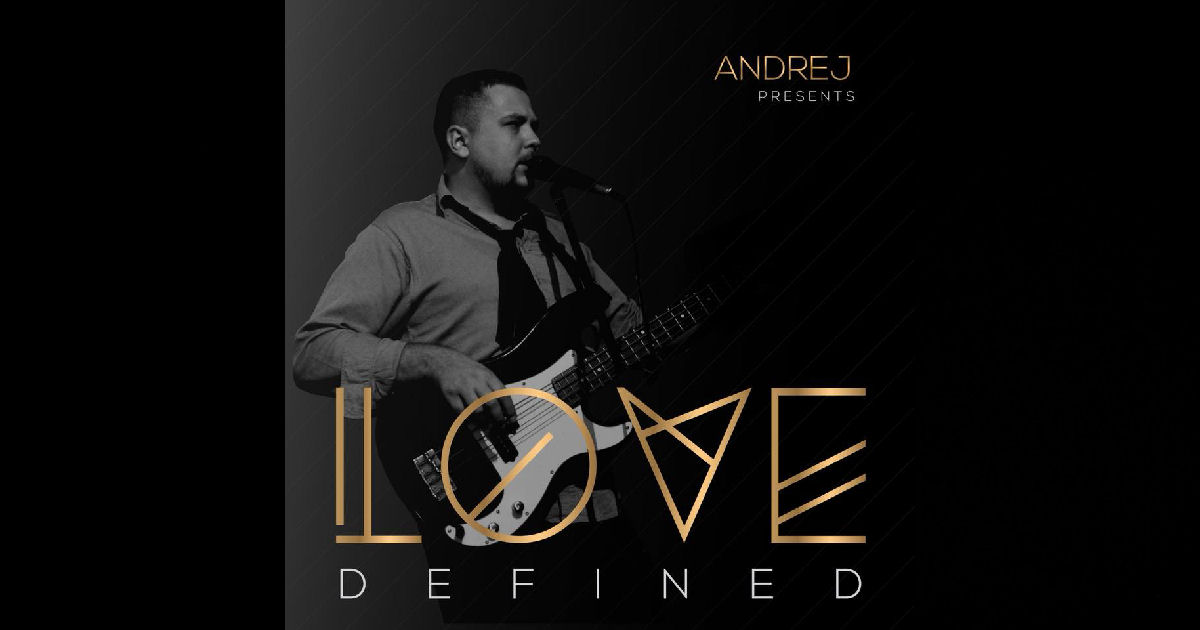 I love getting a set of songs like this.  Not only is ANDREJ based way far away from us here in Canada over where he is in Serbia, but the selection of singles I’ve got here speak a lot on behalf of the strengths in which his music from the past & also to how far he’s come with his career, style, and sound, today.  I’ve got one from four years back, one from three years ago, two from this year that were released about a month or so apart; and either this is a really smart set of singles that have been picked out perfectly in an effort to represent the evolution of ANDREJ’s music, or it just so happens by coincidence that you’ll audibly hear the incredible growth he’s experienced as an artist over the years.  Either way it’s a solid win for your ears when you listen to these tunes according to the timeline of their release – it’d be impossible not to notice that things continually get better & better & better from track to track.

So no points being taken away here…I know you can hear the difference between the quality in the four songs from years ago compared to what he’s doing now – but you’ll hear that ideas, melody, & musicianship-wise, ANDREJ’s been creating solid stuff for quite a while.  “No Girl Like You” is the oldest cut from the set I’ve got here, dating back four years, but still with a sweetness that’ll resonate long beyond where we are now and on into the future.  Almost has an Elvis Costello-like sound to his vocals and the sentiment of “No Girl Like You” is captured well in the lyrics as ANDREJ details the struggles of life & love while keeping the vibe of the music uplifting & impressively sweet.  It’s laid back & tender, accented smartly by keeping the rhythm guitars low in the mix, the bass & drums leading the way, and “No Girl Like You” makes smart use of breakdowns & backing vocals & samples for additional dynamics.  You can hear a bit of apprehension or caution in the approach to the vocals in the chorus…which could be the result of this particular tune being an earlier one found in ANDREJ’s music, or it could be a stylistic choice in an effort to give the song a more humble and endearing sound through a unique approach.  I’ll put it this way…you won’t hear the same things holding him back in his latest single “Love Defined,” which we’ll talk about later on in this review…so I’m probably inclined to going with this is closer to where it all started for ANDREJ rather than the polished sound he’s capable of today.  That being said, I honestly think his performance on “No Girl Like You” ends up working largely in ANDREJ’s favor BECAUSE it’s not fully smoothed out and has that genuine sound of being in the moment.  Another thing worth noting is that while the song itself was produced & recorded officially in 2014, “No Girl Like You” traces back even further than that, originally written back in 2010.  Considering it’s coming up to its ninth birthday next year, it’s still an earnest & sweet ode to heartbreak & redemption in love that proves he’s always been on the right path with his music, and reveals a glimpse of the potential in the melody & instrumentation that you’ll find strengthening even more in ANDREJ’s music over the years to follow.

“Enjoy The Moment” amps me right UP – I love the energy in this cut, 100%.  Noticeably, just about everything improves quality-wise from the music to the vocals to the mix itself – and keep in mind, it was likely only less than a year between this song and “No Girl Like You” being released online.  So as fans, as listeners – we hear rapid evolution like this that fulfills the potential we’d heard before so powerfully and it’s authentically exciting on every level.  The diversity in sound on “Enjoy The Moment” is freakin’ magnificent…the parts that have been written and the way they’re performed are aces all around – structurally, this song continually sends uplifting sounds & good-time vibes pouring through your speakers from the lefts to the rights.  ANDREJ approaches a Weezer-esque like page of the playbook here – he’s got his own sound on the microphone, but musically, structurally, and even melody-wise, he’s making those same smart choices in reaching back towards a classic sound from the golden-age of music while making it riotous & relevant for today.  Tight cut all around…again, I like that at spots like just before the first minute or just past the two-minute mark, ANDREJ has made the choice to not completely round out every corner of his vocals and let a bit of that organic rasp & break in his voice have moments of its own to shine.  I think it speaks to his courage & spirit as a performer – but I also think it’s decisions like this that are the right move to serve the song overall.  When he pours on the slickest parts of his vocal melody, like say around the ninety-second mark…the transition is organic, flawless, and the effect of using multiple techniques and approaches to how he sings, makes an impact.  There’s a genuine brightness that radiates through the atmosphere & sound of “Enjoy The Moment” – and I gotta admit, it’s incredibly addictive in all the right ways – ANDREJ delivers audio-inspiration here.

“It’s My Day” will make use of a truly innovative structure and sweet sound threaded into the music & lyrics in this hybrid tune.  After the break in between the single from three years ago with “Enjoy The Moment,” “It’s My Day” has ANDREJ sounding great in 2018 with the assistance of the songwriting talents of Anni Pea as the lyricist providing the words.  When we talk about fusion in sound as critics – this is hopefully a shining example of what we’re talking about – like I’m almost at a loss for words of my own when it comes to trying to describe just how much ANDREJ & his crew of ace-talent have packed into this one experience.  You can hear the crossover potential exposed like never before on this cut – like for example, “Enjoy The Moment” blends a couple of great elements between Pop & Rock & the Classics at its core – “It’s My Day” takes it that one step further by adding Country, Jazz, Indie, and more into the mix along with all those elements we already loved from the last song, building on where he’s been and taking it forward as an artist.  The breakdown of “It’s My Day” is fantastic – but truly, what isn’t?  ANDREJ makes spectacular use of the melody in the vocals & music on this single, creating a sound that’s bound to appeal to just about everyone out there in some way, shape, or form.  That’s what I’m saying people – that’s how MUCH stuff you’ll find for ya on “It’s My Day” – when I’m saying everyone, that’s what I seriously mean.  This single is like a smorgasbord of sweet, inspired sound, once again capturing that positive spirit in ANDREJ’s style through the words by Anni spot-on.  And in terms of that collaboration between them as far as lyricists/musicians go – that’s exactly what you want as an artist…someone that understands your sound & style like Anni does and can bring that out in the words; as far as my ears are concerned, it’s a strong pairing that definitely produces the desired results.  The verses of this tune reflect the inspirations & influences on the sound of ANDREJ from music’s history, & the chorus of “It’s My Day” has fantastic energy that feels as warm & inviting as a ray of pure sunshine.

Now…you might think I’ve saved the best for last here, but I didn’t – ANDREJ did.  Without question, “Love Defined” is as much of a hit single as a hit single can possibly be and a serious highlight in this set of four that shows just how far he’s come with his music.  There isn’t a remote element of “Love Defined” that hasn’t stepped his game up from every other song I’ve heard here from production to performance.  Vocally, he’s nailing this better than ever with perfect tone and precision punch in the words with all the right soul, emphasis, & energy to make them truly come alive through the speakers with his full personality & talent on display for all to hear.  The words are co-written with Anni Pea once again – and together they deliver a rhythmic ride that fits the meter spot-on and gets the best out of what the music has to offer from part to part.  What’s not to love about this tune?  The verse is excellent to begin with – but that chorus…THAT CHORUS…I mean, that’s just purely bulletproof as it gets right there – fantastic writing with words that really bounce perfectly with the movement of the music and a performance in the vocals that’s colorfully dynamic, expressive, and delivering the supercharged melody this song absolutely deserved.  Think I’m lying to ya?  Go ahead – take the test for yourself and have a listen; I’m willing one spin will be enough to warrant another one real quick from ya, and I guarantee that within two spins, the hooks on “Love Defined” will stick with you everywhere you go from then on.  And like…I mean…good LORD ANDREJ!  It’s seriously amazing moment after amazing moment when it comes to “Love Defined” – I think everything about this song is spectacular, full-stop.  I love that he takes time for the instrumentation to shine – like, LISTEN to the bass solo – but take note, because right from the drop this song drips with skill and oozes smart choices in songwriting from beginning to end.  I love that you can hear there’s nothing holding back ANDREJ on the mic and that he’s absolutely feeling this whole vibe – you can always hear it in a singer when the music has really taken hold of them, and “Love Defined” has the man sounding better than ever before.  I love the adventurous depths that this song will take you into as it heads towards the 2:30 mark and then surges into an Alt-Rock intensity before he BLOWS THE DOORS OPEN one final time, bursting with the powerful hooks of the chorus and adding in brilliant backing vocals to the mix towards the very end.  C’mon people – you can’t possibly ask for more than what ANDREJ is givin’ ya on “Love Defined” – this is what your speakers are craving right here is what this is.  The guitars soar, the vocals are inspired, the songwriting & execution are a flawless match here – on the surface is a song that everyone will enjoy and the deeper you dig from a musician’s perspective, the more you’ll hear adding up to the wild fun & incredible successful results in the sound of this new single.  To me, it’s absolutely crystal clear that ANDREJ has been finding new ways to evolve as an artist and refine his music along the way, challenging himself to be the best version of himself that he could potentially be and raising the stakes for his own creativity as he continued on throughout the years.  It’s also clear to me, after listening to “Love Defined” on repeat as loud as I could get my poor, poor slave of a stereo to go, that all his efforts are certainly paying off – because there’s literally and audibly zero doubt about what a single-worthy and truly memorable moment in time this song really is.

Find out more about ANDREJ at his official page at Facebook here:  https://www.facebook.com/ANDREJSound