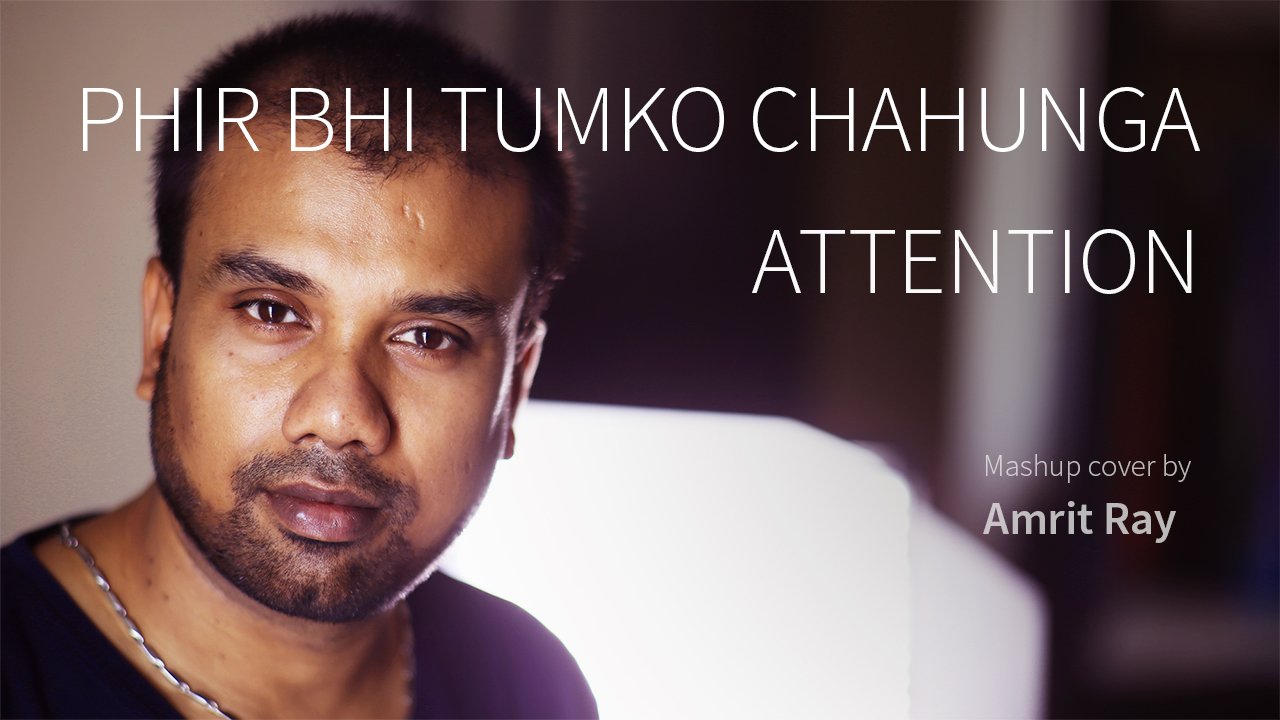 Salute to the humble effort made by Amrit Ray to combine two cultures & styles of music together through his own unique perspective on a mashup between Charlie Puth’s smash hit “Attention” and the equally powerful “Phir Bhi Tumko Chahunga” from the incredibly popular Hindi movie Half Girlfriend.  There’s no question about the starting-blocks that Ray is building with; they’re tried, tested & true – if anything the pressure’s on him to keep the existing greatness in these well-known tunes and still put his own stamp on the ideas as their concepts are blended together in this versatile combination he’s put together.

Incidentally…one of the first things that caught my attention was in the write-up at YouTube at the bottom of the video for this new single.  I was reading it as it played on repeat…and as it turns out, a project like this has been something that Amrit has wanted to accomplish for some time now.  What became even more interesting to me though…is that he himself wishes there might have been a few more takes to choose from – only a few were recorded, so that’s understandable.  That being said…Amrit!  Buddy!  Pal!  WHO is poking you with a sharp stick and making you accept something you’re not 100% happy with?  Poke them back or get’em to leave the room & flip the switches yourself if you have to…as artists we all know what it’s like to hear that 5% we wish we somehow nailed just a bit tighter – know what I mean?  Always take that extra time if you feel like you need it!

That being said…I’m paraphrasing from Ray’s own words and what I’d consider to simply be his own humble perspective on how things have gone on the mashup between “Attention/Phir Bhi Tumko Chahunga.”  He’s put a more modern-day R&B/Club vibe into both songs and I felt like the performance held up solidly enough over repeated listens…in my opinion, no massive reason to not be satisfied with the results of the effort, stuff like this isn’t easy; so don’t be fooled, he’s just being a bit hard on himself!  If anything, maybe the pronounced auto-tuner takes him into a few dissonant tones every once in a while…but that’s always a risk that comes with the rewards of using that in production and major-label artists struggle just as much with the exact same element when they use it too.  It more or less equates to either someone sits down in the editing booth for a year and a half to work on one song, or you have to accept a few slips in tone in trade in order to move on to the next project, song or album – and that’s a trade I can certainly understand making.  So yeah, again…I think he’s just a humble guy making an honest effort here and he’s shown a solid display of creativity in the way he’s threaded these two songs together and into a new atmosphere/sound – he deserves to give himself some credit for a mission accomplished at the very, very least.

He succeeds in the attempt to combine modern-day music with the more traditional Hindi-style, sound & approach in the vocals…as a result of both songs working so well with this particular beat, it comes out rhythmic and memorably different from a TON of what you’ll find out there.  Mashups are still growing in their popularity but of course there are already lots of them that exist – it’s refreshing to hear something that reaches for more like Amrit’s doing by combining cultures and sound like this.  With the massive popularity of the two songs he’s chosen to cover on “Attention/Phir Bhi Tumko Chahunga” – it’s virtually guaranteed to get his name out there; both songs have charted millions upon millions of hits through both originals & cover-versions, so it’s safe to say Amrit Ray’s music will see some of that traffic as a result of smart choices he’s made in what material to use.

That being said…when you know there’s a fantastic chance that a song/video will have a ton of people viewing it, that’s just another solid reason to make sure you get everything exactly the way you want it…right Amrit?  From the look/sound of it he’s definitely got the right pieces in place…still new but increasingly active and putting out new songs throughout this year with really well shot & thought-out videos to match – so if this is where it all starts, he’s doing well…and I’d count on him to get even better.

Find out more about Amrit Ray’s music at the official links below!