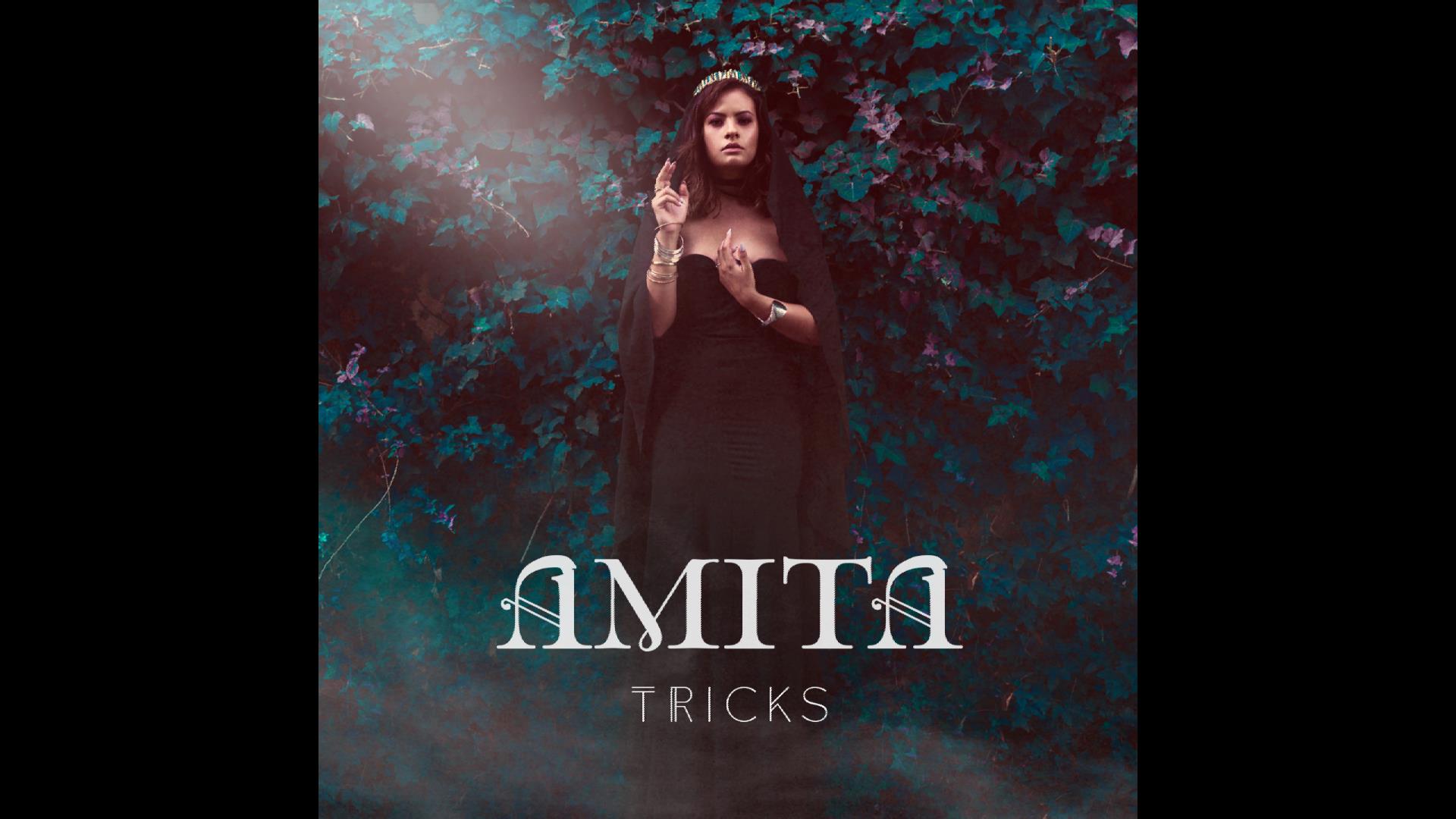 Seriously impressed with this new single from singer/songwriter Amita – not only does “Tricks” sound completely captivating & completely pro – you can also hear the incredible potential that exists for her within music.  Amita has beautifully imaginative ideas and a style that’s built perfectly for right in the here & now…the world should probably brace itself for this artist…if she plays her cards right, she’s absolutely on her way to the mainstream and a long & successful career in music.  Let me tell you why…

Actually…put “Tricks” on for yourself…you’ll hear exactly why that is better than I could ever tell you.

You see?  You hear?  Where doesn’t this fit and who wouldn’t like it?  “Tricks” is about as professional and ready-to-go as you’ll ever hear in an artist or song in my opinion.  Amita puts in a compelling, vibrant, angelic, bold and confident performance on the mic with plenty of melody, style & grace in her tone and approach.  She hits the bars on this cut with the perfect energy and delivery to make every moment shine, displaying much skill and technique along the way that reveals the heart of an artist that’s truly dedicated to the art and wanting to put her very best into each and every moment we hear.  She succeeds beyond expectations here – Amita’s style of Dark Pop has an incredibly widespread appeal that could easily breakdown the barriers with an inviting accessibility that can capture the ears, hearts & minds of many a music-fan both inside and outside of her genre.

For instance…if you’re like me and just learning about Amita’s music and didn’t know what to expect at all…you might hear the first two bars of “Tricks” and think for a brief moment you’re about to head into a track by Nine Inch Nails.  Reznor would be proud of that intro.  Of course, “Tricks” quickly breaks into its main vibe…which is nothing at all like NIN and much more close to something like Sia or Ellie Goulding.  Better yet…regarding the space that exists for Amita in the music-industry…there’s a ton of people out there that wish Frou Frou and Imogen Heap released songs on the regular; but of course, Frou Frou is long over and Imogen Heap is just one artist doing her best to take her style into the mainstream.  Facts are facts – she’s amazing…but she could really use some help…and that might just be where Amita comes in.  When you listen to the clever & insightful way that Amita’s vocals are put together on “Tricks” – it should remind you of the Imogen Heap approach…but you’ll notice as well that the music surrounding her is perhaps much more relevant for today’s mainstream…which is where those pop-instincts/influences of an artist like Sia plays a role in shaping the direction for Amita’s bold hooks.  She sounds immaculately smooth and transitions flawlessly from part to part, verse to chorus and everything in between as she steps into the spotlight to embrace her role as the superstar she truly is.  I have no doubt whatsoever that if Amita continues to make music at this caliber and quality that she’ll find the success she’s after, no matter how she defines it.  She can dream real, real big as far as my ears are concerned – she’s got all the right moves and an incredible sound that could potentially take her to the farthest reaches of her wildest dreams and hopes…because she’s clearly ready as ready can get.

Impressed I am…from wall-to-wall, moment one to the very end, “Tricks” is stockpiled with the sound of an artist that is already at the top of her game.  Amita’s new cut weaves perfectly through R&B, Pop, Electro…it’s a wonderfully dynamic track to listen to that shifts effortlessly through its gears due to the immaculately smooth approach from the song’s main star on the microphone.  The atmosphere in the music is beautiful, misty and melodic…just a hint of mystery and mischief added in with the confident sound & style of Amita’s flowing vocals.  The use of effects and layering in the mix is audible perfection – Amita completely sounds fully in control of every moment, pivoting off the dynamics in the music & knowing exactly where to punch the syllables and tone up that extra percentage to make the impact the words deserve to have.  Detailing life, love, relationships, truth, honesty and the breakdowns that can occur between them – Amita’s made this track a personally-revealing one, but kept it incredibly real.  You get the sense that she may have been burned by love once or twice along the way…but you also get the sense that she’s not about to give up on the concept or pursuit of it as a result of her experiences.

Definitely what I’d consider to be a perfect track…there’s not a thing I’d change about “Tricks” from performance to production.  As far as I’m concerned, Amita is an artist that should see nothing but green lights ahead of her – her time is NOW and this is the perfect time for a sound like hers to exist.  She’s clearly got a fantastic grip on songwriting, she’s a flawless, entertaining and powerful force on the microphone…and from everything you’ll hear on “Tricks” you’ll easily be able to hear the intense level of commitment she has to her music, writing and art.  Not too much a listener could hope for or ask for beyond everything that Amita already puts into “Tricks” – she’s nailed this song in every possible way.

High praise well earned – Amita is absolutely on my radar and should certainly be on yours as well.

Find out more about Amita at her official page at:  www.amitamusic.com