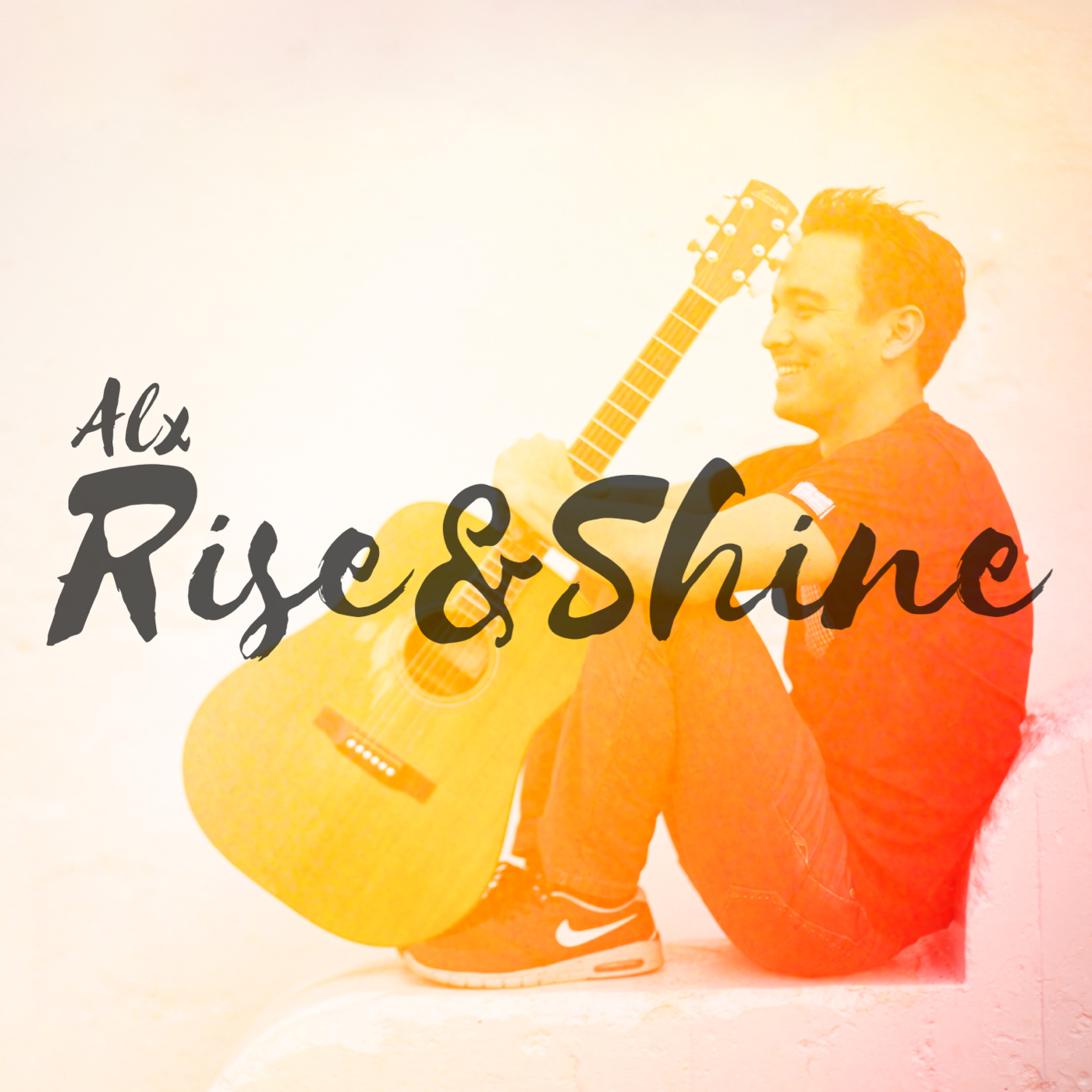 Cool story that follows the music of Alx Kawakami…certainly a respectable one.  I’ll admit to a piece of the bio that caught my eye as I was reading first-off, because you all know I like to form my own opinions – but when I had started “Rise And Shine” the title-track and lead-off tune on Alx’s new record, I was reading about his adventures and came across something that described his music as James Taylor meets Jason Mraz…something to that effect…and honestly, I don’t think I could have pinpointed it so accurately myself.  Perfect description of what I was hearing in the bright, light & sweet tones of “Rise And Shine” – but there was something else I could hear…and it was in ALL of the music I was listening to from Alx.

As it turns out – what I was hearing was also revealed through the backstory of Alx’s journey to making this debut-album.  After spending fifteen years successfully as a musician where he was born and raised in O’ahu, Hawaii – he understood, recognized and found the courage to make the all-important next step towards his dreams…and he moved to Los Angeles with every intention of recording the songs that now make up his album Rise & Shine.  With determination, a lot of passion, skill & heart – this singer/songwriter proves that dreams can come true; no one said it would necessarily be easy, no one said he wouldn’t have to take charge and make them come true himself…but he focused, brought his best out…and truly seized his moment in time.  And THAT…in my opinion at least…is what you can really hear in Alx throughout this record – you can hear a man that knows his time is now…one that has put his very heart & soul into every second of the writing you’ll find on Rise & Shine.

Were it not for the previous fifteen-years of a successful career as a musician – I might have made more of an argument for Alx having to fight the current of what’s happening out there in music, but obviously with proven success like that, there’s no argument to be made.  Of course, the Jason Mraz half of him is close to what’s happening now…he’s got that going for him; as to whether or not the contrasting old-school feel to the writing from the James Taylor side of him will work for all the people out there…harder to say.  I think people that respect great songwriting will get this album…because that’s really what we have here…whether or not it’s in your particular style or not, you gotta respect songs that are written with this much heart and played with this much skill.

Besides…James Taylor couldn’t pull off “Fireknife” like Alx does anyway!  You’ll hear what I’m saying with the slightly old-school textures to the production and overall sound – but at the same time, you’re also going to hear some incredibly inviting and warm writing that welcomes you right in.  For myself personally – it was the verse, build-up and instrumentation of “Fireknife” that sold me…the chorus I didn’t find to quite be as strong.  That being said, “Fireknife” has plenty of personality and great ideas happening…solid backing vocals, great lead from Alx and energetic, rhythmic percussion – and I liked how once the energy started, it never stopped.

BUT…if I had one feeling that wouldn’t go away from listening to “Fireknife” – it was that it felt like it might somehow represent Alx differently than what would most likely be to follow.  “In Your Life” confirmed my hunch quickly – but it also shone a beautiful spotlight on what Alx is like at the core of his songwriting.  As intimate, honest and sparkling as it can get, he’s paired a fantastic string sound alongside twinkling guitar-notes that truly shine throughout the entire song.  Alx sings this song brilliantly – and through the most isolated, intimate performance you’ll hear on the record…he really comes out with a huge win through the small-sounds of “In Your Life.”

“Home” is another solid-checkmark in the win category for Alx and also showcases the versatility of this record – and himself as an artist.  A song like this could find success in modern-day folk/indie, soft-rock, country, pop – you pretty much name a genre besides anything rap/metal and Alx will find a way in there with the strength and flexible-dynamics of writing you’ll find on “Home.”  I really thought this was a highlight in my entire experience with the Rise & Shine album…definitely one of the most ‘realized’ ideas on the record – everything sounds like it comes together like it was meant to be.

For me…that’s the Alx that wins the most…I like the intimate nature of his more tenderized tunes than I do his more up-tempo material like “Other Side Of Love.”  Now…for the record…I think MANY people will actually disagree with me on that…I think there’s a lot of people that will respond quickly to the snazzy & flashy hooks you’ll find on songs like “Fireknife” and “Other Side Of Love” – and there’s nothing wrong with that!  You’re welcome to love what you love about it – just as long as you’re listening!  I think “Other Side Of Love” has a lot working for it…I love the percussion again, I love the like…muted lead-guitar notes (I think that’s what they are?)…and once again you certainly can’t fault Alx for a single thing – it’s just down to personal preference here.  Like I was saying though…as long as you didn’t stumble upon Rise & Shine looking for the new death-metal album of the year – I think Alx stands a great chance of pulling people in to listen.  The hooks and energy of “Other Side Of Love,” especially in its chorus…well…even though it might not have been my own personal favorite, let’s just say I’d support this big-time as being a choice for a lead-single.  There’s a solid blending of rhythms, ideas and energy that really has a strong pull to it…I think there’s serious crossover appeal to a track like this one.

I’ll say this…he writes from an intimate place…but you can tell there are big-big dreams that drive Alx.  Even songs like “Count From Ten” seem to burst with brightness & enthusiasm within what starts as another delicate melody before it unfolds into a charismatic pop-inspired melody that sounds gorgeous once again.  You can tell from these songs that Alx is capable of completely lighting-up any room he enters – an extremely vibrant and charming way of approaching this material that you can tell would sincerely make people smile.  I loved the sincerity of the narrative that runs through “Count From Ten,” seemed like a fantastic recollection & reflection of some of the beautiful memories he’s made along the way.

Showcasing his ability to consistently bring new rhythms and ideas to the table – “I Won’t Wait” is that crossover I was waiting for personally.  I wouldn’t go as far as to say anything written by Alx is particularly dark – but this is certainly a song that’s a different strain from the rest.  I think the rhythm and strengths of the chorus have a widespread appeal and strong hooks…they show that influence of the 80’s on Alx’s music, but he really does bring respect to the sound each time it pops up.  Very clean, very clear in production and sung extremely well, especially those high-parts in the chorus – Alx puts in a fantastic turn on the microphone on “I Won’t Wait.”  I like this moodier style from Alx – but I gotta admit…as soon as the brightness of “I’ll Be Around” began, I was quickly reminded of the sound/style that comes most naturally to this gifted artist.  “I’ll Be Around” sounded like it might have used a filter or effect or two when it came to the chorus vocals…not 100% sure on that, or whether it’s truly needed…but what I really liked about “I’ll Be Around” was the idea at the heart of it all.  The writing and the uplifting chorus – you can absolutely hear that this kind of composition could be easily shopped around all over the place.  Whether Alx continues on his own solo career forever & ever or not – he’s at least got a genuine shot at becoming a very well-known songwriter.  Every one of these songs has had verifiable, strong and identifiable hooks that are pretty much guaranteed to find homes in ears all over.

“Close Your Eyes” is another extremely strong tune for Alx, as he begins to leave behind the ultra-happy tunes for more pensive and thoughtful reflection & emotional material towards the end of Rise & Shine.  His writing often reminds me a bit of Toto with the way he does his background vocals and choruses – this is big stuff…and each track really does possess a magic to it.  “Close Your Eyes” is a perfect example of raising it up to make that chorus full of life, the breakdown intimate and the bring-back inspiring.  If I had a word for Alx and his music…if I had to choose just one…I’d choose ‘consistent.’

And I’d mean it in the best of ways.  I feel like Alx has done a tremendous amount with his own natural talent and instincts guiding him along to what sounds like truly effortless writing…everything sounds like it was written by an artist that really knows their own sound and knows what a hook sounds like for sure.  Big salute to Alx…I feel like it’s pure heart that’s brought him this far – and I think that pure heart of his is bound to connect with many another out there.

If there’s any doubt about that – then listen to the final track “Smile.”  You could argue that it might be written for one and only one person…a confession of love perhaps…and maybe…MAYBE…I’d go with you on that.  BUT!  As usual…a guy like me has theories…and though they might not be correct all the time – but listen to these words for a minute…and ask yourself if it’s not possible…that maybe…just MAYBE…this track was written as a love-song from Alx to ALL of us out there?  I mean…ok ok…there’s a FEW specifics in the lyrics that might point otherwise…but really…isn’t this entire track a reflection of the enormous gratitude that Alx has for where he is today and where he’s come from?  And by ‘always try to make you happy’ or ‘always try to make you smile’ – couldn’t that mean all of us?

From the sound of Rise & Shine to me…I’d say that was potentially truly one of his goals…to put some music out into the world that really offers a bright-spot in your day and a sense of real emotional-relief…to simply make us all “Smile.”  Music to help heal, encourage and inspire us all…because you can really hear his own dreams becoming reality, right on this very album – so he knows firsthand it’s possible if you put your mind & heart to it.  A sound like that is truly a captivating and intoxicating one to listen to – it’s a beautiful thing to hear or see someone get to the place they’re supposed to be.  I’d say the move he made to L.A. was probably one of the greatest decisions that Alx has ever made and I’m confident his music will find the support and love it deserves.

The album officially comes out on August 9th!  Be ready to Rise & Shine with Alx and be the first to get it by finding out more information and more about him at his official homepage:  http://www.alxkawakami.com/