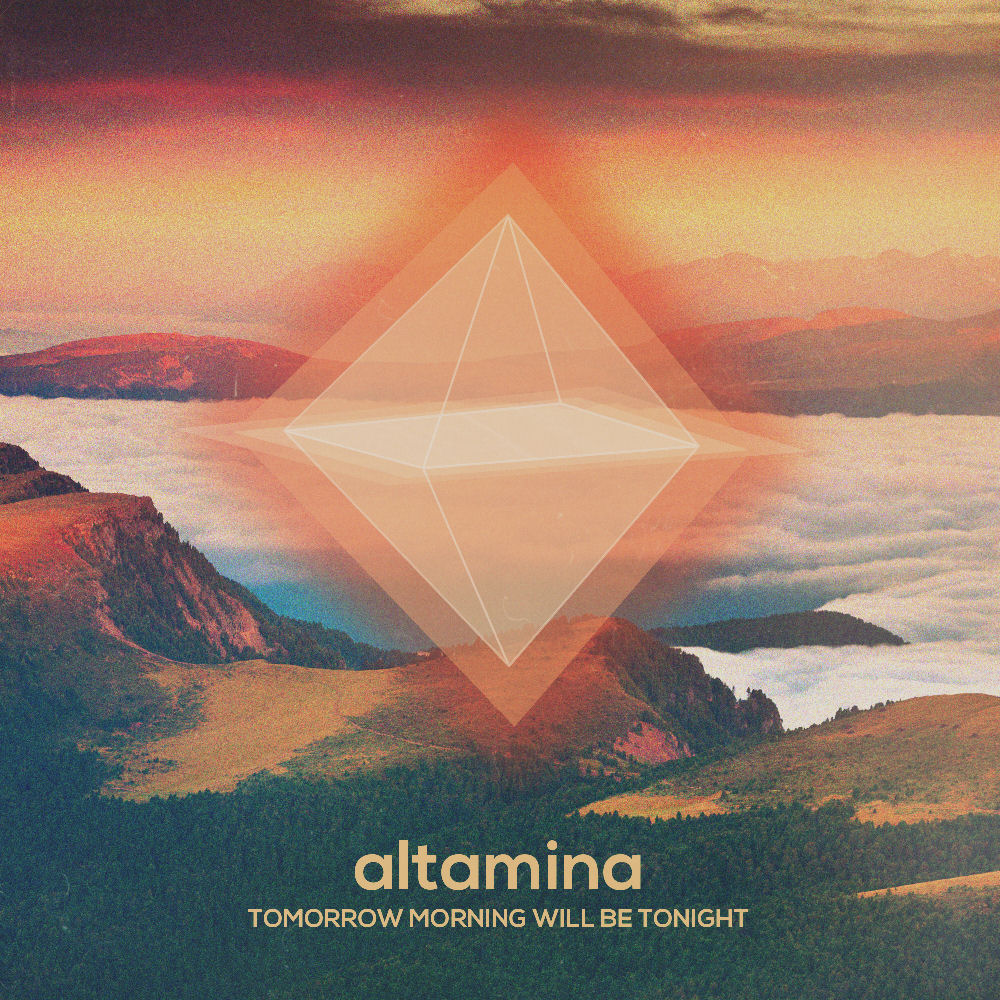 Canadian-based band Altamina has a sound & style that I can definitely identify with.  Very similar to the best songs from The National…the slow ones where each song has a magical part you just wish would go on for forever…Altamina seems to be built of stunning moments like this.  On their new emotionally heavy alt/art-rock album Tomorrow Morning Will Be Tonight, this four-piece from Montreal quickly shows that sincerity in the writing and really feeling the mood & atmosphere of the music is one incredible way to come about making an album that’s truly going to last.  There’s a tremendous, spine-tingling feeling that runs right through the music of this record…and that always tells me that I’m listening to something seriously spectacular – it never lets me down.  Each time Tomorrow Morning Will Be Tonight starts with “Under The Black Sea,” I can’t help but get those shivers down my back…you can hear the depth of the connection this band has to their material, and to each other just from the way this track snaps so tightly together and puts their real & raw emotions right at the forefront of the song.  Great build to the song, powerful emotion, solid performance…all this gives “Under The Black Sea” a checkmark in the win-column quickly as the album begins.

What I really began to enjoy from about the third-minute or so into the next song, called “Telescope” was just how much I could actually hear each player pulling their own weight towards the greater good in the magic they share between them.  “Telescope” starts out well enough; I certainly wouldn’t have complained about it…but even as impressive as the first three minutes were…I was still somewhat on the fence about just how special this was or wasn’t going to end up by the end of this record.  Excellent ideas for the vocal melody fuel the energy of the verse…but it’s after the spacious breakdown that Altamina comes storming back with the most convincing part you’ve heard so far.  Each instrument stands out from keys to drums, to bass & guitar…and the backing vocals sound spectacular on “Telescope.”  So in the end…my ears were judging everything to be as truly special as indeed it was.

“Storm” definitely has that feeling of a structure & sound, rise and build like you’d find in The National.  Though it’s something you can hear certainly from the vocals and from the style of the drumming…the guitars arguably as well…I’m still not railing against this.  Personally I think there’s not enough bands that really explore all that can be done with that style/sound in alt/art-rock music…so I think the door is wide-open for bands like Altamina.  Undeniable for a certainty that a band like The National has blazed the trail that Altamina will ultimately take on and walk themselves – but if a track like “Storm” is any indication whatsoever…it also certainly sounds like that path will be preserved in its pristine condition.  Altamina is taking on, again, my personal favorite parts of the emotion in that style of music and really drawing them out into fully expanded ideas.  “Storm” is proof of that…a song that contains massive crossover appeal and stands out quickly as a highlight early on in the experience.  Love the way the drums are written into this song, excellent fills & rolls fuel that slow-burning intelligent/emotional mix in the music’s performance and writing.  As if the point needed further assistance, the following track “Light” follows much of this same recipe to claim its own victory…but you’ll hear that the music they make is closer to The National than say The Editors.  Similar sounds shared between two out of the three of those bands, but two have really made that sincere connection to the emotion in their writing…and one of them isn’t The Editors, just to give you a hint.  I like that band a lot too…but if we’re talking about how to write real emotion, still have that somewhat montone-frontman and make the music around it not fall flat, I’ll take The National and Altamina’s approach every time.  The authenticity in a track like “Light” really rings through purely here…you can hear each player really connecting to the energy and collectively feeling this melancholy, thought-provoking melody…awesome song, stellar performances all-around once again.

Seriously fantastic & masterful grip that Altamina has on their sound – “Tonight” is all the proof you need of that.  Excellent combination of sounds here…almost like, Explosions In The Sky meets The National here…still has that brooding emotion, but also has the hopeful, inspiring & reassuring guitar-tones to go along with it.  A very pensive track…it steps carefully, but it makes every right move.  Smart background vocals or keys…not quite sure which…but there’s a real magic in the background as well…the slow-stroll through this heavy emotional-raincloud of a song and its first two & a half minutes are ones where the atmosphere sticks right to you…you can feel this song just as much as you can hear it.  The just moments after, it all breaks open and into the beautiful fantastic…gorgeous melody, fantastic drums…great guitars and perfect vocal-flow…not too much of any one thing, and just enough of everything to really make this the perfect experience it becomes.  “Tonight” is one of those moments in music we truly exist for that makes us believe in what we hear…a real highlight on this record of high-caliber material.

The same could be said of the chorus of the following track “Bunkers” – which really has one of the most magical moments I’ve heard in music this year if I’m pressed to name one.  That chorus just absolutely soars with brilliance, the singing is fantastic…so understated, but so beautiful.  “Bunkers” also has excellent backing vocals, incredible atmosphere from the keyboards…maybe even an e-bowed guitar in there too…not quite sure.  The sound is as beautiful as a music-box come to life right in front of your eyes & ears.  Considering the energy-drained way that the song starts…the contrasting uplift of the chorus stands out times-ten…really fantastic melody-line here and a tremendous job of bringing this song to the fully-realized version of the vision it’s become.  From the sound of the lyrics, the song is largely a comment on the safety & security of the everyday life versus seizing the day, the moment, the inspiration, the whatever-it-is-for-you and really going AFTER it all with everything you’ve got.  At least…that’s what I took out of it!  Regardless of if I’m right or wrong, “Bunkers” is one beautiful moment in music that’s truly unforgettable.

A lot of the time, the music of Altamina plays like it has an indie/progressive style to it.  A lot of transitions within the songs…a lot of ideas fully examined, mined and expanded to their full glory…and like a lot of music in those styles, a lot of those most powerful moments come towards the end of the songs…or when you can hear that gear is switched mid-song to a whole new part that had yet to exist.  With many of the songs on Tomorrow Morning Will Be Tonight having this kind of dynamic writing, I felt like I was waiting for that moment to happen in “Follower” and it never did quite come.  I don’t mind the song…it’s certainly inoffensive…but it sounds like it’s missing that same spark or the depth in the hooks that the other songs have all had so far.  As much as the keyboards try their best to lift this one up towards the end, I felt like “Follower” came out a little more flat in its punch & emotion by comparison to the rest of what we’ve heard so far.

“Liability” rights the album back onto course for smooth sailing.  The vocals have the most tone we’ve heard…the most actual ‘singing’ we’ve heard from him so far on the record arguably.  It’s all singing of sorts…but you’d think this was a diva moment for him compared to how much he’s kept the voice from draining the spotlight on this album.  Really taking a moment to embrace the vocal-role just that 10% more – it sounds like you can hear that effort has been made, but it comes through perfectly.  He sings in seriously low-tones, so finding that variation in tone can be a harder thing to do; but here on “Liability” they sound amazing as the slightly lighten-up the tone to brighten up the melody.  Nearly a light psych-rock tune…almost like The Doors meet Pink Floyd here for a moment on “Liability” in the late stages of the record.  Sounds very out-there-in-the-atmosphere, very space-like at points…and I loved the crunch of the distortion on the guitars in the final minute…how you can hear them about to happen, like an audible-threat or promise of what’s to come.

Great relationship between the bass and guitar of “Drifter,” a song where I found the music was the real star.  I like the gentle, inviting sound it has to it…yet, it’s got a bit of the ol’ funk to it as well through those smooth-talkin’ bass-lines…you get a great mix of sounds on this one track.  Almost post-rock through the guitars once again, and somewhat tribal through the drums…the vocals keep it all on the indie-vibe.  “Drifter” wasn’t my favorite tune on the record…it’s a bit awkward but it has some real pull towards the middle of the song with some incredible moments…I think it was the main vocal-rhythm that wasn’t quite doing it for me…but I was digging the rest.

I was pulling for Altamina to find that final-gear to switch into to raise up the ending of this record to the ending it deserved, and they did it; they saved one of their best for last really – “Solstice” is another stunning melody and slow-groove from the Montreal-four.  The vocal-flow to the verse is perfect and has massive hooks in it…the chorus is a truly all-inclusive, inviting sound…an apology of sorts, or at least a move towards acceptance through the words.  Great keyboard work from the midpoint of the song onwards to really brighten the atmosphere and really make the music become an all-encompassing force, enveloping all that listen into the world of Altamina.  I’ll gladly go wherever music like this will take me – I’ve loved this experience with this band, which has been more than positive all the way through.  Big-ups to “Solstice” as the final song…the ending of this record is absolutely spectacular – I don’t think they could have chosen a better song to highlight the best of what they do and really leave the listeners with a memorable melody that’s bound to bring them back to this record again & again.

Find out more about Altamina at their official homepage:  www.altamina.com and support them at Facebook here:  www.facebook.com/altaminamusic