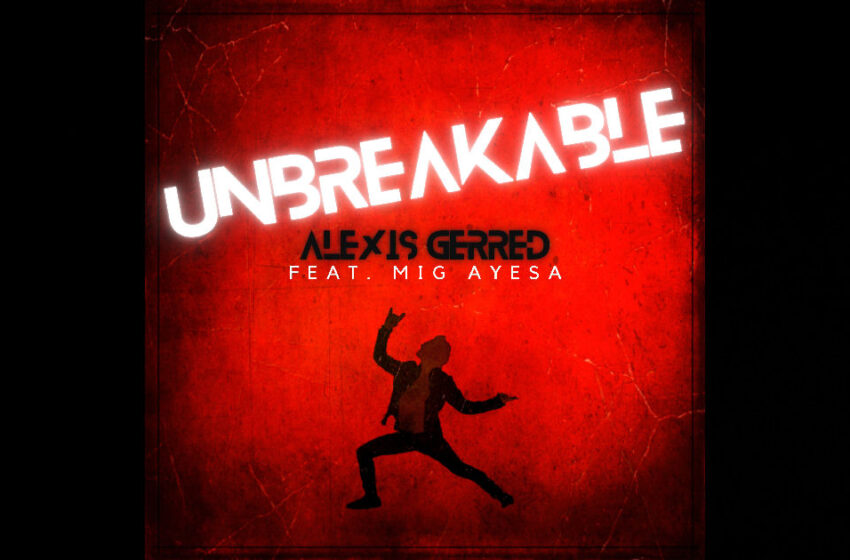 Alrighty…we’ve got one of those crossover artists here in the mix today – Alexis Gerred has already built himself quite the career & reputation in London’s famous West End, rocking the theatre circuit.  That being said, he’s also proven himself in the music realm before this as well, with the release of his album Alexis back in 2018.  According to the notes I’ve got here, “Unbreakable,” his first single since his debut album, comes out officially March 11th this year…and according to the internet, he released a song called “Roads Ahead” in 2021.  So, I guess there’s that.  I ain’t questioning the man’s math…I’m just sayin.’

Anyhow…I’m just here to make sure none of this music you should be listening to ends up slipping through the cracks y’all – and you’re welcome!  Gerred’s got a very BIG single on his hands here with “Unbreakable” – and I mean that in all the most grandiose of ways…it sounds MASSIVE, and right from the very first moments the music starts pumpin’ outta your speakers.  The best way I can probably put it would be to basically recite his resume at ya – this is the kind of song you’d expect to find from not just a seasoned & confident performer, but a genuine entertainer on multiple levels.  Like…here…try this and you’ll see what I mean – close your eyes and listen to “Unbreakable” – you can still SEE it, can’t you?  All the fireworks and pyrotechnics goin’ on…all the lights flashing & sparkly things onstage…the main star of the show givin’ it everything he’s got, just like he does in this recorded version of “Unbreakable” – it’s VIVID y’all…so real you can practically reach out and touch it.  Now…part of that IS because there’s an element of feeling like we’ve seen this movie before in the sense that “Unbreakable” is basically using the formula that works for HUGE Pop/Rock songs & has become interchangeable with modern Country – I’m not here to advocate on behalf of Alexis recreating the wheel, but man-oh-man can this dude sing & entertain!  None of that is in dispute whatsoever – this man was obviously born to be in the spotlight.

As I’ve said many times on these pages of ours, music and songwriting doesn’t always have to be about doing things all that much differently – I’m obviously never opposed to that, but that doesn’t NEED to be what it’s about, every single time.  Believe me when I tell ya, there’s a whole lotta Rock fans out there that just wanna turn up a reliable tune they know they can count on for the energy it provides – and in that respect, you gotta hand it to Alexis & MiG for really knocking it outta the park in the results you hear.  The professionalism and confidence alone are worth the price of admission folks, no lie.  There’s absolutely nothing that’s timid whatsoever about the way they approach their performance on “Unbreakable,” and if you ask me, that’s by far & away one of the most alluring hooks to be found here.  Don’t get me wrong…the verse & chorus are more than solid in that regard too – you’ll get your noticeable rhythm & groove and be able to sing along if ya wanna…I’m talking more about the intangible hooks that never get as much credit as they should…things like the charisma and personality that Alexis supplies to “Unbreakable.”  WILD guitar solo…fantastic energy…vocals as on-point & impressive as you’d wanna hear on a song as gigantic as this one is…I’m really not hearing anything to complain about.  It’s a shiny, shiny tune…tons of flash, tons of flair…sure we could argue about how much of Alexis is really IN a song like this if we wanted to go that route…but again, not every song needs to be so mired in personal depth that we drown in it.  Sometimes a little goes a long, long way…I think in that regard, again, Alexis has played this as smart as its been written; it’s a very hard style of music to connect in that profoundly personal way…songs like “Unbreakable” have a positive core message yes, but let’s be real here too – this is built for entertainment and designed to be turned UP…fireworks, pyrotechnics…all that fun stuff.

So…yeah…let’s not get it twisted here eh?  I dig what Alexis has got goin’ on and how he’s hit the mark of his intentions to the nth degree.  I listen to a song like “Unbreakable” and above all things perhaps, even with a LARGE as the sound of this tune can truly be, what hits me the most is just how ready for the moment that Alexis genuinely IS.  This ain’t some kind of tune that shows three years of rust that formed in between his debut album & now – this is the kind of song that confirms all the hard work he’s been putting in behind the scenes is completely paying off.  I honestly can’t imagine any set of functioning ears out there hearing “Unbreakable” and not coming to the conclusion that Alexis Gerred is built of pure professionalism & real all-star talent…it’s that apparent that no one could possibly miss it.

That’s my two cents on this subject – anyone out there feel like two more?  Because I MIGHT just have an insight into the future of what’s happening with the music of Alexis as well…and I kinda feel inclined to share if I’m being truthful with ya.  The page I’m listening to “Unbreakable” on…it’s one of those kinda like…half press release/half click, see & hear stuff type-dealios that we music journalists & critics end up with access to from who knows where all of the time…a press kit!  One of those things.  Anyhow…if you’re paying close attention, sometimes you can find a few bonus goodies lyin’ around.  So while I’m here tellin’ ya that, yes, Alexis has an ENORMOUS new single that a whole lotta you are sure to love…what I’m hearing in this song called “Mary Go Round” that seems to be the ONLY other cut that plays after on this page dedicated specifically to Gerred’s music…is very much exciting to me, yes indeed.  I’m not here to talk about that song right now though, so you didn’t hear it from me that I think it’s the better of the two tunes I’ve heard from Alexis…but you can quote me on saying that I think he’s in for a great year with his music.

Find out more about Alexis Gerred at his official website at:  http://www.alexisgerred.co.uk