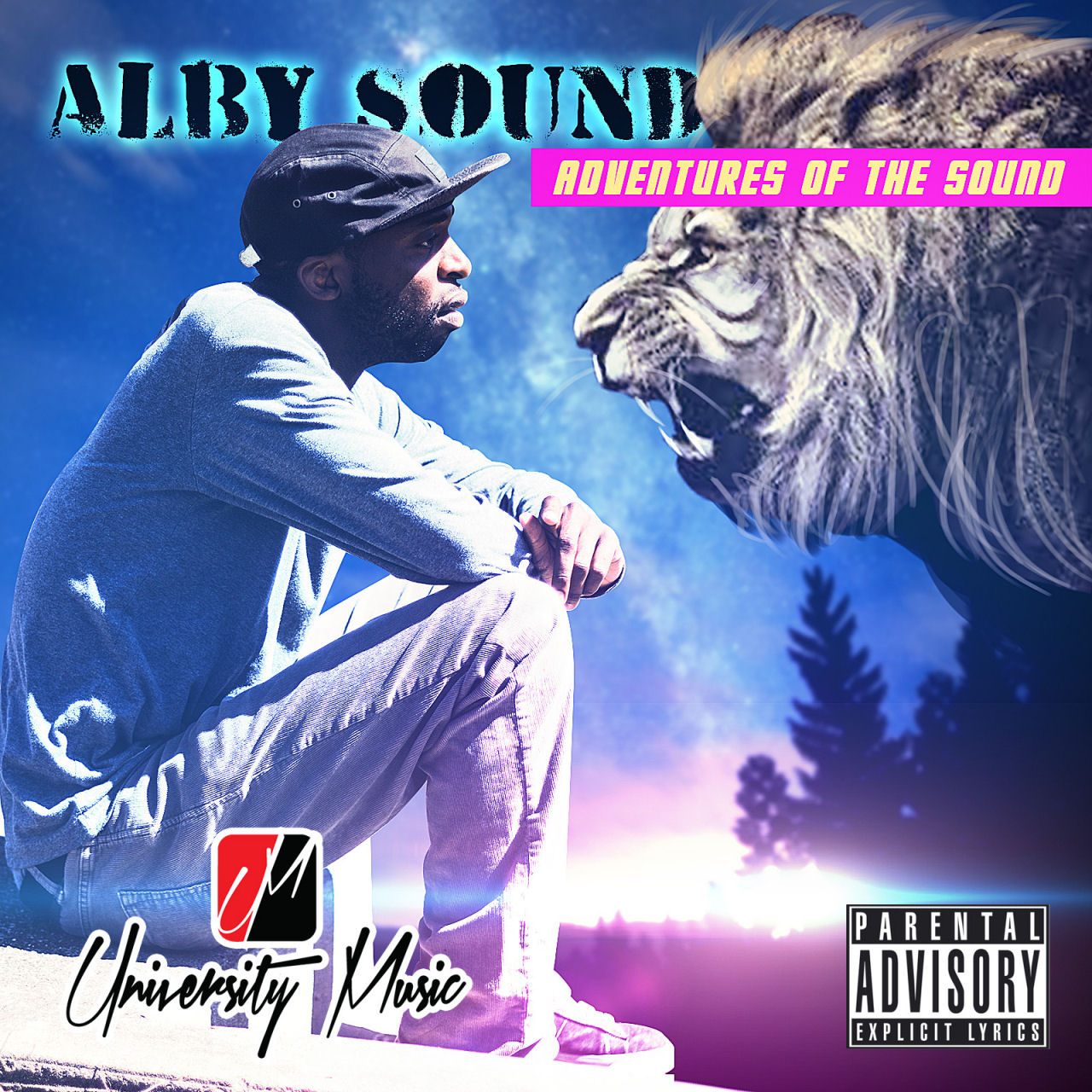 We’ve actually known about the music of Alby Sound existing for quite some time. Way back in our early days, nearly two-years ago or perhaps even more now, we uncovered the music of Oktayne; that was the moniker this emcee was going by before discovering a whole bunch of other rappers, bands and artists all shared the Oktayne name. Pursuing his uniqueness and taking time to refine his sound, separate the two from each other and create a new energy as Alby Sound…it’s been a long time coming…but here it is, the Adventures Of Sound.

The man behind the rhymes has always known his way around a flow, beat & hook. Starting strong & smooth with “Origins Of Alby” and an old-school vibe to the rhythm & flow…just the right amount of low-end and magic to the music to make it standout while Alby Sound rhymes quickly overtop of the beat. Good pace to the metering…it all sounds on-track right away as we get the origin-story to Alby Sound and the key-insight into what drives him forward to success.

Demonstrating that further as the hooks get deeper, he finds winning combos in “WLGYL” with assistance from fellow-homie Takticz who steps-in for a sick verse, and also on the up-tempo, jazzy-sounding “Clap Your Hands” where Alby Sound shines brighter in the verse and right into the music. I thought if anything, maybe a little more energy into the actual chorus-hook through the vocals, but I’m not complaining; “Clap Your Hands” is certainly a winner for AS and a very unique sound in his catalogue so far as I’ve heard.

Raising up the aggression and stepping up their presence in the music, Alby Sound & Kareless MF’ah rip through verse-after-verse impressively with sick-energy that rises up to the pent-up venom in the lyrics. Definitely a track that pounds-out with extreme authority and really digs in through mean, meaty-hooks – but even still throughout the more menacing atmosphere, Alby Sound has done due-diligence to his personal-style and slipped-in positive messages of change and social-evolution. The man works hard at what he does…which is why the overall quality of performance and production of Adventures Of Sound has come out so much more evolved than his first record way-back-when as Oktayne. He’s breaking loose and hitting the mic with more confidence than ever…maybe not as much sleep mind-you, as he’ll explain on the “Get Hype Interlude” before ripping it up with the full-on like he’s been ready to rock for hours and explodes all over “Get Hype.” Definitely one of his best…tight, innovative beat that comes out brightly through the effects and the beat is crisp as fresh, cold-winter air first thing in the morning. Alby Sound brings up his energy on the mic to a solid-level where the tone is confident and the performance bounces alongside the beat that pulses and pops in behind him.

Overall, it’s on tracks like “Get Hype” that you can really hear how much more focused he is today in his music than where he’s come from. The words all fit…nothing sounds like it’s trying to be something it’s not…authentically, Alby Sound is getting right the fuck down on “Get Hype” – completely solid cut. Carrying on the intensity into “Friends” and raising-up the drama/emotional-intensity as Alby Sounds takes the chip on his shoulder public. Lashing-out verbally through slick lyrical-combinations and a big low-end beat that looms large over the track…it’s a thugged-out back-alley beat that contains a smart underlying melody that makes the music work incredibly well; great mix on Alby’s vocals…solid-stuff for this emcee right towards the middle of Adventures Of Sound.

But truly, for me…I think it’s definitely been about tracks like “Clap Your Hands,” “Get Hype” and “Vibe N’Ride” for their old-school bump & grind and jazzy-additions to the music & beat. “Vibe N’Ride” is fully of smooth saxophone samples and gentle piano keys all cut, edited & sharp to the beat, as is Alby Sound as he busts his rhyme with a perfect snap to his vocal-flow that pulses right along with the beat in the music. Another solid hook…AS has certainly raised his game up on this new album, no doubt.

There’s an honesty to this record that I can say with certainty you won’t find on any other. What I’m talking about is what you find on the “Crank It Up Interlude” – Alby Sound takes us into his personal-list of crushes from TV shows from back in the day. You won’t find that anywhere else I’m telling ya! And I’m also in agreement on the subject of Topanga…he’s dead-on, ‘nuff said.

“Crank It Up” takes the vibe back to a more hard-edged & serious flow. Creative music-samples swirl together in an electro-synth combo that is also unique to the rest of the album as Alby Sound mixes it all up once again. With swagger & attitude dripping from the words he spits into the microphone, he switches between jokes & being-serious while also making sure the hooks are in-check. Once again, they definitely are…he’s found a memorable rhythm in the chorus hook that will definitely stick with ya.

El-Merow steps in to assist AS on “Unlock” – another tune I was highly impressed with on Adventures Of Sound. The vocals come out ultra-smooth as Alby Sound kicks off the opening verse into this bright-electro-influenced tune. With a rubbery bass-line and clever percussion…Alby winds & weaves his lyrics cleverly with a professional approach & balance to his rhythm & flow that really stands-out on “Unlock.” Definitely some of his best at work right here once again, he sounds right at home on this cut & in the moment doing his thang…some of the best music on the album as well – “Unlock” is a wicked cut.

But sometimes that smoothness can get you into trouble. Lady trouble. Alby Sound brings out the lover and puts away the fighter inside him for a moment to let the ladies know what he’s all about on “Situation.” And ummm…hmmmm…okay…well…I’ll say it like this; if there’s ANY confusion about what he’s expressing through the lyrics…well then ladies you ain’t listening right. He’s putting it all right out there for you…I don’t think there’s any mixing his message in “Situation” – that’s an invitation to you fine-ladies out there…Alby Sound is calling…this track is all the proof you need of that and an extremely-detailed description of what you’d be getting in return!

Takticz shows up once again towards the end of Adventures Of Sound on “Chillin.” I really dig this guy’s flow and the way he rhymes…definitely get why Alby Sound wanted him to drop by. As he starts-up “Chillin” the song glides along with one of the more subtle-beats providing the atmosphere with bright, ice-like key-sounds contrasting with the dark, pensive-vibe on this tune. Alby comes in towards the end to take this track home amongst its smart-edits & cuts mixing-up the lyrics along the way – it’s a great idea and he uses it minimally for maximum effect.

You hear this guy a little clearer when he’s really got something to say…and I think a track like “Grow Up” really reflects that. He sounds more connected to this cut than a few of the rest, if you know what I mean…he’s LIVED this song, and you can tell. Excellent choice of sample to put alongside this rhyme; using saxophone & a minimal beat & piano to drive the rhymes forward, the atmosphere is a thoughtful-one surrounding “Grow Up.” I dig its extra-personal vibe to it…another one of my favourites from this record for sure.

He’s been putting this album together for a while now…and I think that extra time, care & attention in handling the beats & rhymes on Adventures Of Sound has paid off well for Alby Sound. Right down to the ending with “Racing Division” – AS has shown a versatility on this record that reflects his maturity and versatility as an artist on the rise. It’s all starting to come together extremely well for this guy – his messages and lyrics are coming across clearly, confidently and direct…the music is wildly exotic & innovative with plenty of diversity and vitality to the rhythms. He’s done great work here…music that shows that hard-work and focus lead to big-beats and a whole new level of creativity.

Be sure to check out our next episodes of SBS Live This Week when we put out a double on Nov. 17th – we’ll be putting the spotlight on Alby Sound’s music and getting down on a whole new-look to begin our fourth year!  Until then – find out more at the Alby Sound Facebook page here:  https://www.facebook.com/albysoundoff