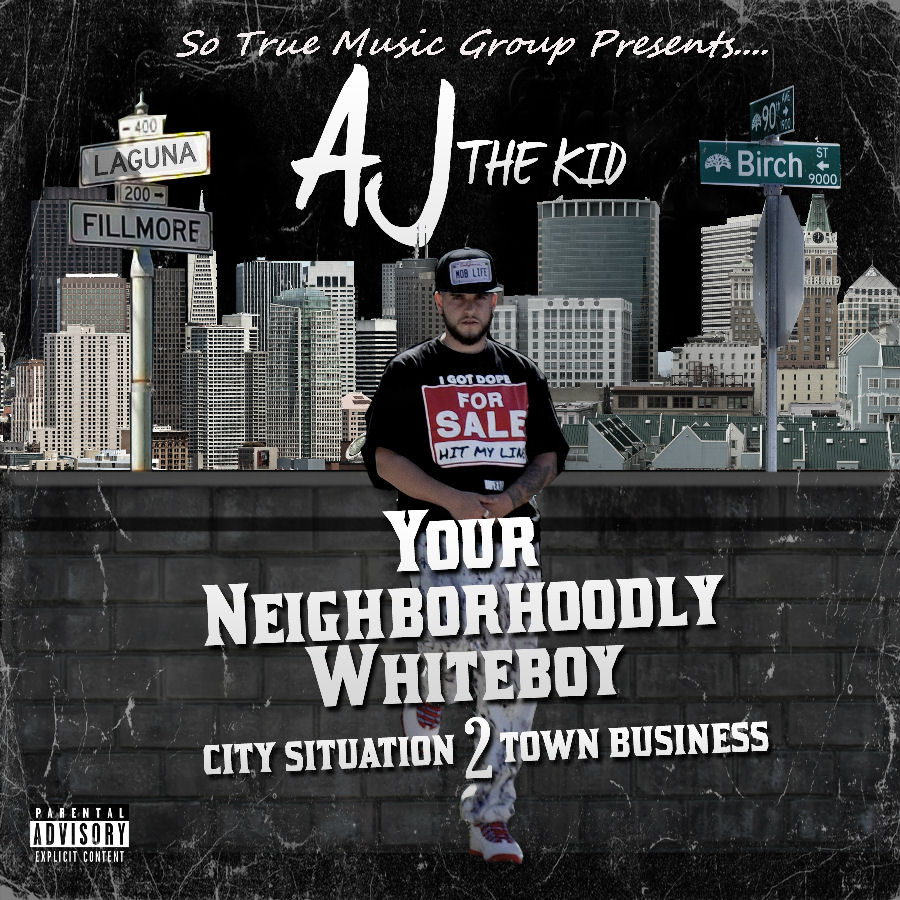 If you were up on your latest episode of the SBS Podcast during the main-site’s downtime while we refreshed our entire website’s design – you’ll have heard a sample of AJTheKid during the show.  We played a cut from Your Neighborhoodly Whiteboy called “Mob Anywhere” from his new five-song EP…and I was quick to point out just how potentially marketable the entire idea could possibly be.  AJTheKid has got some solid ideas…and best yet…the guy’s not frontin’ an image that makes no damn sense – this angle makes sense, and the man keeps it plenty real through his lyrics over the new course of the new EP.

He knows where he comes from and he knows what he’s all about – and between these two important factors, AJTheKid is able to take these rhymes to a level of believability through the sound of conviction in his voice.  His rhymes have equal parts humor and seriousness – he’s got great observations and perspective on life that he expresses really well through the lyrics on these five new cuts.

“Froze Like A Manican” – which starts the EP, might either be a bizarre spelling-error or a new buzz-word…heck if I know, I’m way too old for that stuff now.  In either event, Your Neighborhoodly Whiteboy quickly makes his presence known as gun-shots ring throughout the track and echo the danger of the environment that AJTheKid seems to find himself surrounded by.  That being said…lyrically, AJTheKid raises himself up ten-feet-tall here, presenting an image of a street-wise rapper that basically stuns the rest in their tracks…”Froze Like A Manican.”  Featuring Lil Rue, this first cut seems to hit the mark pretty dead-on at the outset of this EP…production’s tight, performance is solid…ideas are all there and the hooks work well…it’s a great start with lots of style you can easily hear register and connect with impact on the listening ear.

Keeping it lyrically-tough, AJTheKid continues to rise in confidence on “Never Backdown” featuring Liqz.  Another excellent beat produced & ready for these emcees to do their thang – and they do it well as they weave their lyrically-complex verbal-beatdowns, serving up reminders why you’ll find these guys at the front of the line for the club.  Again…AJTheKid keeps it real by letting us in on the fact that everything he’s doing now all started in the basement, one day, way back when.  I don’t know if I’d go as far as to say that this is a humble-rapper/hip-hop artist by any stretch of the imagination – but at the very least, he’s not forgotten where he came from before it all started to take off.  The verses keep the grind sharp with the beat – AJTheKid has definitely proven the capabilities of two successful collaborations through these opening tracks and surrounded himself with talent that rises to the occasion in support.

“Living My Life” has a few slight issues by comparison to what we’ve heard already.  The low-end rumble of this track does tend to take over the sound overall…but really it’s more to do with the impact of the volume of the music slightly dropping in conjunction with the energy and confidence in AJTheKid’s vocals.  I think he does well in the hook…but the opening verse sounded like it was missing a bit of the pop, punch & confidence we’d heard in the first two tracks, in addition to the tracks to follow.  So it dips a little bit here, right in the middle of the record…but thankfully, there’s a solid-serving of redemption within “Living My Life” that keeps the song a worthwhile listen – and that redemption comes through the voice of Alma Rosae.  She puts a fantastic turn on the mic and brings the A-game to this track…and if it wasn’t for her…there’s a chance this track might have missed the mark for me.  Again…the hook itself is strong…the music, maybe a little minimal and not exactly the strongest on the record…it just wouldn’t have been enough to standout like it should were it not for the wicked-verse laid out by Rosae.  Love the tone of her voice, love her delivery, love the words – I think she’s a real talent and sounds great; even heading back into the chorus-hook, AJTheKid sounds re-energized after she trades off the mic back to him to take the song to the end.

“Mob Anywhere,” as I mentioned at the beginning of this review, was the track we selected to play on our latest podcast episode.  Great use of humor contrasting with a serious beat and confident flow you can’t ignore – “Mob Anywhere” was designed to be flashy and attract all the attention it should be.  It’s got personality, it’s got attitude and a great mix – “Mob Anywhere” was an immediate standout for the clarity of the idea, sound and commitment…definitely a highlight on the Your Neighborhoodly Whiteboy “City Situation 2 Town Business” EP and a natural choice to spin on our show.  This cut has AJTheKid at the top of his game, spitting lyrics out with speed, precision and quality-skills…it’s a little more encouraging to keep the party going that getting a fight started-up – but that element of danger & menace is still sharp, pointed & focused on “Mob Anywhere,” which is very true to the signature style of this artist as far as I can hear.

On the SBS Podcast, I do my best to find that middle-ground…to find what is not only something I’d like to listen to myself, but also something that represents the artist or band well and features a song that really highlights their best-foot-forward.  In following that logic I’ve concocted, “Mob Anywhere” seemed like the right choice…but I could have made a supreme argument for the final song on the EP, “No Witness” to be the chosen-one as well.  I think the complexity of the time, the stuttering electro and its twists and turns make for a captivating listen and a challenging rhyme to create & deliver – and I think AJTheKid showcases some of the best verbal-gymnastics from this emcee as he closes out the new record.

Overall…I feel like AJTheKid has done well here.  It’s all tightly put together for the most part…and I think there’s the beginning of something good here.  I think the hooks will develop and get stronger over time for this guy if he keeps his game up…what is laid down here over these five songs is good, but I’m still not quite sure he’s done enough to fully separate and set himself apart from the rest.  With the same hunger, determination and attitude applied to marketing and making a brand out of Your Neighborhoodly Whiteboy AJTheKid – I think this guy stands an even greater chance of success and being able to stand out from the rest in the hip-hop/rap game.  As it stands – it’s a good introduction to AJTheKid that showcases his solid talent to rhyme and his aggressive approach to a modern-day sound.