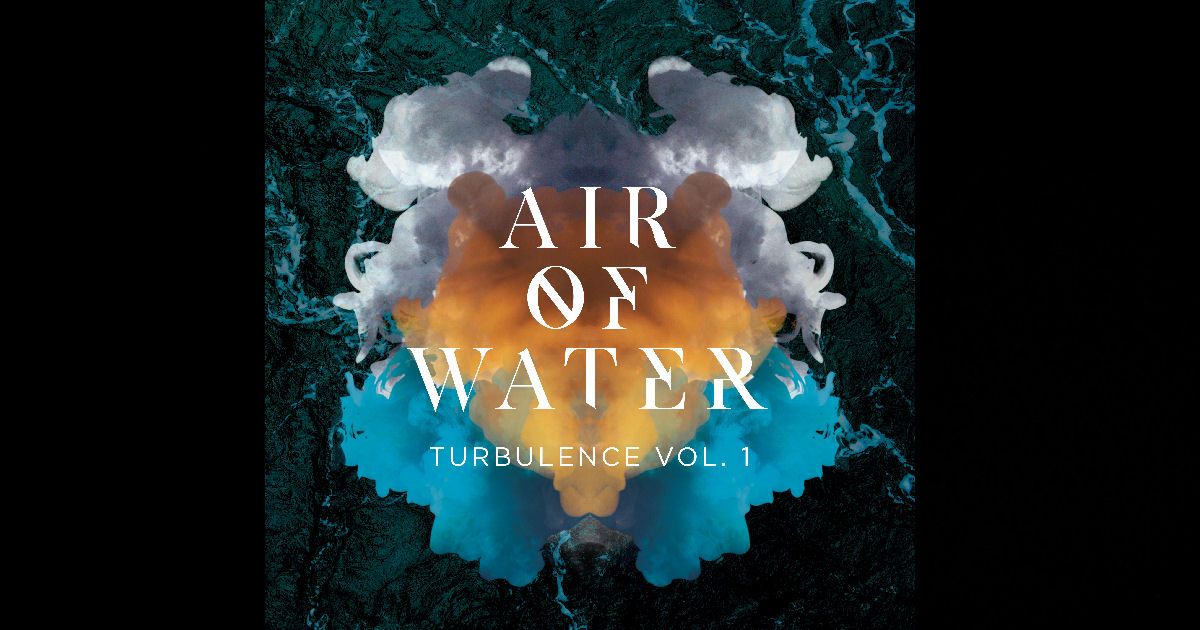 If you were to look at the social media pages of Air Of Water before pressing play on the music – and you’re a fan of the alternative-era like I am – chances are you’ll be as excited about this project as I became.  We’re all a sum of our influences to a large degree – so to see a list that contained just about every name I grew up listening to & loving from Alice In Chains to Soundgarden, Candlebox to Stone Temple Pilots…even Vertical Horizon is in there!  Maybe this is all me nerding-out in some sense, but these kind of details always provide insight, excitement, and anticipation.

And besides…you get extra points from me if you list Vertical Horizon…it’s just a straight-up fact that 90% of the world or more completely missed how awesome that band is; safe to say that if they’re mentioned as an official influence, that Air Of Water is in that 10% of bands out there that ‘get’ it.  Again – this might all seem trivial to many people out there, but the reality is, information like this tells ya something.  Even in the thick of the grunge references you’ll find on that list, if you know your history of the time-period in the 90’s when all these bands were out there kicking ass, you’ll notice that the ones that are listed have always had a heavy tendency for adding bold melodies to their own twists on Rock.  There’s still a ton of other names that could have been added from that same era, but you get what I mean?  The names that are listed are there for a reason; they’re relevant comparisons on many levels.

On June 22nd, you’ll find all this out for yourselves when the EP is officially released…until then, you’ll just have to take my word for it.  Air Of Water is undoubtedly influenced by 90’s alt-rock & the grunge sound – but the songs are approached in a way that borrows from its essence and expands it for today.  I listen to a track like “Soak” and I can definitely envision a world that’s ready for something like this again in the right here & now; we’ve been stuck in the electro-circuit & imprisoned in the music of talent shows & top-40 sensations for what feels like a decade…maybe it’s about time that dynamic shifted once again.  Undoubtedly, there’s a bit of the lethargy and strained energy in the sound of “Soak,” which echoes the lyrics in a solid match…kind of like the words of the weary & wise traveler of the world that’s seen it all.  Just past ninety-seconds, you get the biggest burst of personality added in to this first track through the guitar solo as Air Of Water lights-up the final minute of this tune with some seriously glorious instrumentation as the hooks are sung on repeat in the background.  “Soak” kind of has a Big Head Todd & The Monsters kind of sound to it…one that fuses together a quintessential acoustic sound in amongst bigger rock-inclined ideas, resulting in a short opening tune that wastes no time at all in moving from part to part & building upon the blocks of where it all began.  By the end, the conclusion is definitely that the hooks hypnotically work their magic…”Soak” becomes quite memorable over time.

I really dig the alt-goodness of “Love Song” – I love how the vocals on this song came out and I’m a huge fan of the uniqueness in some of these lyrics.  That last line of the chorus, ‘take a cinder block and smash my mind’ always hits home…there’s just such an immaculate display of grunge-attitude in how the vocals come out delivering that line, every time.  I also really dig the way the bass sounds in this particular tune – I think those bold single tones really drive this melody throughout the verse and I think they take on even more of an important role during the chorus.  No matter where you find’em, the bass-lines have great presence on “Love Song” and keep this rhythm tight & the song delivering on its promise of entertainment at every step.  With the bass being so locked-down with the drums in the rhythm section, it also allows for those guitars to get seriously wild and roam a massive amount of terrain when it comes time to solo – and boy does Air Of Water take that moment for another ride on this cut!  Overall, it’s the amount of sheer sonic expression you get from the vocals on “Love Song” that give it the added edge & personality that this idea needed to pop & stand-out from your speakers.

“Soak” is a decent tune, “Love Song” is likely a better one overall, and then to me, the leap between the quality of the writing between these first two songs and the way the third song “Alright” comes out, is like Air Of Water just went and skipped five grades to graduate early with honors.  I really think this song is beyond impressive…and considering it’s a mid-tempo tune, I think you gotta give this band some extra credit for standing out in the field it’s toughest to do so in.  The easygoing nature of this entire vibe feels like one that I could put on at any time and it would set my soul at ease…there’s a remarkably peaceful atmosphere in this song that somehow makes everything surrounding you seem as comforting as home is.  Easily my favorite…hmm…just about everything when it comes right down to it, but I was going to start with the vocal performance when I began that sentence; I think the melody in the vocals and the mix on the sound is pure perfection – it’s absolutely stunning to listen to, warm, inviting, & enticing.  There’s a gentle pace, thoughtful vocals & lyricism, beautiful tone on the guitars, brilliant writing in the vocal-flow & melody…”Alright” is a completely charming tune that’s certain to draw you in to listen.  As much as I love everything about this song, sometimes it came down to the most minor of details, like just listening to how relaxed and comfortable the strumming of the chords are on this song…the entire vibe is just spectacular when it comes right down to it.  Not a thing I’d dare say to change about this song…I might even go as far as to say that this humble melody might just be one of my favorites of this year so far – I really think Air Of Water has created a timeless gem and beautiful melancholy melody with “Alright.”  Flawless…sincere…intimate and highly endearing, “Alright” is much much more than just “Alright” – it’s an essential part of what makes this EP from Air Of Water as highly memorable as it is.

It would be tough for a song to stand out after such an incredible display of everything being in its right place like Air Of Water has on “Alright” – but I felt like the final track “Preacher Man” held its own.  In many ways, this final cut pronounces that alt/grunge influence more than the rest, even though the acoustic vibe is more prevalent than ever before.  The added layers of vocals or effects that get applied to this cut are freakin’ brilliant…a really clever twist on the intensity of this track and how that translates over its length.  The music is absolutely wicked…don’t get me wrong, you’d still feel this vibe creep right up on ya even if it was an instrumental…but the way the guitar churns along like an acoustic timebomb and how it gives way to that moment in the verse where those added vocals come in…that’s just purely awesome right there.  The music still more or less remains steadfast in its alt-acoustic grunginess, but due to the twists & turns being made on the microphone, intensity exists and thrashes out where it otherwise might not have, you feel me?  And as subtle as much of this performance may be when it comes to the energy of the verse, or at least its first-half, I think it’s quite commendable just how much pull the entire vibe of “Preacher Man” has…you’ll want to stick around for this musical sermon.  In terms of accessibility for the masses…this final cut is probably the hardest sell to the people, but for those that dig their alt-acoustic tunes…that brooding like, Days Of The New type-stuff…you’ll be into this for sure.  It’s a final display of the different dimensions in sound that Air Of Water has been willing to explore throughout the Turbulence Vol. 1 EP, which has been a pretty killer listening experience all-around.

Find out more about Air Of Water at the official page at Facebook:  https://www.facebook.com/airofwater