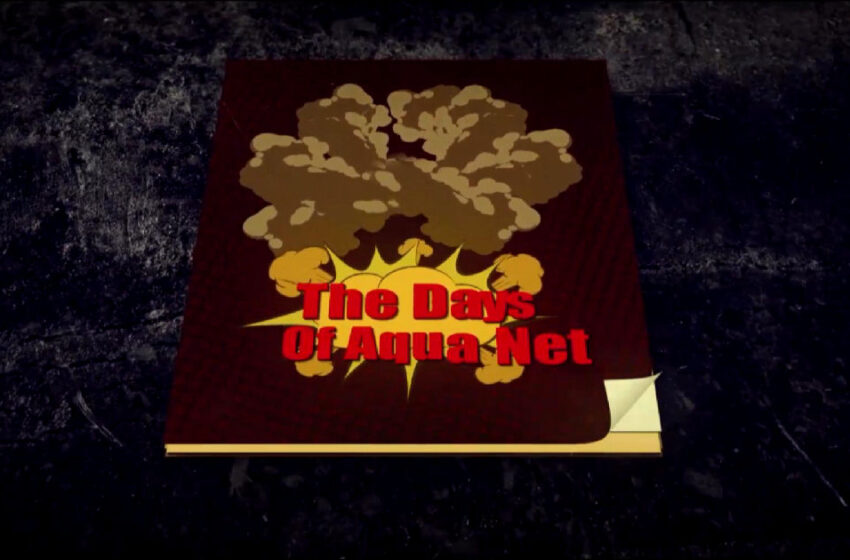 After Adam – “The Days Of Aqua Net” – Single Review

Congratulations to After Adam!

It’s not all that often that a slick Indie-style reference slides by me like this one did when I was first looking at the title.  You see folks, I was a strict Dep Gel man myself…back in the days I had hair worth mentioning & not so limited to my ears…but there was indeed a whole era of hairspray & whatnot that took place even before that.  I mean, to be fair, we had Aqua Net too…I really should have caught onto what After Adam was putting out there in the title of this tune before having to Google it, but alas, here we are and that was indeed the case – I looked that up to make sure I had some idea of what they meant, I’ll admit it.

I looked up lots of stuff really, with After Adam being a new project out there & all.  It’s a side-project centered around Justin Murr of a band called Liberty N Justice, which…like…I mean if I’m being honest it really kinda looks like that band is based around him as well.  Y’all remember back in the day when Stephen King started writing books as Richard Bachman?  I have the feeling this is kinda like that.  A lot of people assume he just wanted to write under a pen-name for his own amusement & to hide himself away somehow – but in reality, he just wrote so many freakin’ books and was only able to publish so many under his own name without some kind of weird breach of contract situation.  And so Bachman was born, to give him an additional outlet, of which he desperately needed, lest he implode on his own creativity welling up inside him.  You run into these kinds of inspired artists out there in the world from time to time…not often, but sometimes…and you know it when you do; the kind of artists just like Justin Murr who probably can’t be caught without some kind of instrument in-hand, always making music of some kind with someone.  They’re people that not only continue to excel at what they do themselves because of the non-stop commitment & effort they put in along the way, but artists like Murr also raise the whole level of the music-scene around them through their collaborative spirit & welcoming attitude.  At least this is what I’m taking away from what I see out there online…to be fair, I’m just like you in this scenario, learning about After Adam and their debut in the music-scene this year…all new stuff, lots to learn about’em still and lots of blanks left to be filled in along the way.  Like, as of right now, you can tell from the way the posts on the social media boards are written that there is likely at least more than one member in After Adam…but as to who or how many, that’s actually still a mystery as far as I’ve found out.  I looked & looked & scoured the wall at Facebook…I can find at least a picture-style logo-thing with two heads on it, and a post that mentions an “incredible pop singer from overseas”…and with two, as they say, being more than one – I’m thinking there is at least another entity making music with Justin in After Adam…and I’m assuming there’s still lots more information to come as this shiny new project continues to soldier forward in its breakout year, straight up the charts.  Exciting times – word on the street is that After Adam is the first music Justin’s put out in over thirty years that’s not Liberty N Justice.

Anyhow.  Long intro aside (sorry folks, you know I ramble) – I really like what I hear in this side-project here and After Adam had no trouble at all pulling me onboard.  With over thirty years of experience, it’s more than clear that Justin knows his way around the studio and how to get the best out of his music, and you can hear the professionalism run through every ticking second of this tune from the songwriting on up, straight into the inspired performance and stellar production you’ll discover.  Lyrically, once you finally Google Aqua Net like I did if you don’t still have some squared away in the cupboard waiting for 80s nights to come back when the bars & clubs open up again – you realize what a sweet nostalgic reference that really is and what the whole title represents in that respect.  “The Days Of Aqua Net” are all about the days gone by, memories of life & love & the freedom to pursue both without a second thought.  It’s a tightly crafted and really well-executed concept, and there’s no doubt that the hooks are going to catch the attention of a great many of you out there listening & checking out the new video supporting “The Days Of Aqua Net” at YouTube…there’s a ton of accessibility and universal sound here.  Essentially, you’d probably have to struggle much harder not to like or love this tune than to just turn it up where it belongs, so why resist?  Vocals are really strong, confident, and filled with exceptional tone; whomever this mystery man is…this “incredible pop singer from overseas” that’s singing for After Adam, Justin has certainly found the perfect fit.  Dude slides right into this song with swagger & style, and holds nothing back whatsoever…and I’m loving that…you can hear the heart & soul put into this performance.  Fantastic harmonies, excellent lead, musicianship that’s right on-point the entire time…I mean, if there’s something worth complaining about, I’m really not hearing what that would be…and you know I’d tell ya if I found something!  I hear nothing else but green lights ahead for After Adam as they speed towards their debut record called Cosmonaut Cowboys…the hybrid sound of “The Days Of Aqua Net” could just as easily appeal to fans of Indie/Rock as it could to those of Modern-Country/Pop…and with a range of accessible sound so far widespread…you gotta recognize that the potential in a project like this knows no bounds.

From the verse to the chorus, from the music to the microphone – After Adam has fully loaded up on sincerely endearing melody, putting everything they’ve got into a song with a whole lotta heart – and I’m absolutely here for it.  I’d imagine you’ll all will be with me on this as well…you’d pretty much have to be made of pure steel or stone to resist the humble charm & shimmering sweetness in the allure of this shiny new single here…it’s best to just surrender, and listen.

As far as I know, the Cosmonaut Cowboys album is coming out this May, being released proudly by the Kivel Records label with their full support behind it…until that magical time comes, make sure to find out more about After Adam & stay up to-date on the latest details by visiting their official page at Facebook here:  https://www.facebook.com/After-Adam-102196401930017

Tags: After Adam Singles sleepingbagstudios The Days Of Aqua Net