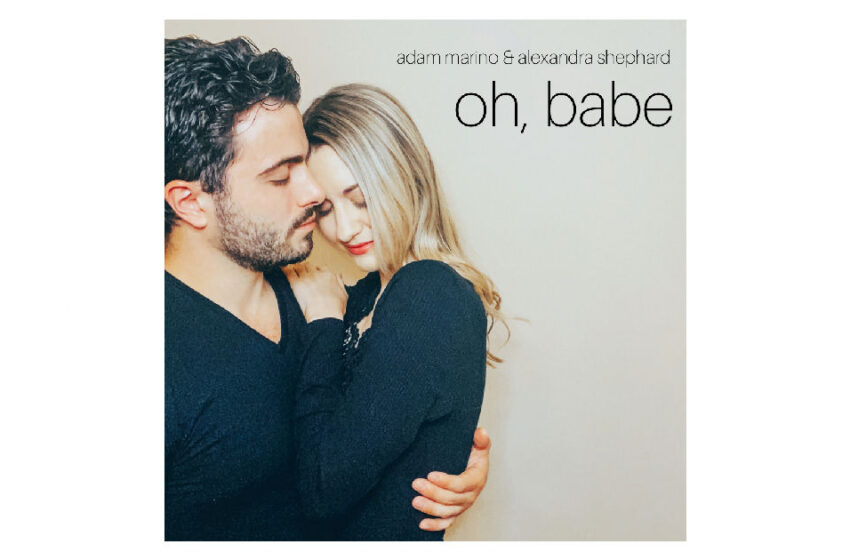 Alrighty folks…this is my first experience with the music of Adam Marino.  From what I’ve read online, the man is a “born singer, entertainer, and songwriter” – and from what I can hear on this new single “Oh, Babe” featuring Alexandra Shephard, I feel like he wants you to know all that, or at the very least make it clear…and in that particular order actually.  We’ll dissect those pieces here in this review and discuss these aspects of Adam’s music…and by the end, I’ll circle back to why I’ve mentioned this.

So let’s see here…”born singer,” he claims.  I feel like that’s accurate – I think Adam’s got great energy on the microphone and stellar tone in his voice.  He hits his biggest moments with confidence & without hesitation – you can hear how he’s got no problem writing monumental parts to be sung within the melody of a song like “Oh, Babe” – and he’s found an absolutely excellent pairing to complement his vocals in duet with Alexandra to bring them vibrantly to life.  Fundamentally, at the core of it all, a track like “Oh, Babe” will leave you without a doubt that this duo were both in fact, born to sing, yes indeed.

So then we move onto the entertainment aspect – which is nearly as resonant in the way these two perform together & sing throughout this love song they’ve got.  There’s nearly a musical-esque level of performance goin’ on when it comes right down to it – both Adam and Alexandra sound like they have no problem whatsoever embracing their respective roles directly in the spotlight when the opportunity calls, and they’re both highly engaging on their own as individuals, in addition to having voices with tone that complement each other in the harmonies.  The bottom line is, they put in a whole lot of energy and know how to suit what the ideas in the music create with the vocal melodies they’ve added to “Oh, Babe” – and when unified together, they latch onto a whole bunch of audible sweetness that is bound to connect to a ton of hearts & minds out there listening.  So there’s drama, there’s flair, there’s light & love and a range of emotions that you’ll find lead these two to spectacular highlights along the way through the ups & downs of the dynamic structure of “Oh, Babe” – born entertainers, they certainly are.

As for born songwriter as well?  I don’t hear any reasons as to why that wouldn’t also be true – “Oh, Babe” is a well-written, and strongly performed tune…as a result, its emotion-filled sound is bound to make an impact & impression on everyone listening.  If you’ve ever been stuck in the search for that perfect match and the love of your own life – or better yet, if you’ve been lucky enough to find it yourself somehow in this big ol’ world we’re living in – you’ll find the inherent sweetness in “Oh, Babe” makes that connection to your soul through the words, music, and confident way they choose to sing it.  With equal levels of passion & sincerity in their vocals – this duo displays the potential to get the most out of every moment on the microphone…there’s no doubt about that after listening to them perform.  From their softest moments, to the stunning warmth to be found in their most intense – they conquer the contrasting emotions and flex a ton of fantastic highlights in the process…lots of show-stopping entertainment on display that, once again, has that Rock-Opera/theatrical element to its overall design.

Really, the vast majority checks out…in fact, I have no qualms regarding the claims of Adam being a “born singer, entertainer, and songwriter” – that all sounds accurate to me.  Is there room for him to improve and evolve as well?  You betcha.  Lots!  And that’s always a good thing.  Let’s be real here – Adam’s debut single came out just last year…he’s still got a bright future ahead of him – it would be almost downright horrifying if there was no room for him to grow as an artist from here.  So good news – there is!  The ideas are there, the talent is exceptional – and now it’s the mix that needs to catch up to Adam and Alexandra to reach the full potential that a song like “Oh, Babe” genuinely has.  Sometimes, the answer to what we’re looking for is to actually turn things down – that’ll tell ya what the most dominant trait of a song is in the mix almost every time.  My gut reaction to listening to “Oh, Babe” at a regular volume was that their vocals are significantly brighter & well-above the rest of the music surrounding them, hence my original comment about Adam being a singer primarily, first & foremost.  Everything about the mix on “Oh, Babe” confirms that’s the ultimate priority – but in my opinion, what Adam needs to recognize is that he’s got a voice that’s powerful enough to stand out in any situation.  There’s not a doubt in my mind that the vocals need to come down and the music needs to come up in this particular single…nothing more an adjustment here & there wouldn’t fix entirely in a heartbeat – but as it stands, if you were to turn it down, case in-point, you’d probably only hear this duo singing & nothing more.  You turn it up, and it’s still tougher than perhaps it should be to reach all of what’s being offered to us from in behind the microphone – and all I’m sayin’ to ya Adam & Alexandra, is believe me, we’ll hear ya, even if the music is louder right beside ya.  What I can promise you all, is that these two will have no problem still rising to the top in their biggest moments of “Oh, Babe,” but the song itself, overall, will generate a more resounding impact with a thicker mix to the music to support them.

So like I said, we get it – they can sing – you couldn’t listen to “Oh, Babe” and possibly conclude otherwise.  And don’t get it twisted – I’m just advocating for the best in the potential of the ideas and their abilities all-around & nothing more – I think they can still get even more out of this one and I don’t want anyone out there missing the essential contributions from the bass, drums or keyboards…which as it stands now, I don’t think people really will, but there’s no doubt that it takes a bit more to dig in behind their radiant vocals to be able to fully appreciate just how much good stuff is goin’ on to make this whole moment come together.  That being said, with a closer listen & a bit more effort on our end, it’s easy to hear that Adam should be just as confident in the music surrounding him as he is with his voice and Alexandra’s too…he’s got every reason to believe in these songs he’s writing for all they offer, not just their fantastic voices.  The more Marino is able to tap into that…whatever you might wanna call it – call it completeness – the more he’ll get out of his music from the lefts to the rights, and the further these incredible ideas & well-crafted melodies he’s writing will travel & take his music around the world.

Listen to more music by Adam Marino at the official page at Spotify:  https://open.spotify.com/artist/54LLGMtEMV87mnyVQf8J62