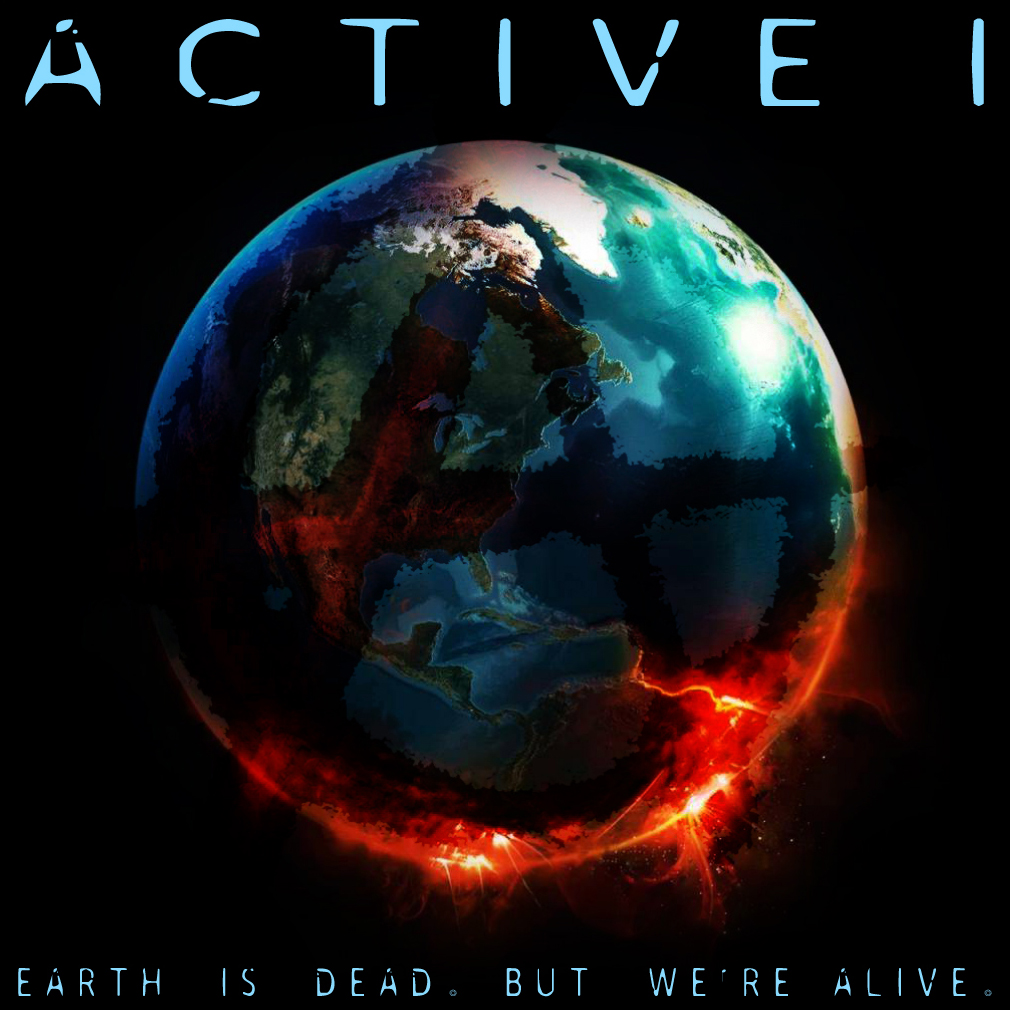 Active I – Earth Is Dead, But We’re Alive – Album Review

Definitely something I can instantly sink my teeth right into from the very opening moments. I honestly don’t even know what Active I has used to start off the opening track “Common Man,” but the haunting tones of the beginning of Earth Is Dead, But We’re Alive set the stage incredibly early and show immediate signs of intense atmosphere. It doesn’t take long before this electro-infused duo amps up the energy with an electrifying beat followed by some intelligent rap verse overtop of the sounds of this album that lets you know quickly that it’s just getting started…

As legend has it, Active I actually started in 2006 with a much different line-up. What can I say? Some things just don’t end up working out. I haven’t listened to the back-catalogue of Active I…I’m not totally sure what the story is there…I’m not sure that it even matters to tell you the truth; this is this current model – and I can tell you that this completely works. As far as I can read and see…these two, J. Lee Mezus and Paradame from Seattle, are responsible for these beats as well? I can’t seem to find any evidence to the contrary…so for now, let’s assume it is and let me just say I want to shake the hands of vibrant beat creators like this. Not only was the opening to Earth Is Dead, But We’re Alive completely captivating, but it continued to be through “LyteBryte” before exploding into the absolutely genius stuttered electro-flow of “All-Gone.”

There’s a darkness to this electro that I really appreciate and love. It’s not dreary…nothing like that…it’s a tension that exists in the music that is eerily captivating, dangerous and menacing. I can absolutely see dance-crews grabbing onto these dynamic tracks; even in their mellower moments like “Nothing Implied” these two have a back-alley mist of mischief that veils each song.

Okay what? I just read that right? These two are actually a husband and wife combo! That’s an unreal factoid there for you dear readers…this might be the first married couple out there able to pull off working together without driving off sideways into the cheddar factory. They go after it all seriously, and approach their music with real skill and intense, on-beat precision. Clearly this is music you can feel; listen to Paradame find her way weaving through the beats of “Nothing Implied,” if you want to judge her on skills, give her a perfect ten on this track as she takes her vocal-flow against the beats in clever ways that fill in the gaps and really sound incredible with the music combined.

“Provision” lost me a little…not too much in idea but a little through the production. It’s one of those tough lines to walk for an artist…for example, I know myself I’m largely addicted to static & breath-noises in my own work that can typically sound like clutter to others. “Provision” works slightly against them with an absolutely addictive hook that’s ingrained into a blown-out sound. Hip-hop is in love with the overdriven sound right now…believe me – this is something I’m hearing people make an active decision to sound like on a somewhat daily basis now. You can call me old officially…but the kids are wrong when it comes to this one aspect; and for the record, I usually feel the same about my own songs where I do add those similar elements in…I listen to them later and wish that I hadn’t quite gone so overboard with it. I think in time, and perhaps with enough examination and listens, “Provision” will prove to be similar for Active I…I think there’s a great song in there that just needs a slight tweak.

Cause…in a way…sometimes when we lay out an album we don’t realize just how much we set ourselves up for certain types of criticism coming at us. You can read that as in, ‘yup, they just went and put the blown out track in front of one of the best on the album.’ “Fly Together” is enchanting through the beat & music – J. Lee Mezus just KILLS this track with a charismatic and emotional part. Towards the third minute, Paradame comes in confidently to bring this one home in the hook…it’s a wicked composition that really speaks to this pair’s chemistry together and how well it’s working in favour of their music.

I mean, let’s just make this clear my Seattle friends…Active I…you’re extremely close to where we are at sleepingbagstudios in the valley of BC, Canada…and let me be even more clear – you’re on my radar.

I’m listening to a track like “Can’t Get No,” and I’m thinking there’s a lot I’d have in common with these fine electro-humanoids. Paradame’s verse is completely SICK…just awesomely trips out of her mouth as she claims authority of the microphone – there’s a real addicting quality in the confidence of her performances. J. Lee I dig too for the record – occasionally on tracks like “The Music” he dips a little towards the sounds you hear from that dude in the band Len. All I’m saying is be careful! Admittedly the tone works well with this track, which also happens to be one of their ‘lighter’ tunes in a sense…but for the most part with their dark-electro vibe, his more menacing sounds become more effective, present and in-place.

Talk about SICK though…Paradame LIGHTS up “Against The Brain IV” right away with undeniable skill that should be making other MC’s, female OR male, start to sweat & tremble with fear. AND…if I can just point out how RIGHT I am for a second – listen to J. Lee on this track when his part hits – you’ll hear what I mean…he’s right into it and connected right to the tone, beat & feel of this track and delivers a perfect part. An absolute stand-out with energy and exciting electro – it’s a real highlight on this album from the moment the verse starts…an undeniable single that you can’t help but instantly groove to.

I continue to be right about J. Lee when he opens up a vein on “Neu Breed,” and spills not the blood you’d expect, but verbal skills all over the place in ways even a seasoned mobster clean-up crew couldn’t make go away. Absolutely phenomenal verse, music, backing vocals from Paradame…I’m sitting here thinking to myself ‘goddamn does this work!’ while my head bobs along. Paradame spits a robotic-verse…J. Lee brings an element of mischief and mayhem into his verses; and when backing each other they compliment each other perfectly here on this second to last cut.

Earth Is Dead, But We’re Alive has had so many highlight moments it’d take more time to count them then it would to listen to. Saving one of their most creative for the final moments, “Rubber Rooms” takes the tempo down, just a beat and a piano for the most part. J. Lee rips it up at the beginning; I love the way that these two bend their words…they’ve really put the work into their lyrics and metering to make their music completely engaging and captivating to the ear. They’re using their rhymes instrumentally…these rappers carry the beats every bit as much as the music does. Highly skilled and delivering in full-force at almost any moment you could skip to throughout this album – Active I is making more than just a grammatical-mockery of any sentence I write where I use the band’s name – they’re making music with a high-standard of excellence. I probably can’t fully express just how much I’ve really been enjoying digging into these dark electro beats…there’s only so many words to choose from in my native English language.

So let’s just say I love it, and we’ll leave it at that.

Find out more about Active I at these links!

And find out more from the Audiodose label at: