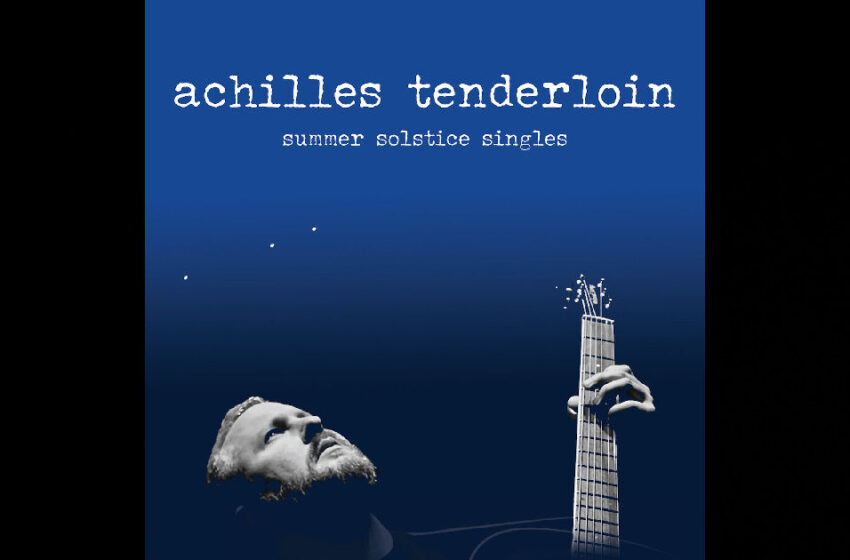 Hmmm…nothing better in music than a name that stands out…Achilles Tenderloin will do that for sure.

There are many unique things about “Little Girl Blue,” the advance single from Joe Augustin’s solo project Achilles Tenderloin, with an album coming out next year called Tincture For Trouble.  Of course, uniqueness can be one of the greatest things when it comes to the art of makin’ music…but there’s no question it can also be the aspect that tends to work both for and against us when listening ears get involved.  Are the people out there gonna ‘get’ Achilles Tenderloin?  Honestly…I couldn’t really tell ya.

What works is certainly the vivid imagery of the lyricism and the detail within the music itself…some of this instrumentation is outright spectacular if I’m being real with ya…like, listen to the solo that occurs just prior to the two-minute mark, and you’ll know exactly what I’m talkin’ about – that’s a massive highlight in “Little Girl Blue” for sure, and a part of this song I was happy to revisit again before it was all over.  Structurally speaking, it’s sound…the ideas are solid…the backing vocals are straight-up fascinating & purely exceptional – there are some extremely cool things about the way this song unfolds and takes shape.  Lead-vocals wise…oh Joe…where do I begin my man?  Look…some people are gonna dig this kind of performance, some aren’t…that’s the reality, that’s what we’ve gotta prepare for – it’s not a universal sound, and that’s the facts J(oe)ack.  That by no means implies that many people won’t like the sound of his voice or a song like “Little Girl Blue” – maybe they WILL…I ain’t here to judge that really, I’m just here to tell ya what I’m hearing is all.  Joe’s opted for a highly stylistic kind of performance, and the shakiness within his vocals is going to resonate with many lovers of Folk music, while causing a whole bunch of other folks some real confusion.  Could he have sung it more smoothly?  Sure!  Did he want to?  Probably not, and that’s exactly why it sounds the way it sounds.  He’s somewhat playing the role of the weary traveler…the old dude with the wisdom…the man that has seen it all at this point, and is passing on the knowledge before the clock runs out, reflecting on the years that have gone by…and with respect to that, again, I ain’t saying the sound of his voice & stylized performance doesn’t work – it does – I’m just wondering whether or not it’s something that people will actively seek out is all.  Hopefully they do…it’s just not something I can guarantee…”Little Girl Blue” is a quaint, slow, storyteller’s type of tune where the lyricism is really the key factor, rather than any major defining hooks to draw the people in.

I’m not opposed to it…I guess what I’m gettin’ at is that it’s a bit of a strange choice as a single to put out in advance of an upcoming record that’s still some time away…but I’d imagine that the target audience of folks this resonates with will receive it well.  It’s got a bit of a waltz-like sway to it, a fantastic level of detail within the words…and for what it’s worth, in terms of his tone, Joe’s right in line with where he should be…it’s really only his style of singing that could potentially be the sticking point or polarizing aspect of a song like “Little Girl Blue” – the rest seems pretty darn easy to like or love.  The reality is, the masses tend to glue themselves straight to a lead-singer’s voice 99% of the time…so even though all the background vocals are amazing, the instrumentation is remarkable, and the lyrical details are stunning – but I can definitely hear that it’s going to be both a hit & a miss with many in the court of public opinion.

At the end of the day, all an artist can do is what they feel suits the song best, and give it everything they’ve got…with respect to that, I feel like Joe should truly be proud of what he’s created, and that he’s tried something different than the rest of what’s out there.  Niche vibes ain’t exactly a bad thing y’all – ask good ol’ Bob Dylan or Tom Waits how they’re doin’ and I’m sure they’ll tell ya they did just fine in this lifetime…and even if the event that they somehow didn’t, their bank accounts sure as heck did.  It might take a minute for something like Achilles Tenderloin to find its audience around the globe, but of course, I could always be wrong about that…in fact, in situations like these, I’d much prefer to be.  Time will tell I suppose…it’s all neither here nor there anyhow…all you can ever do is put your heart and soul into what you create – Joe and his musical cohorts certainly have…they did what they set out to do, and no one can ever take that away.

Find out more about Achilles Tenderloin at the official website:  http://achillestenderloin.com