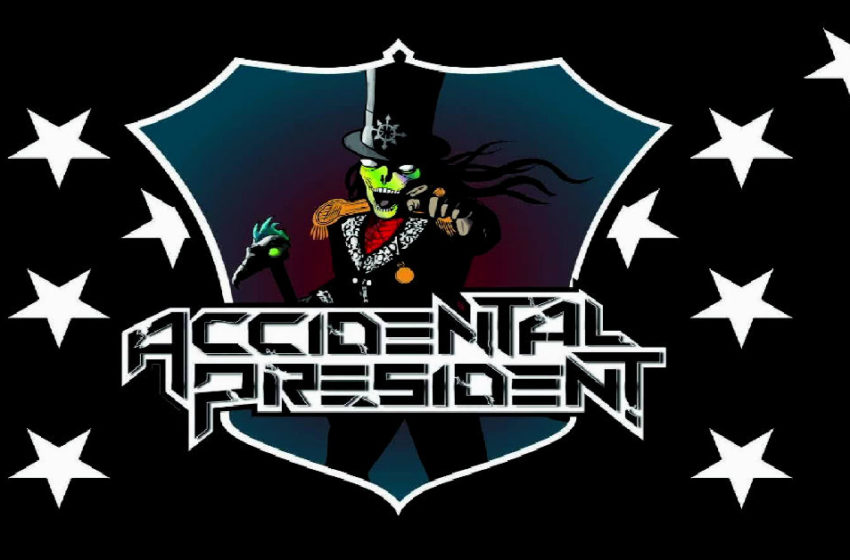 My love affair with Australia’s music-scene has been well documented throughout the history of my career as a journalist.  From rabidly hunting down everything I could find by acts like Eskimo Joe and Something For Kate back in the day (well, okay…I still haven’t stopped that search), to discovering acts in the independent scene that helped in transitioning the front lines to an edgier sound today, like Secrets Of A Wooden Hut, or our perennial favorites, Smoking Martha.  Yes Australia (as in, all of you over there) – I will always have time to listen to whatever you wanna send over here to where I’m at, in Canada.

And yep, you got it – that’s where Accidental President is coming from, right outta Sydney like a bat out of hell!  Their new single “Rotten Child” comes from the self-titled record that was just released on July 1st this year – and to give you the full-scope of what I’ve experienced from my side of the screen, it was the video I saw first.  And I’m tellin’ ya folks…instantly on a visual level this band stands out with what they’ve put into the video for “Rotten Child” – it didn’t even take five whole seconds to get me interested in what I was watching with the spectacular use of effects, the editing, and of course, the main stars of the show as they’re eventually revealed to us onscreen playing live from the stage.  For real y’all – check this out for yourself and we’ll discuss it some more after you’ve seen what I’ve seen…

You feel me now?  This is how you make an immediate impact!  The gritty look & gnarly sound of Accidental President all comes together perfectly in this lead-single/video combo they’ve got goin’ on in “Rotten Child.”  Putting in the work and getting results as strong as this would be immensely satisfying for every member of this band; if you read their bio & story, you’ll discover they’ve taken the long road to get to where they are now – but they’ve solidified their lineup at this point, and with all the right pieces in place, they’re ready to surge forward and storm through 2020 with their brand-new record.

When you’re talking about gateways into a record, lead-singles, videos & what-not – “Rotten Child” supplies that gripping & unexpected first experience you want to entice people in to listen to everything else.  From the wild spiraling & soaring guitars of Dave Ben Lee leading you in, to the sound of cymbals washing over you alongside the solid beats provided by the heavy hand of drummer Leon Cadden, right on through to the empowered confidence of their stunning lead-singer Bethany Neville rocking the mic with a hybrid mix of soulful Gothic/Pop/Hard-Rock/Metal style – Accidental President has plenty on display to keep your eyes & ears fully entertained.  When you factor in the video & visual components here in “Rotten Child” and you see them in their natural habitat onstage, they reach out beyond what you see on the screen – you can instantly recognize that Accidental President is the kind of band you’d wanna see playing LIVE.  There’s personality, character, and charisma right there in the spotlight for all to see – and I’d be willing to argue that they’ve certainly stocked their sound with equally powerful doses of those same essential ingredients.  What you’ll see, what you’ll hear – what you’ll experience with Accidental President and their lead-single “Rotten Child,” is a band that visually & audibly leaps out like they’re entirely in 3D.  There’s energy, there’s hooks, there is an aura to this band that really seems to indicate & imply that their time is now…and that they’re 100% ready for this moment.  After everything you witness in Accidental President’s “Rotten Child,” it clear they’ve set out to entertain, and even clearer that they’re completely capable of carrying that mission out in-full.  I dig what I hear in this song and how the band presents such a unified front, together as one.  I think the video for “Rotten Child” is wickedly badass and undeniably repeatable.  I love their attitude, mindset, and approach to their reinvention in 2020.

And I believe in Accidental President.  Because if the high-quality level of pure entertainment from the screens to the speakers stays as consistently engaging as what you experience in “Rotten Child,” there’s every reason to.  They’ve got that spark of something special starting up – and inspiration certainly has its own allure as well – you can see it, you can hear it…Accidental President is ready to make 2020 their most breakthrough year to-date and declare their candidacy on your playlists as the alternative choice.

Find out more about Accidental President and check out their self-titled record at their official website here:  https://www.accidentalpresident.net