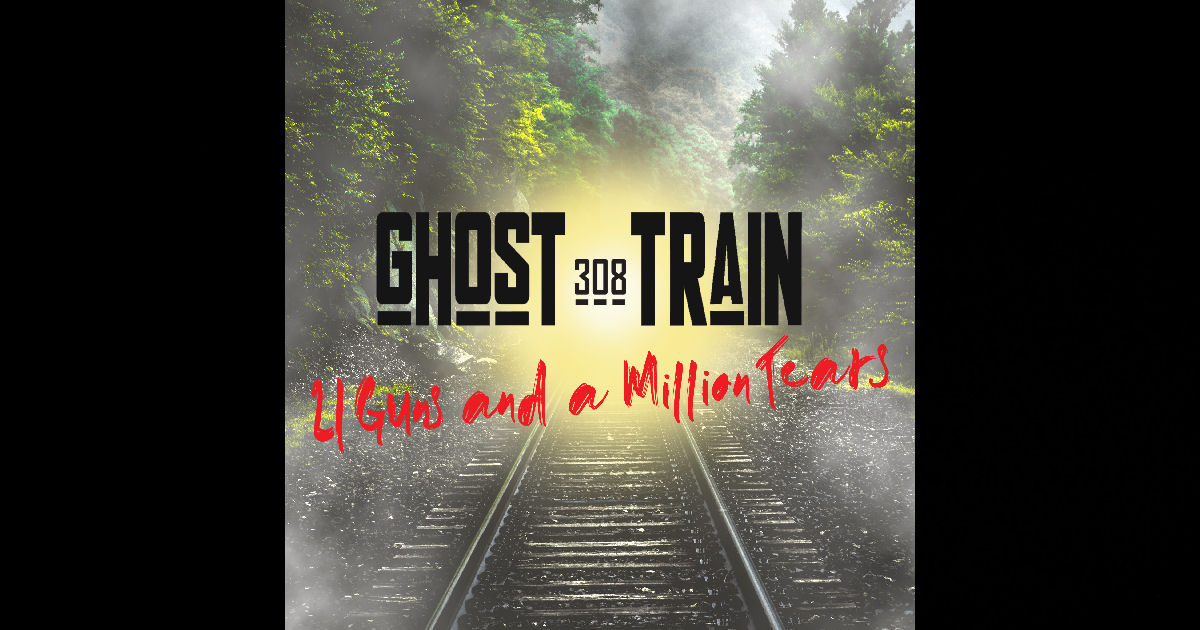 The classic Rock vibes and sound inside of 308 GHOST TRAIN’s new single “21 Guns And A Million Tears” are definitely ones the band comes by honestly.  If you check out the list of influences you’ll find legendary songwriters like John Fogerty & Bruce Springsteen that brought the blue-collar sounds of Rock to the forefront of the mainstream for years…rhythm & groove masters like John Mellencamp & whatnot – you get the picture of the era of sound that appeals to 308 GHOST TRAIN.  Arguably, it’s a timeless style of music that’s always going to have a presence in our world & faithful audience online; it might not be exactly what the mainstream gravitates to these days, but they certainly used to – and somewhere out there, all those people still exist, waiting for bands exactly like this to show up and lead the way into more of what they love from the past, right in the here & now.

Most importantly, 308 GHOST TRAIN welcomes the influence and embraces the spirit & sound on “21 Guns And A Million Tears” on a mid-tempo single that combines complex emotions & patriotism into the writing.  I’ll admit there’s an aspect or two of this tune that would have made it a great candidate for the Team America soundtrack from back in the day…but I do recognize the sincerity that actually exists here.  When it comes right down to it, “21 Guns And A Million Tears” is a tributary track that honors service & veterans, in addition to the family & friends surrounding them…or their legacy in certain cases; ultimately, you have to admire the pure intentions of what 308 GHOST TRAIN has created here in this audible full-salute.  Definitely dig how they were willing to examine the depth of the theme all-around; while there’s an undeniably uplifting thread of inspired sound that’ll run through the chorus of this cut, make no mistake, 308 GHOST TRAIN takes you on a ride of intense emotions and grim situations – but real ones…ones you absolutely know exist and are a reality for many people out there, every day.  Through the expressive release of the vocals in the chorus of “21 Guns And A Million Tears” you can feel 308 GHOST TRAIN giving a voice to the many out there that don’t have the platform to speak up on these issues…the pain of loss, the cost of war, the preservation of peace, and how all these things can stack up into intensity that’s all-too-much for the average person to be able to handle on their own.  That’s where 308 GHOST TRAIN is stepping up to do the right thing here…they’re using their platform & talent to make a genuine difference with a song that’ll truly help tell the story of many people out there.

So lyrically, no doubt, they’ll make an impact on a lot of hearts & minds out there, especially those that can relate to the words the most…people who have lost someone they love in combat or been affected in some way through their service to their country…308 GHOST TRAIN points out & reminds us that these are people we can’t turn our backs on – and I couldn’t agree more, even from all the way over here in Canada.  Musically, everything’s right in-line with where it should be…drums, bass, guitars, vocals…they’re moving as a truly unified band on “21 Guns And A Million Tears” and united through the strength & importance of the message they’re sending out to the world on this new single of theirs.  Did they push the envelope of that classic-rock sound with the additional keyboards that come in to support the main melody-line?  No!  Not at all!  I mean that sincerely…I could understand a few people out there maybe thinking that first real hit of the keys coming through might seem a bit over the top, but I’d argue it completely induces the intended results…that feeling where you want to stand up & cheer.  It becomes the audible cherry on top of what’s already been a tight tune to begin with…notice right from the drop, you’ll hear bagpipes in the distance – then listen to the chorus; the exact spot where they’re referenced in the lyrics reveals a spectacular transition in the melody and one of the real highlights of the many hooks likely to pull you in to this tune.  308 GHOST TRAIN set out on a specific mission with “21 Guns And A Million Tears” – and I’d imagine everyone listening would agree, mission accomplished.

Find out more about 308 GHOST TRAIN through the official homepage at:  https://www.308ghosttrain.com