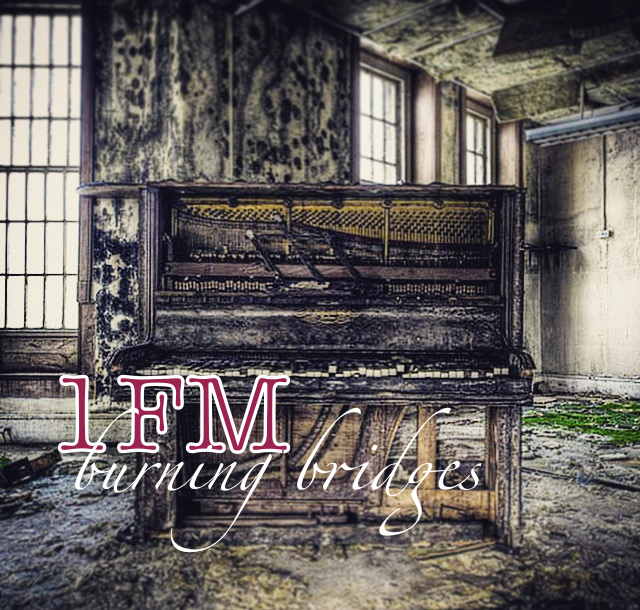 Hmmm. 1FM…I think…well…hmm…you know what? I think this band and I are hooked on a great many of the same things. When people have asked me in the past…’what music do I make,’ or maybe more specifically, ‘what’s the music I want to make’ my answer has often drifted towards the exact sound that’s now being pumped through my speakers in 1FM. It’s largely based in rock…so again, understand it’s music I would WANT to make…I’m not saying that I’d be making the best choice for you, for me, or for anyone else…I’m saying I’d simply WANT to make this music.

Why? Because it’s both challenging, and fun. Of course, I’d want to sing as well…and when you listen to the challenging parts that this three piece has come up with, you’ll get that no problem. What singer wouldn’t want the huge and expansive moments that this one takes? We’re talking some real full-lung-capacity type shit here…and some of these performances could easily leave you breathless simply listening to them.

What I really liked was reading about them as well. I’ll be damned if these guys AREN’T just like me! They’re making music for the pure LOVE of the craft…and though there is certainly a similar style & energy throughout much of the new debut EP Burning Bridges…it’s not made with a ‘let’s make (THIS)’ mentality. From everything I read & information I’ve gathered from 1FM, this is the beautiful result of a sum-total greater than its individual parts; and the sound of songs untainted…the natural tendencies and instincts of this band coming out in their shared environment somewhere in Philadelphia and making the music that comes truly from the inside of them.

Truthfully I was worried when I first began to listen. The opening song on the EP is called “Bury Me,” which admittedly starts the energy heading in the right direction…but I wasn’t convinced there was anything ‘different’ enough right off the bat. That being said – the skill in the instruments, vocals and overall presentation of this tight band is right there on display from moment one.  As the music guy I am…I was hearing all kinds of influences on this sound left, right and center…then looking them up, didn’t see a single one of them listed! That leads me to look at a picture…to see how young these young guys might be…and they’re not OLD…but it looks like we’ve definitely been graduated for a while now…so how bands like Chevelle, 30 Seconds To Mars, Fallout Boy didn’t make this list…not quite sure. I can get potentially how bands like Marvellous 3 and Superchunk didn’t make the list…most people aren’t going to know those two anyhow…

But I’m hearing them all at different points throughout the Burning Bridges EP…and after “Bury Me,” completes…the material does become stronger. Again…I want to stress something here…they WANT to make this music…1FM has not claimed to ever once gone out to pursue the reinvention of the wheel, they’re looking to do what they do extremely well, but most of all to have fun. When you examine a song that pays homage to a great many relevant sounds out there in our music today…you have to give them a little extra credit for coming out gunning and really nailing the style/sound of explosive rock. “Bury Me” is a good song, there’s no doubt about that really…but as far as the true depth of 1FM they’ve also clearly made a conscious choice through the layout of this EP to reveal their skillset slowly as the music blazes by.

With the most Chevelle-style intro this side of Chevelle themselves, “Here I Am” comes out gunning similarly to the way the infamous group of brothers started out This Type Of Thinking (Could Do Us In). Now…what you might not know…is that I actually reviewed that album way back in the day for another online magazine…and I was lambasted by my editorial staff for supporting such an ‘uninventive’ sound in rock. Like…excuse me sir…I says pardon?

All of the people out there that can’t hear the expression in the explosion of “Here I Am” can pretty much help themselves to a big ol’ bowlful of dicks with suspicious cloudy milk. It contains that same pulse and menace of a track like “The Clincher” from Chevelle…and the structure itself invites comparison quickly. But I also mentioned Marvellous 3…and vocally we’re going to head straight into their catchy territory albeit more aggressively, but the tones are coming through very similar in the harmonies. This song in particular…perhaps more than any other on this EP, highlights everything that’s going RIGHT with 1FM and their ability to combine mayhem & melody with flawless precision and unbelievable execution. When 1FM expands and rises to the extreme potential of their band in the chorus of “Here I Am” it should BLOW YOUR MIND. If it somehow does NOT you are the human equivalent of that toaster we’ve all had where we have to actively tell the toast to pop out long after the toaster itself should have known it was done. And that should scare you.

Honestly though…I’ve heard a great many choruses out there of course…but this has absolutely got to be one of the most emotionally charged and completely powerful performances I’ve heard a band ever put into a song. “Here I Am” is a MASSIVE anthem I could happily digest for breakfast, lunch and dinner and certainly snack on in between those meals as well.

“Dear Son (Remember Me)” has to follow one gigantic song…and this was where I thought to myself…’there’s no chance’ for these guys to continue on convincing me they’re this awesome from here…slyly in the back of my mind I’m counting the millions of times the mainstream’s industry-management teams have sold us “Track #2” on an album only to surround it with energy that can’t live up to the previous highlight moment on single-worthy “Track #2.”

Now…what I’m NOT going to tell you…is that “Dear Son (Remember Me)” is a better song than “Here I Am;” but what I AM going to tell you is that it doesn’t need to me. It just needed to stay CLOSE…close enough so that it wasn’t like showing off the greatest layer of the cake only to hide the real mistakes around the back. And you know what? I found myself smiling from ear to ear from the sincerity and heart in this music…I found myself convinced not in the incredible opening songs, but here in track #3. This is where I realized that there are SO MANY things going right in this band that they can really do no wrong. That consistency you can audibly HEAR is literally provided through their own love, dedication and enthusiasm for the music they’re making and their time spent together…and it’s incredibly inspiring.

Tim Laigaie, Nick Passio and Joe Altomari…if you could all contact me later and stay after class to explain what roles you’re in for your band, that’d be great. Yeahhhh….might need you to come in on a Saturday…yeahhhhhhh. But truly…just saying I wish I could give them more credit individually – but I also get the sense from what I read that these guys aren’t looking for individual or any kind of fame in particular. This incredible band really just wants to do what they’re doing for the rest of their lives…and I truly hope we’re still living in a world that allows guys like this to get paid enough somewhere along the lines to let them do just that. They all deserve credit for some truly incredible song-writing and making an impact on ME through rock music…a genre which, if could appear in human form, I’d often kick squarely in the jaw for being so unimaginative and lazy. The music of 1FM is anything BUT lazy – this music flat-out doesn’t exist any other way other than their own sheer will and WANT for it to exist…and I’m so thankful for that right now!

On a way-off Canadian side-note here…anyone out there familiar with The Odds will straight-up wonder if 1FM is Craig Northey’s return at the outset of “Dear Son (Remember Me)…” guy sounds like a dead-ringer before the song truly kicks in. Great set of emotions on display in this song and truly powerfully performed…again, for me, this was the convincer. They found a way to put out a song that is like a miniscule fraction away from the incredible explosiveness and raw power of “Here I Am.”

I didn’t think they could do it. Well done boys.

“Eye Of The Storm” was perhaps the most ‘typical’ of the sounds you’ll find on the Burning Bridges EP, up to and including its title-referencing chorus. That being said, it’s once again recorded, performed and plays perfectly. Great harmonies on this one from the three…fantastic drums really drive this one along. They’ve all had their moment from drums to bass to guitars…it’s all been precision perfect all the way through this EP and the energy of their enthusiasm driving their music never lets up for a moment. This song made me think most of pool ol’ Superchunk…I’ll never for the life of me understand why that band didn’t catch on so much more. I think once we all lost ourselves in the world of compression and standardized recordings…there was just no room for a sound so real and so raw like that anymore without refinement. The albums still hold up…but it’s impossible for the youngsters out there to insert these songs into massive playlists without noticing the difference in production qualities. “Eye Of The Storm” would be, to me, what comes out when attempting to harness a sound like Superchunk’s onto a modern day record. Still sounds great…just a little more contained, and for most people’s experience surely to be a lot more palatable for the earholes of the many.

Did they save the biggest bullet in the chamber of five to be fired off at the end of this EP? They very well might have…”All I Need” is a spine-tingling melody from the moment the piano & vocals start out this departure from the overall energy on Burning Bridges and mellow-out somewhat by the end. If there ever needed to be any more proof of the ability of their song-writing or how special their combined talents become…then it’s all right here for you in this final track. You can hear this kind of song finding its way to fit the sound of gigantic bands like U2…maybe Blink 182…someone gimme another number before I run out of…wait…30 Seconds To Mars… 1FM doesn’t sound directly like ANY of those comparisons…my point is simply that they’ve written diverse & dynamic material here that could be adaptable easily into the sets of some of the world’s most recognizable bands and artists…and they’d be PROUD to have written a song as giant as “All I Need” becomes through its powerful display of emotion.

So there you have it…officially on record…I’m happy to say there is a lot more than something here in the music of 1FM. I could try to explain it…but I can’t and they know it…cause they can’t either. There’s a magic within these three members that really shines through on this record and brings you right back to those moments you first experienced in music when it was full of wonder, excitement and hope…still represented freedom, creativity and had the energy of ten bottles of vitamins. 1FM have managed to put out an EP that truly reflects them from the inside-out; an honest recording that came out every bit as pure and golden as their very own intentions to make music in the first place.

I highly recommend going to check out more about 1FM at their official pages: