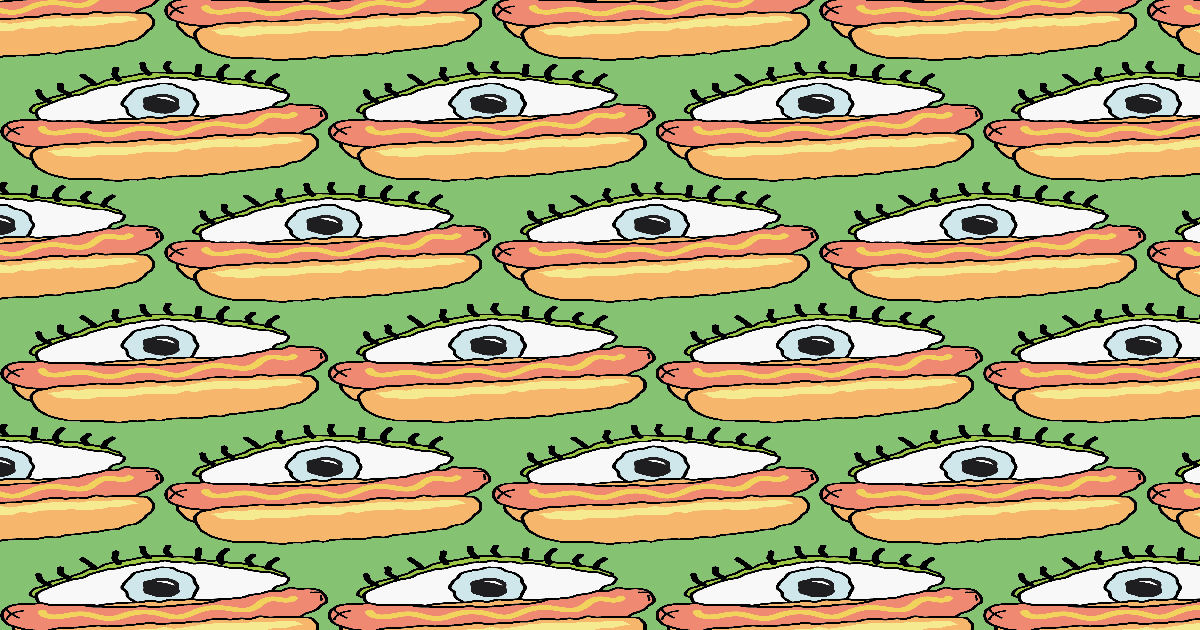 Alright…here’s what I can tell you right off the bat – if this new Colorado-based duo is going to sound anything like they are on the first track I checked out called “Black Cat Blues” – they’re gonna be BIG.  Sometimes it’s shocking what you can find in the independent music-scene…even more shocking when you know how new a project like this still IS, having only been started officially this year.  Second time this week that this has happened to me in a review with a two-piece band; last time it was Voluptus Mors that put in an effort that could rival the mainstream in Trip-Hop…today here in review, music from Play Pretend that I’d pretty much want to listen to more than any of the tunes written by their listed influences.  Well…maybe not Gary Clark Jr., I can’t deny how badass that guy is…and I go through the occasional Hendrix phase once in a while too – but what I AM saying is that Play Pretend is like, an inch away already from being able to hang with a crowd of that caliber, and they’re already rocking all over dried-up ideas like you’ll find in the Black Keys after fame set in and their inspired sound went missing. 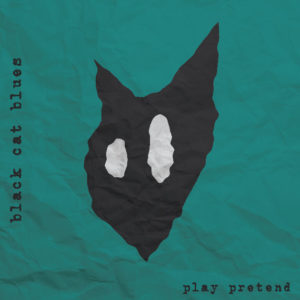 Is “Black Cat Blues” closer to that time when the Black Keys did have the magic?  Absolutely yes.  But what I like about this single in particular is that it isn’t completely Black Keys, nor is it completely White Stripes…there are similarities you’ll find to both through the approach of a two-piece garage-rockin’ band, but I’m already hearing a ton of potential for Play Pretend to take it all even further.  The guitars from Joel Monroe…are SO KILLER you should hire a bodyguard just so you can listen to’em safely!  The talent, skill and instincts are completely ALL there when it comes to this guy’s capabilities.  Wildly expressive guitars rip, slide and grind through this stomping rock anthem…deadly sound in the low-end rhythm and a continually storming beat provided by Jasmina Bonilla from the throne.  What Joel brings to the microphone on “Black Cat Blues” is every bit as essential in the mix of ingredients as to why this single comes out so scorching HOT – he’s got the confidence of a full-band inside just the one man.  Dude isn’t afraid to lose himself right in the moment and get right into the groove…and it’s because of this that we as listeners, go right along with Play Pretend as “Black Cat Blues” plays on.  The ‘rules’ for alternative-indie-garage-blues-rock don’t apply on a structural basis…they never have; the only thing that really matters in a band with a sound like this is that you can HEAR that connection to the style & material with such commitment, focus, and passion in the music…and these two have all that in spades.  While a song like “Black Cat Blues” might not have the typical sing-along style hooks some people crave, the vocals are still a perfect fit for what’s happening in the music and I’m sure people will dig it – and besides that, there’s a ton to offer on this first tune musically that will more than satisfy in exchange, through the vibrant sound of the music itself being an endless supply of electrifying & exciting moments.

Needless to say at this point, but still worth pointing out once more – this was an exceptional first impression from Play Pretend…these two take no prisoners on “Black Cat Blues” and give it the ol’ 110%.

Now…first things first before we move on to the next track “Space Song,” because this song made me think SO MANY things and I want to get them all done here in some sort of potentially cohesive order; but make no mistake, I think “Black Cat Blues” is probably a much better song overall if I was forced to choose personally.  BUT…with that being said…I wouldn’t deny just how much accessibility there is in “Space Song” for the masses out there…the hooks and energy are present throughout this entire cut in a way people can sing, dance & rock right out to – and isn’t that at least half of what music is for anyhow?

For real though – you know how I KNOW beyond a shadow of a doubt that Play Pretend has got what it takes?  I’ll let you in on a little (not so) secret fact…I don’t even really LIKE blues-rock!  In fact, if it wasn’t for Evanescence still consistently wasting their potential more than any other band out there, if you were to flip through the pages here at sleepingbagstudios, you’d find countless instances of me calling out the Black Keys for being the runner-up in that contest year after year.  So to be clear…it’s not really my thing…unless it’s done RIGHT like this is…because I don’t just like what’s happening in Play Pretend – I LOVE this. 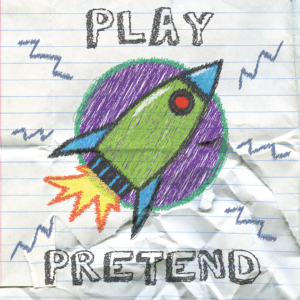 From the pictures you’ll see online, it looks like Jasmina plays a tight kit, keeping the amount of pieces limited to what purely works without all the unnecessary flash that many other drummers tend to use.  As a result, you get completely flawless, rhythmic rips from the kit that contribute to the mood, melody and structure of the song, complementing what’s happening on the guitars or plowing the road forward like she does on “Space Song” to drive the pace and pump-up the energy.  Great tone in the kick-drum on this cut…it can certainly be tougher to stand out at times with less pieces to a drum-kit – SOMETIMES – Jasmina demonstrates she knows exactly how to make every part of what she uses to her advantage.  Joel brings wicked character & charisma to the microphone and to his guitars; at times I felt like he out-wrote himself from verse to chorus here…but on repeat listens it seemed like either part could grab my attention at any time.  The guitar-solo is MAGNIFIQUE…that’s right – I went into a whole second language to describe it cause the ones I’ve got in English just ain’t gonna cover it.  Beyond any hooks in the writing, beyond any of the ideas or the sound or the style…again, what matters in the music of a two-piece is that commitment…that confidence…that knowledge that, if given the opportunity, they can completely shake the walls just as hard as any four or five-piece band out there.  The way that Joel and Jasmina attack their tunes is more than impressive…the production, execution, performances…it’s all solid stuff and exactly how I’d imagine they’d want it to sound already, which again, is incredible for a band so new.  I’m sure their sound will evolve further over time of course, everyone’s does – but the amazingly firm-ground these two are already rocking on will leave you wondering if they ended up spending a serious amount of dough to get this all to come out the way that it has.  The facts will speak for themselves…either they DID that, and put themselves in a position to really come out with a WIN for their music – OR…and this is one hell of an OR…maybe this is all them from the ground-up.  If it IS…then there’s some truly next-level awesomeness brewing here…because everything you’ll hear in these two singles from performance to production, ideas to execution already shows Play Pretend can seriously compete and hang with anything else out there that might come through your speakers. 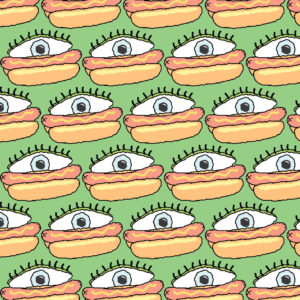 Even on the final single, “Summer Heat,” which of all the tracks examined goes hardest towards the indie/garage-rock style in production – I’d still imagine that’s exactly the sound they were going for.  Super satisfying to myself as an audiophile…I can see the duo potentially running into a few dissenters on the mix for “Summer Heat” because it really does head into the garage for its inspiration…but if you know what you’re getting into and you dig that kind of sound, you’ll love this final cut.  Play Pretend puts the energy into every second of this new single and gives the sparkling pop-inclinations in the melody a dirty punk-edge, which gives the entire idea a rad contrast in the music that’s highly entertaining.  Embracing that alternative spirit in the chorus – I love these words and how fantastic & direct they are:  “I’m just another creep/Cuz I love the way you sleep.”  That’s genius…I’m not even remotely kidding.  To follow up the claim of being ‘just another creep’ with like, the most DEFINITIVE creepy-visual of said creep like, standing over someone’s bed or watching them sleep through the window from outside…I mean, it’s all implied imagery that ends up flooding our minds, but it all ends up being SO effective!  Joel has a couple of moments where his tone in the vocals drifts a bit from the standard he’s set on the other tunes, but largely slays this one once again…the few imperfections along the way only adds to the attitude in the atmosphere and punk-vibe that runs through “Summer Heat,” in my opinion.  I’ll say this…overall, I think the energy on this last single is great, but it does sound somewhat ‘easier’ for these two than the other tracks did by comparison.  Nothing about that makes it ‘wrong’ in any sense…”Summer Heat” is still a great tune…but when stacked up with something like “Black Cat Blues” it’s harder to say if a stripped-back, more simplified & straight-ahead punkish track is going to make just as much of an impact with the people out there.

Hence the final ace up their sleeve and WHY Play Pretend is going about this all the right way.  With these singles being released, they’re likely testing the waters out there just as much as they are in the process of discovering exactly where they’ll want to take their music in the future to come.  Perhaps with the input from you fans out there, and how you respond to the different directions they take in their music, that’ll somehow help shape the course of the music over the years to follow.  Play Pretend has incredible potential and at their most focused, have already displayed a sound bold enough to compete with the mainstream & the best of the independents out there…but there are likely still a lot of late-night conversations between Jasmina and Joel to be had about where to take it all next…and locking into that will be the key.  I think what killed The White Stripes was too many ideas and not enough ability between the two players.  I think what killed The Black Keys was one idea done multiple times.  Play Pretend and their style/sound already fit perfectly somewhere in the middle of those two bands…so you see what I’m saying here just as easily as it could be charted on a graph; if they can find the balance between those places somehow and find their own identifiable space there…I think they’ll have it made.

Find out more about Play Pretend at their official Facebook page here:  https://www.facebook.com/pg/playpretendband