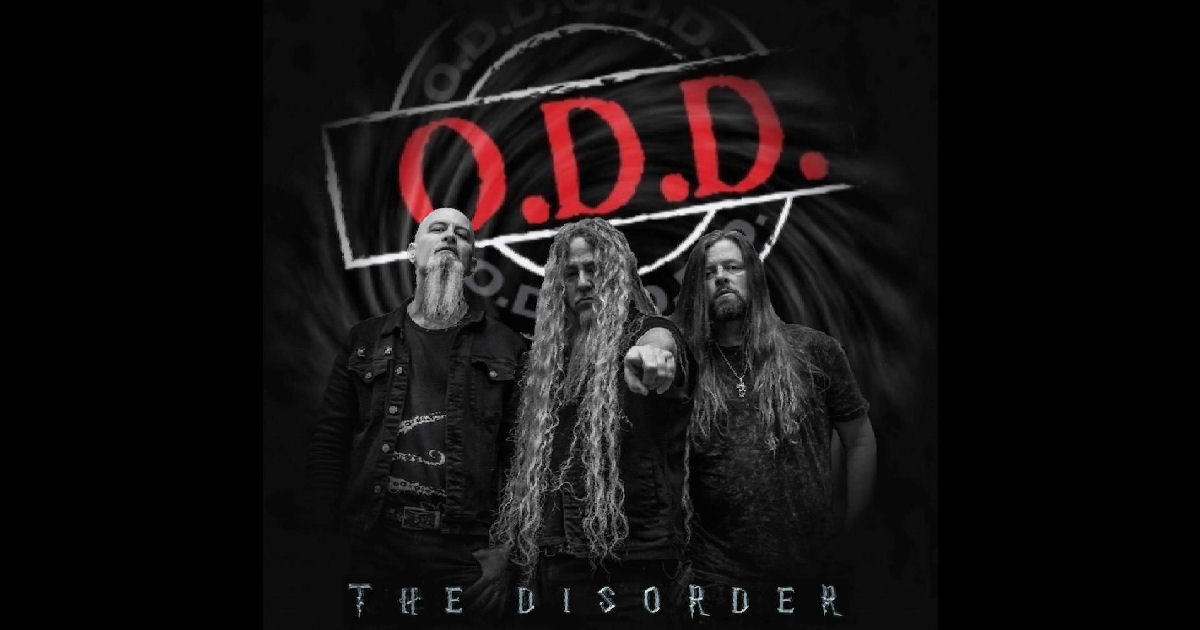 Always risk involved with a statement like “influences like Kiss, Black Sabbath, Rush and Led Zeppelin are glaringly obvious…”  To be fair to O.D.D., this insinuation refers to their debut self-titled EP…and we’re talking about the new record, The Disorder EP today…I’m just saying it’s one hell of a claim to come out comparing yourself to ALL of the biggest of the big; the list is short by about one Elvis, a Pink Floyd and a defined choice between The Beatles and/or Rolling Stones and I’d say they pretty much covered it.

Thankfully, that’s just something that caught my eye while scanning their social media…there’s not a band on that list of comparisons that would suit this new EP that O.D.D. has got…though I’ll be happy to offer some new ones that’ll give people a much better idea of what they’re in store for with this band.  I have no doubt whatsoever that this sound is a TOUGH sell to the masses; but in saying that, I know I can’t be telling O.D.D. anything they wouldn’t already be aware of – they’ve got an extremely hybrid style that is no doubt similar to many bands they already love.  While I’m not hearing that classic-influence that dominated their debut self-titled EP – perhaps what we’re hearing on The Disorder EP is a step closer to the modern that occurred throughout the decades to follow…think less Rush or Kiss and start thinking more along the lines of Faith No More (R.I.P. Chuck), King’s X, and Panic Channel.  Every one of those bands would have experienced a similar struggle in staying true to themselves while taking critical beat-downs at every point along the way, all in effort to bring a new dimension to hard-rock/metal and give it some substance and depth…you know…that stuff you actually WANT to listen to.

But if you can’t hear all three of those comparisons I just made in the opening track “Executive Order” – then you’ve been asleep for some pivotal moments in music history.  Faith No More ALWAYS struggled to convince the mainstream – you could actually make an argument that King’s X made it closer to it than they did…and as for Panic Channel, well, even with Dave Navarro, it barely got off the ground.  We don’t all make music for the purpose of mainstream success of course…depends on what the goals are; but now think about those same projects and the dedicated fans they produced and maintained.  It’s not even an argument – people do LOVE the sound of a band like O.D.D. – it just has a tougher road ahead than most to get it out there to the people as the combinations in their style borrow a piece from each decade from the 70’s forward, which can often result in a mixed experience for the average set of ears.

As this being said, all comparisons and influences aside…I really freakin’ liked this EP a LOT.  For my ears personally, this kind of creativity in hard-rock/alt-metal is not at all tough to enjoy or get in the mood for – I love this kind of energy and ability to mix up a melting pot of rad sounds from music’s history.  While I’ll still be the first to say they’ve got a tough road ahead of them to convince the masses – I also know firsthand that this kind of record and sound will really hold up strongly from year to year; essentially, I love what I’m hearing on The Disorder and I’m absolutely positive that short of a full lobotomy, I will more than likely still love this EP years and years from now as well.  There are massive strengths here.

For instance – the way this record begins with “Executive Order” – if this doesn’t hook you in immediately then what the HELL are you after when you’re listening to rock-anything?  The insanely rad pace and incredible tone they get instantly out of both the guitars and drums is as spot-on enticing as it gets and starts the EP on the firmest of ground.  The vocals come out sounding as solid as you could ever hope for – compelling and strong on their own, perhaps even better with the surrounding harmonies.  I can hear an argument for a bit more presence of the bass on “Executive Order” by comparison to the rest, but c’mon now…you gotta give a band the opportunity to play with their sound and explore its potential to give you something new track-to-track.  Starting The Disorder EP like this gives O.D.D. the ability to expand even further as the set progresses and you’ll notice the punch of the low-end rise to meet the challenge on the tracks to follow.  But I want it said, stated and KNOWN – “Executive Order” is one hell of a beginning to a record.  When O.D.D. kicked-in to the chorus for the first time on their opening cut, it was like an immediate sigh of relief & comforting feeling that felt like everything is indeed going to work out for these guys on this EP.  “Executive Order” is a brilliant start to The Disorder and a completely solid contender for a lead-single I’d imagine – it’s bold as it gets and bound to grab the attention of anyone within earshot through its versatile movements and gripping sound.

The closest they’ll drift towards the classics on this EP is in the second track, “Label Killer,” where you can probably pick out a few of those referenced influences like Sabbath and Zep a bit more.  I wasn’t as stoked on this second cut as I was generally with the others – but I’d still argue that this is a pretty gnarly tune overall.  My main beef with it would probably be that main guitar-line with the chops & squeals where we do feel that comfort and familiarity of what we’ve heard in the past of music’s history; but I also felt that on a structural-level, O.D.D. manages to pull the song forward into the future, maybe even before its time.  We’re still waiting for the world to catch up to bands like Faith No More, King’s X and Panic Channel – so you can kind of see what I’m getting at here when I say it’s a tougher sell; those that ‘get it’ get it – those that don’t have much more difficulty accepting progressive ideas and complex structures like these.  PLUS – I don’t want anyone to get me wrong here….those guitars might sound more ‘familiar’ yes – but the fact is that they’re also played with tremendous skill and that really DOES have an impact in pulling you in to listen to the way they grind through the EP’s second cut.  You could also potentially argue that lead-singer HDS also brings “Label Killer” closer to a Sabbath sound/style through the approach to the vocals – but in doing so, you might have to acknowledge the damn-near Van Halen like chops, tones and crunchy chords of the guitar as well.  It’s a meatier tune by the time it’s all said and done…it still has hooks, clever transitions in sound and enough force to capture the attention, but perhaps dives into slightly more niche territory, narrowing the audience a bit on “Label Killer.”  I’m also a firm believer in the Nirvana-posed theory that no song should ever fade out…at least not when it comes to rock; but it’s subtle clues within the music, style and production like this that show the real roots of their influences truly do come from throughout many points in the timeline of history.

The Disorder continues with wild energy ripping through the opening of “Loud Fighter” like you’d hear in a cut from The Panic Channel…and over time, through the chorus, they punch those final lines of the vocals with harmonies like you find in King’s X tunes.  O.D.D. has found a really insightful balance of power in these songs they write…while there might be comparisons to be cited in each song, they’re completely BRINGING it at every possible moment and real credit needs to be given to a band like this for putting out a record like The Disorder EP that doesn’t contain a single misstep or something that needs to be changed.  I’d have to firmly believe that they’re making the music they really want to make here – and I think you can tell that by just how invested they clearly are in every part they play.  They’ve got madly intense musicianship working in their favor, production is tight AF…you really can’t complain about much when it comes to the execution of this record, it all comes down to whether or not the material itself is the kind of sound you dig.  The crossover appeal of a band like O.D.D. is massive – listen to the way they effortlessly blend sounds and styles on “Loud Fighter” for example; the way this song twists and turns through each part is audible perfection.  Each part of “Loud Fighter” is played like it’s the main-hooks and chorus…as a result, every part of the song has something to offer the ears and a genuine chance of being the sound that brings you back to listen to O.D.D. over & over again.  Dig the final switch and grind towards the end…I also stand by my previous comments on fading songs out.

The Muffer has been more than impressive on the drums from the first seconds of this EP and remains that way right to the end, thundering and storming through the final song, “The View.”  Everything gets harder, more beastly and more aggressive as O.D.D. cranks up the intensity even higher at the EP’s end to establish that memorable impact and give us 5:45-worth of more reasons to repeat this experience.  Gunny’s bass comes through solidly to add the depth into this last cut and sounds fantastic throughout the deep grooves in the song’s middle with the record’s best guitar-solos soaring over top.  See what I’m saying?  O.D.D. ‘gets it’ – not only do they own their sound/style here at the end with authority – but the way they never let up the focus on this final tune in this progressive set of songs shows they really knew how to lay out The Disorder in a way that’s sure to have you coming back to listen again.  It’s a structurally sound EP from wall to wall…no mistakes, no missteps, no drops in the production or performance and the evolution of their set from song one to the end moves in a way that ensures we stick with it as listeners.  I think “The View” is likely a little less accessible to the masses overall & probably appeals more to the alt-metal crowd – but I can certainly imagine a whole shitload of people getting into this crew for the sheer stunning level of execution and power they put into their material.

For the sheer fact that you truly CAN hear the influence of decades of rock & metal throughout this entire EP and four-song set – I have to believe that O.D.D. stands a fantastic chance of being able to BE that band that gets some additional ears on their side from the immaculate effort they’ve put in here.  It’s a level of execution that truly warrants a listen, whether or not it’s your style/sound is almost beside the point here – if you’re one of those people out there that swears they’ll listen to the best in any genre no matter what it is…then it’s time for you to get onboard with O.D.D. and ride this crazy train.  These guys are fantastic at what they do and audibly one of the most dedicated to their music & focused bands that I’ve heard this year – excellent job on this entire set, without question.

Find out more from their official page at:  http://oddtheband.com/